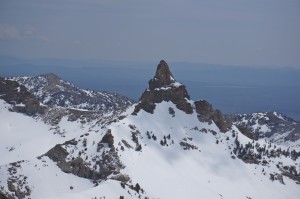 The Ruby Range’s best-known feature is Lamoille Canyon, a huge U-shaped glacial valley with several tributaries. Rather than immediately exiting the range, the Lamoille glacier carved its way north along its spine for several miles before turning west. I wanted to spend at least one day exploring this area, and picked out some peaks at random, based on my road atlas’s low-resolution topo and knowledge of the class 2 route up the first peak, Thomas (named for a man who died rescuing students on an ill-advised winter trip).

A paved road leads most of the way to the valley’s head, though I found it blocked by snow at the “Terraces,” a few miles from the end. I hiked the road until I was across from the stream leading down from Island Lake, then took off straight up the brushy hill, eventually reaching snow near a bridge over the outlet stream. As the slope steepened and the chute leading up Thomas’s east ridge became visible, I put on crampons — no snowshoes today — and cranked out the elevation to the ridge. Crossing the ridge, more of a broad plateau, I tagged both of Thomas’s summits, finding the survey marker on the north one.

Then things got tricky. Glacier-carved ranges tend to have U-shaped valleys, and these valleys can be separated by sharply-carved fins, knife-edges, and horns; the rest of my day consisted mainly of dealing with these features. Dropping down Thomas’s south ridge, I opted for the steep snow-slope to its east rather than dealing with the partly snow-covered knobs on the ridge itself. This worked for awhile, but the snow eventually turned to wretched slush, so I returned to the ridge crest, where I found easier going than I had expected.

This ended at a large step I had noticed on the way up. I bypassed the first overhanging drop by descending on the snowy, shaded west side and following a ledge back to the ridge. At the next overhanging step I downclimbed the dry rock on the east, then crossed a bit of snow before regaining the ridge-top. Full House itself was a simple class 2-3 affair, with none of the impassable steps found on the way down Thomas. Its south ridge was a bit trickier, but not too hard.

All I knew about Snow Lake Peak was that it existed, and perhaps, subconsciously, I thought that a peak named after a nearby lake would be easy. It sure didn’t look that way from the north, with a steep, knife-edge ridge with a couple steps leading to the summit, and a sheer north face. I thought it would probably be a walk-up on the other side, but decided to try the ridge before going around to the south.

The peak appears to be made of steep, terrible rock, but other than loose stuff lying around on flat surfaces, the rock is surprisingly solid, with abundant features making some near-vertical sections no harder than 4th class. It was, however, relentlessly exposed, and between the loose rock on ledges and the occasional snow wetting my soles, I found it a worthy climb with my current atrophied scrambling ability.

Reaching the summit, I realized that I was standing on a perfect glacial horn at the intersection of Lamoille, Thomas, and Stoddard Creeks; there was no easy way down. With good weather and plenty of daylight, I decided to continue to Fitzgerald, the next peak west around Thomas Creek. Snow Lake’s west ridge was slightly easier than the northeast, but still involved lots of exposure and a few steep 4th class downclimbs.

Glad to be back on snow, I picked and post-holed my way along the ridge to Fitzgerald, visiting the cairns at each end of its summit cat-walk. I even took a bit of a summit nap in the sunny calm. I thought about finishing the traverse by tagging the apparently-unnamed peak between Thomas Creek and the Right Fork of Lamoille Creek, but decided to simply drop to Thomas Creek, take its trail back to the road, and walk the road up to my car. This would hopefully involve less post-holing than returning east to the road’s end.

The return was hugely unpleasant, with endless ankle- to knee-deep slush sometimes combined with shrubbery. However, when the obnoxious afternoon thunderstorms returned, I was glad to be in the bottom of the valley. The road-walk was longer than expected, but a friendly local offered me a ride for the last bit. He had spent most of his life in the area mountains (heli-skiing!), and had some suggestions for more to do in the Rubies. Some other locals I met mentioned some rock climbing in the area, and I see a dozen or so route on Mountain Project. There is probably much more scrambling and climbing to be found; too bad it’s on the back side of nowhere. 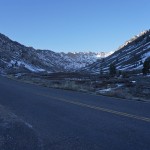 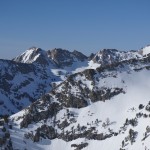 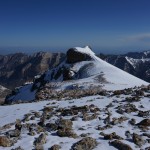 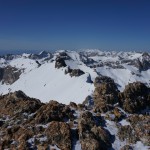 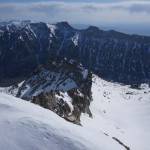 Glacial tributaries to Lamoille from Thomas 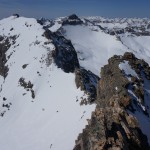 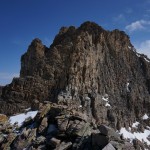 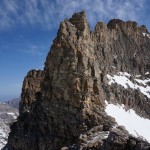 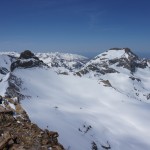 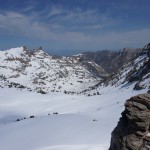 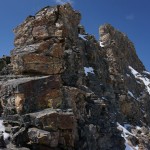 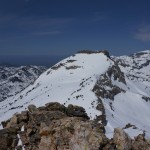 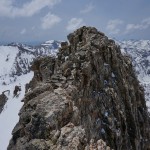 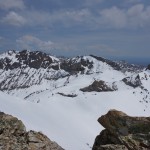 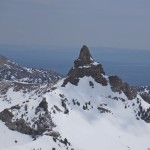 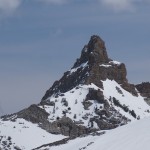 Snow Lake from NW on descent