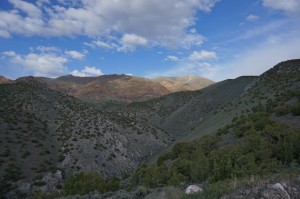 Northern Nevada has a certain ascetic beauty lying partway between the lifeless desert of central Nevada and the high plains of southern Wyoming. Star Peak is an ultra-prominence peak right off I-80 northeast of Reno. I saw it as I drove up a random jeep road that seemed to head in the right direction, and may have even summited the next day.

The weather forecast was dismally accurate; I woke to what sounded like rain, rolled over to listen to a podcast, then actually looked outside to see that while it was warm, the precipitation was snow. I had no excuse. I dug my snow gear out of the back, then began squelching up the remainder of the road through inch-deep muck covered in a thin layer of snow. Where the road ended, I continued straight up a broad ridge past a sort of animal pen. I found a portion of what might have been an old road farther up the ridge, but mostly just wound through junipers, sage brush, and deepening snow.

I eventually reached a cairn from which I could see nothing higher within the 100 yards of my snow-limited view. Continuing northeast-ish along the ridge past the summit a bit, I still saw nothing higher, and the snow was 5″ deep and still falling, so I turned around. I had hoped to loop over a couple of other peaks, but doubted that I could find my car unless I retraced my tracks.

The crux was probably driving back to the highway. Returning to the car thorougly soaked, I managed to turn the key in ignition with both stiff hands, then carefully inched down the steep mud. Fortunately there were only two small uphills on the way to the valley floor, because I was essentially paddling up both, coating my entire car with mud while barely making uphill progress. After nearly three weeks of cooperative weather, my luck has apparently run out; tomorrow looks like more warm weather with thunder-snow. 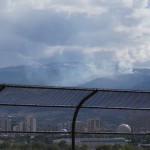 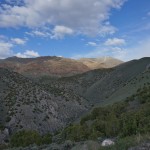 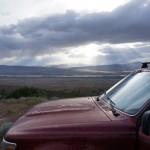 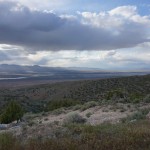 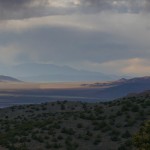