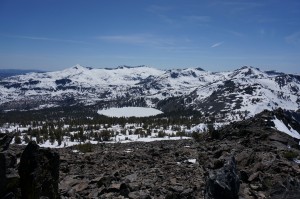 The Desolation Wilderness, at the southwest corner of Lake Tahoe, contains three SPS peaks and some of the best scenery in the northern Sierra, notably the sprawling, island-filled Lake Aloha. Having seen others’ pictures, I was looking forward to visiting this region more than most I am exploring this month. Starting from Glen Alpine, on the eastern side of the area, I climbed Pyramid, Price, Jacks, Dicks, and Tallac in a scenic, slushy, and tiring 10-hour loop.

I woke at dawn at the popular Glen Alpine trailhead, filled out a free pass, and was on the trail/road by 6:00, passing several shuttered summer homes and/or abandoned buildings on my way to the former site of a sort of dude ranch. The road turns to a trail, which heads west-southwest toward Gilmore and Susie Lakes. My plan was to do the long, snow-covered commute to Lake Aloha while the snow was harder, but very little had re-frozen in the warm night, and east-facing slopes were already slushy, though not too deep.

I lost the trail around Susie Lake, but continued to where I knew Pyramid was, and soon came upon Lake Aloha, the highlight of this outing. In the summer, it is an expansive, shallow lake filled with small islands. Now, however, it was still mostly frozen. While this detracted from its scenic value, it did allow me to cross the lake rather than hiking around. Once past the lake, it was a long, east-facing slog to Pyramid’s summit. While I did put on crampons where the slope steepened, I probably could have reached the summit without them.

I could see the rest of the day’s work from Pyramid, and it looked dauntingly far. I skied partway down Pyramid’s east side, then scrambled along and over the ridge to the west face, where I was surprised by the hard west-facing snow. I put on my running shoe spikes, but their short, worn points were barely adequate to keep me in place on hard snow with a thin, soft layer on top. Making my way across the slope, I climbed the interesting-looking unnamed peak before Price, then continued to Price’s less-interesting summit.

Getting off Price proved surprisingly tricky with the hard snow to the west. It is necessary to continue northwest a short distance from the summit, until one can downclimb the east side of the ridge to the snowfields below. After backing off some sketchy downward step-cutting, I eventually found my way off, and had a short glissade down some wretched slush to the ridge leading to Mosquito Pass. I descended to the pass on slush, then found a mostly-dry line up to Jacks Peak. From Jacks, Dicks is a straightforward traverse to the north.

Dicks seems to be popular among ski mountaineers, who appreciate the broad north face dropping to Dicks Lake. The long traverse to Tallac seems somewhat less popular, and with the mid-day sun having turned almost all snow to some depth of slush, it was a wet, slow, grim affair; unexpectedly running out of water partway did not help. I put some slush-balls in my bladder, and periodically sucked a few drops through the hose as they melted against my back.

Finally reaching Tallac, I had a snack and a bit of a nap on the summit, perfectly comfortable in just a t-shirt. On the return, I planned to drop cross-country and intersect the outgoing route somewhere above Glen Alpine. I followed bits of trail more or less toward the trailhead, then lost them and followed a stream, then regained a developed trail that does not appear on any map that I have seen. This trail crosses the steep, brushy slope north of Glen Alpine, then switchbacks down through some talus to end on the fire road leading to the trailhead, no more than 50 yards from my car. Score! 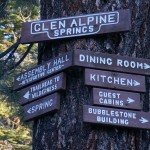 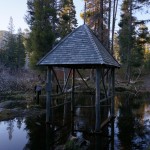 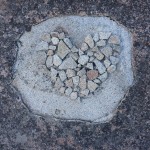 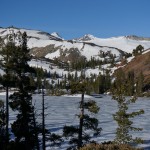 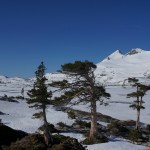 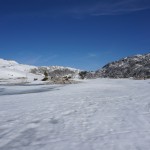 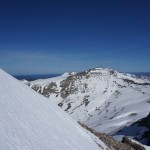 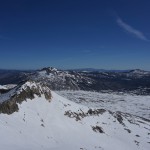 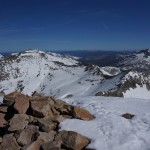 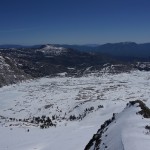 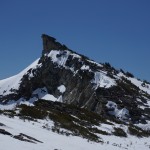 “Beak” between Pyramid and Price 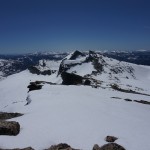 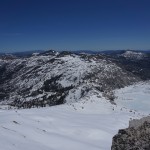 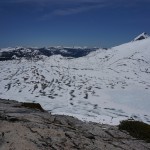 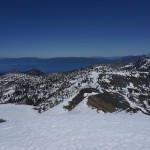 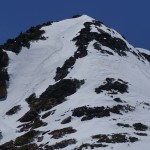 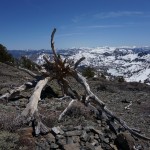 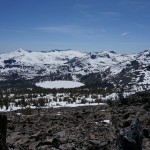 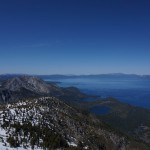