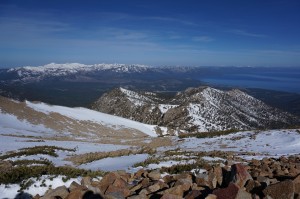 Though Freel is the highest peak around Lake Tahoe, it is a very short day thanks to a dirt road to around 9,000 feet on its south side. Being both tired and pungent, I needed a short day, so after sleeping partway up the dirt road, I continued through a couple snowbanks to the “trailhead” below Armstrong Pass. For some reason, I decided to follow the trail rather than head straight up Freel’s bare south side. I joined the Tahoe Rim Trail, which I found to be mostly snow-free as it traversed a west-facing slope toward Freel. In the soft dirt, I saw fresh tracks from a bear that seemed to be making pretty good speed, but I never saw him.

The plan was to follow this trail to the saddle northwest of Freel, then head up the ridge. However, as the slope turned north, the trail became increasingly covered with steep, hard snow. I eventually gave up and just kicked steps straight up the slope, grabbing trees and rocks, and trying to stay not too far above the nearest obstacle in case I slipped. Finally reaching the ridge west of Freel, I continued along its crest to the summit, amusing myself with a little gratuitous class 3-4 on some small crags. Not having done any climbing or serious scrambling in awhile, I needed the practice.

It was pleasantly warm and calm on the summit, with good views of peaks to come: Pyramid, Tallac, and, further north, Granite Chief. I took the direct route back to the car, skiing down sand and scree on the south face, then following cow-paths through the brush and trees to the car. Ascending this way would probably have been faster than my dumb way, but also hot, frustrating, and without the Tahoe view. 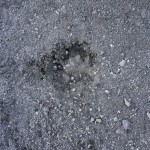 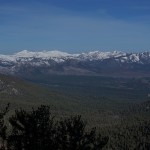 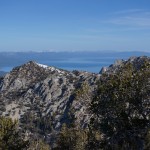 Tahoe from partway up 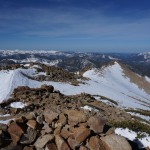 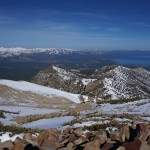 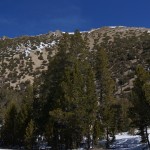