Elephant Back, Round Top 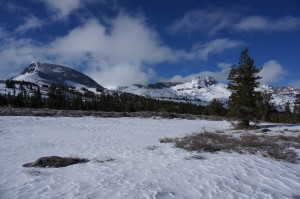 Despite its name, Round Top is actually a decent-looking peak when seen from the Carson Pass area to its north, and hosts several interesting routes. Thanks to crazy wind, what should have been a few hours’ work in the morning turned into an all-day affair, with an afternoon outing to the west ridge needed to finish off the peak.

I set off from Carson Pass nice and early in running shoes, only to return to the car when I realized that it was a bit too cold for that. Finding that my mountaineering boots have stiffened and/or shrunk too much to be useful, I added some bread-bags to my feet and started again. I planned to do a loop, starting with Elephant Back, then continuing up Round Top by its east ridge. After slogging up the loose rock to Elephant Back’s summit, I descended to the lake near Round Top’s north side.

Conditions were not pleasant — I had my hood up, and was wearing goggles and heavy gloves — so I did not want to doff gloves to put on my crampons. Fortunately, I managed to find a gentle enough line to reach the ridge by just kicking steps. Starting along the ridge, I reached a saddle where it steepened and narrowed, and planned out the best way to cross a short section of steep snow. Crossing the saddle, I was nearly knocked over by the wind, and had to crouch and drive my ice axe into the snow to avoid being knocked over. Traversing a long ridge in these conditions seemed stupid and not fun, so I returned to the pass.

With most of a day to kill, I drove over to the start for Mokelumne, next on my list, to find the road still gated at the highway. Drat. (I probably could not have done Mokelumne in an afternoon without headlamp time, anyways.) Killing some time poaching internet at Kirkwood, I noticed that the wind seemed to be dying down, and decided to give Round Top another shot.

This time I came at it from a lake west of the pass, aiming for the west ridge. The ridge turned out to be an easy climb with a bit of fun, blocky 3rd class near the top, and the wind had calmed down enough that it was even pleasant to hang out on the summit. Mission accomplished, I headed back toward Mokelumne for the night. 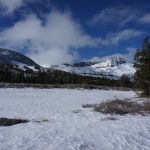 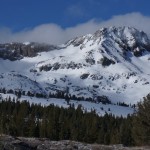 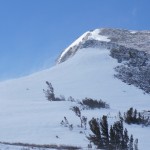 Spindrift on Elephant Back 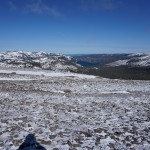 West from Elephant Back 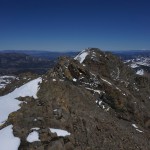 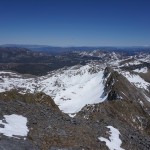 Round Top’s east ridge from summit. 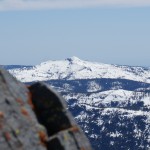