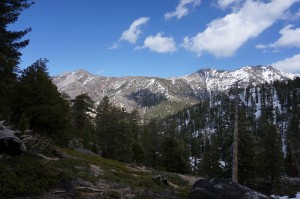 Most northern Sierra peaks are not that interesting in the summer, but snow adds some challenge and improves the scenery. Highland and Silver are two peaks near Ebbetts Pass, a crazy 1.5-lane road through the Sierra between Carson and Sonora Passes. The normal route either follows the PCT from the pass, or follows another trail up the valley between the pass and peaks; I chose the former. The peaks are surrounded to the west and north by more impressive-looking, rotten black crags.

It’s hard not to love the Sierra. While most parts of the Rockies become a hellish slush-bog below treeline when they melt out, the Sierra become a mixture of hard-packed snow and nearly-dry dirt. I started on snow from the PCT trailhead, contouring along the west side of a valley across from the peaks, eventually picking up bits of the PCT near the head of the valley. I followed the trail where it poked out from beneath the snow, then left to crampon up and across a steep snow-slope to Highland’s southwest ridge.

A fairly obvious use trail leads up the ridge to a large and frustrating false summit, then seems to disappear. I continued across snow and tundra to a saddle, then on to the actual peak, where I found the usual suspects in the register. Silver isn’t on The List, but I was not in a hurry, so I continued traversing over its false summit to the north end of the ridge. It wasn’t especially interesting, but neither was it unpleasant.

If I had planned to tag Silver, I would have started from the valley, and the return would have been a breeze. However, I ended up returning to the Highland-Silver saddle, then boot-skiing down snow and dirt to the valley floor across from a stream leading back toward the pass. There was some thrashing near the bottom, but it was surprisingly efficient, and I eventually came across the road a few hundred yards from my car. I was back in Markleeville in time to take advantage of its cozy public library, then head out into a short blizzard to find a camp spot. 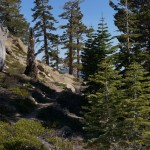 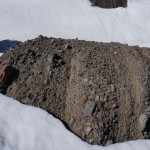 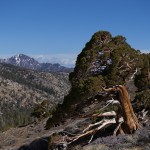 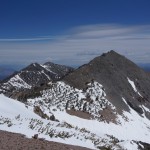 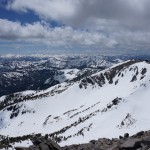 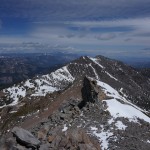 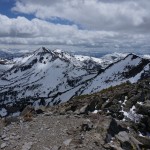 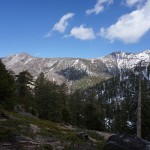 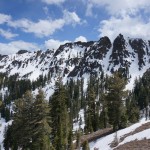