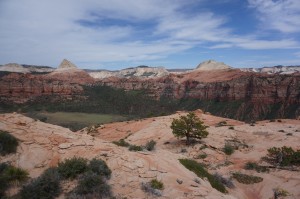 North and South Guardian Angels (NGA and SGA) are two prominent white fins near the Kolob Road on the west side of Zion. They are some of the harder peaks on the DPS list, the former because of a couple short 4th-class sections, the latter because of a tricky approach. Tabernacle Dome is a short, reddish dome west of the Guardian Angels, with an excellent view of both and no route easier than 5.2.

I got started a bit after sunrise under blessedly cloudy skies. The first couple of miles follow the well-established trail to the top of the popular Subway canyon, then a clear spur to the Northgate Peaks. After that, bits of use trail and footprints led to the base of NGA, where some no-hands slab-walking leads to the peak’s east shoulder. Most of the climb from here is class 3 or easier with careful route-finding, though there were a couple of trickier moves near a tree.

The crux is the final headwall below the summit ridge. I climbed some sketchy, exposed slabby terrain on the south side — never fun on sandstone — below the belay anchor, then worried about the downclimb as I walked over to the summit. The chilly wind and thoughts of getting back down made me disinclined to hang out, so I soon retraced my steps. Fortunately, I found that the north side of the headwall is much easier class 3-4. After that, it was mostly an easy walk back down to the dirt and brush.

Now to try to reach SGA, on the other side of the Subway. SummitPost describes two routes: first, one can follow the Subway from its head to an exit on its south side; second, there is supposedly a cairned route from NGA directly into the Subway across from the exit. I started off heading east around NGA, hoping that the next canyon would contain the route. Unfortunately, it was brush-choked and devoid of cairns. Much sketchy slab-traversing later, I reached the crest of the ridge to its west, which provided an easy and brush-free path much of the way down to the Subway.

Nearing the base of the ridge, I returned to the gully, which was now broad and slabby. Unfortunately, it also cliffed out well above the canyon floor, and the brush-based violence began. Following the occasional boot-prints of a fellow damned soul, I traversed across ridges and down likely-looking side-canyons, trying to head east and losing elevation, back-tracking several times to avoid cliffs. The terrain was a repulsive mix of manzanita and oak-brush atop pine duff and floury sand, often near its angle of repose.

I finally found a thrashable ramp leading to the subway, where I chose at random to head up-stream. Only a short distance up, I found what might be a way out the south side, with the suggestion of a few old footprints, and sat in the shade to have a snack and prepare for the bushwhack back out. The north-facing side was covered in more wet-weather deciduous tree and shrubs over steep duff, but thankfully no poison ivy; after the spiny descent, it was almost pleasant. Amazingly, I seem to have guessed right — at least, I escape the Subway via a bit of easy scrabbling up a broken chute.

I couldn’t see SGA from where I emerged, but took my bearing from NGA and headed south-southwest through — yep — more manzanita and oak-brush. One ridge over, I reached a sandy ravine and spotted SGA’s white tip beyond some red buttes. Following either the ravine or bits of use trail where it was choked with driftwood or brush, I eventually emerged on slickrock southeast of SGA. From there, it was a scenic, fun slab-romp to the summit, where I was both warm and tired enough for a short summit nap.

Rather than try to find the direct, cairned route on the way back, I decided to just take the Subway. Other than one short wade through thigh-deep stagnant water, I was happy with my choice. The canyon part, though short and not too scenic, was at least cool, and the canyoneers had worn a nice trail through the manzanita. Higher up, the route followed sporadic cairns across acres of cool slickrock. I even felt energetic enough to jog the last, flat mile of trail to the car.

After the SGA bushwhack from hell, the short stretch of brush between the road and Tabernacle Dome was as nothing. I found the climb exactly as described on SummitPost: First an initial steep pitch with a helpful log, then a bit of stemming in a steep chute, led to the hoodoos. Getting through the hoodoo-and-brush maze was a bit of a pain, but not so bad. The upper, exposed part was a breeze on the way up, with some nice underclings to up the friction on the steepest part, and good clean rock providing enough friction to do most of the rest hands-free.

After fighting the wind to take some photos from the summit, I retraced my steps. The crux slabs were trickier on the way down than I had expected; maybe I’m rusty so early in the season. After some cautious downclimbing, I managed to get lost briefly in the hoodoo maze, but eventually found the stem and downclimb, and brute-forced my way back to the car. Tabernacle Dome is definitely worth it as a “dessert” after a bigger outing in the area. 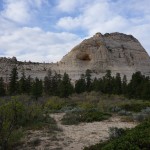 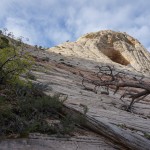 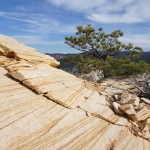 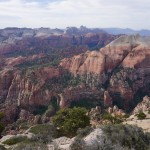 SGA and Subway from NGA 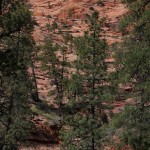 SGA peeks out behind red stuff 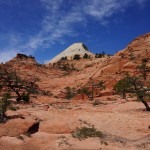 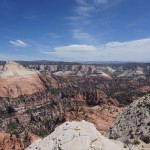 NGA and Subway from SGA 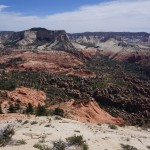 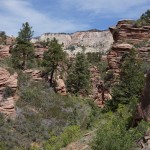 Top of chute into Subway (not obvious) 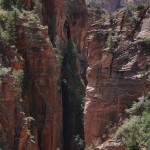 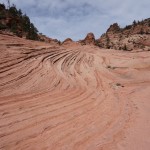 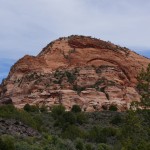 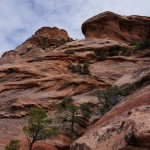 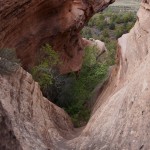 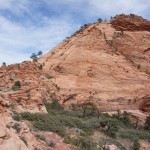 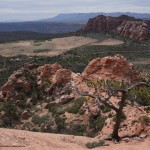 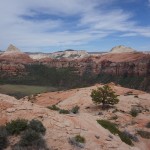 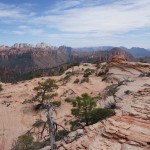