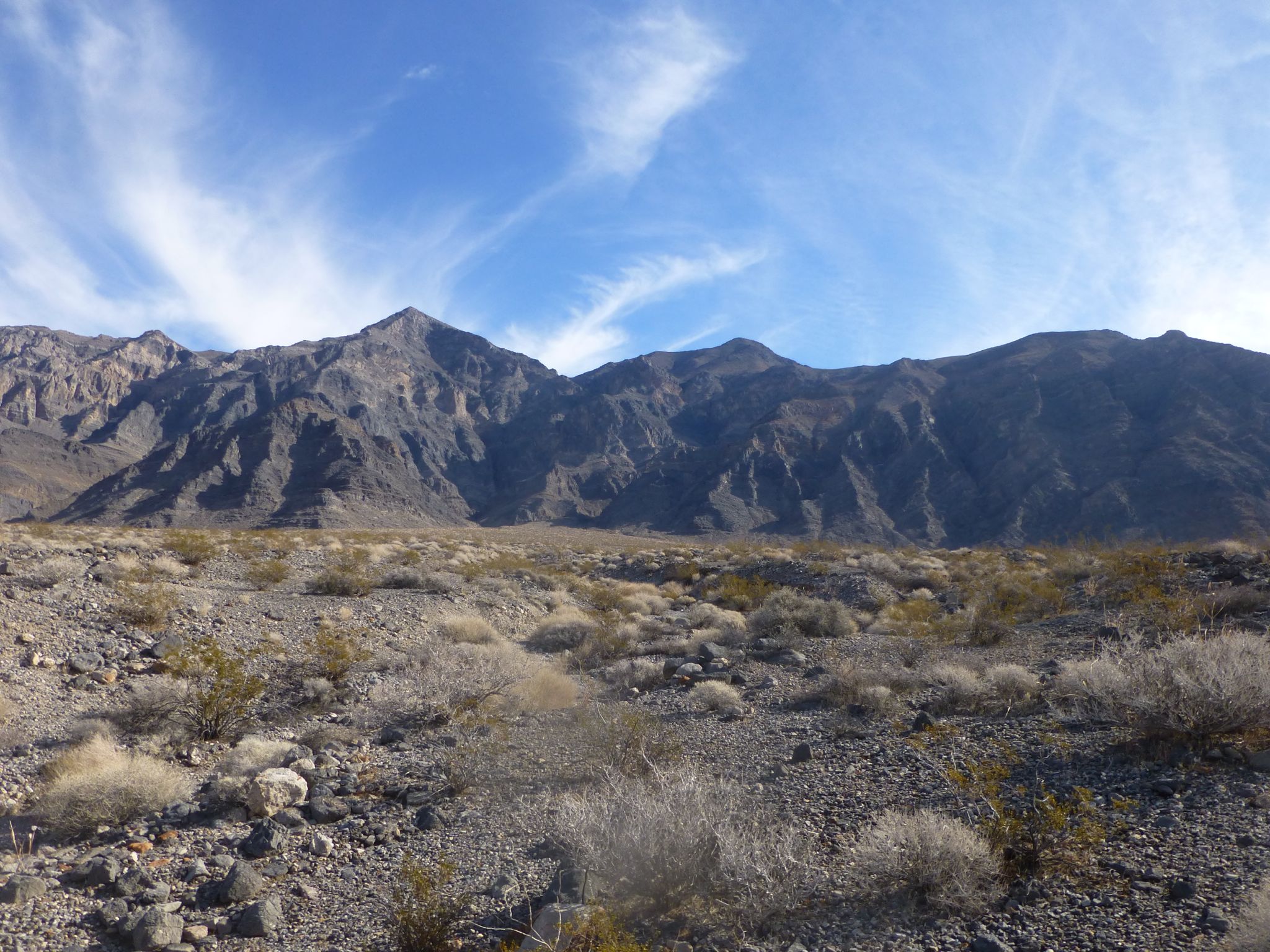 Having noticed Pahrump Point and the Nopah range while driving by the day before, we decided to tag something there on the way back to Vegas. Unofficially-named “Nopah Point” is the range high point (not to be confused with Nopah, Moapa, Mopah, or Umpah Peaks), so we decided start with that and, time permitting, tag Pahrump Point afterward. After a night next to a dirt road and early-morning tire inflation, we headed south toward Shoshone.

The route description we found mentioned a rough dirt road leading toward the wash north of Nopah, but we found nothing of the kind. Instead, we found a well-graded dirt road extending less than a half-mile toward the peak before making a dogleg south. This seemed unpromising, and a combination of mud and aggressive “POSTED no trespassing” signage on a fork continuing straight from the dogleg led us to park at the intersection, some three miles from the base of the mountains.

After the classic Nevada experience of staring at the same scenery for over an hour while crossing a valley floor, we reached the base of the large wash between Nopah Peak and “Nopah Point.” After some disagreement about the route hinging on the distinction between a “gully” and a “wash,” I acquiesced and climbed a miserably loose dirt slope to reach the ridge directly in front of us.

It looked like we would have to nearly return to the right-hand gully to bypass obvious cliffs above, but I figured I might as well see what else could be done. After side-hilling along light-colored ground for awhile, I headed up a fairly stable class 2 gully to a higher shelf closer to the base of the main cliffs. My partner, continuing on the lower shelf, soon reached an impasse. It looked like it might be possible to pick one’s way up and around the south side of the cliffs and into a gully to their east, so after calling down to her that my way would “totally go,” I found a seat and listened to a bit of music.

Fortunately for me, my way worked pretty much as expected, with some fun 3rd class climbing on solid black rock and not too much cactus. From there, easier scrambling led to Nopah’s west ridge, where a line of cairns led over many false summits to the true one, festooned with mysterious boards and wire. I looked over at Nopah Peak, but even imagining Bob’s disapproval, I could not summon the motivation to hike over to the lower summit. I had been smart enough to bring my down jacket this time, so I was happy to lounge around on the summit instead.

Not relishing the thought of reversing our route, I figured I would try to find what I believed to be the official route down the southern gully (or wash). There were enough cairns and bits of use trail to suggest that it might work, so down we went along a ridge south of the southern canyon/gully/wash. Seeing a lone cairn on an especially loose and steep slope, I slid and picked my way that way until I reached an impasse, then headed back toward the head of the canyon, hoping to intersect the bottom.

As I had hoped, we found more frequent cairns leading into the canyon. Though it looked ominously narrow and steep, the bottom of the wash was mostly fun class 2 boulder-hopping and scrambling. The one exception was a cliff band near the bottom, bypassed by an improbable, loose 3rd class downclimb to its left. From there, more boulders led to the mouth of the southern gully/wash/canyon we had passed in the morning. Though we managed to reach the desert by nightfall this time, we still ended up putting in some headlamp time. Fortunately my partner had remembered to add a GPS waypoint for the car, because we were not as accurate on our return as we were the day before. 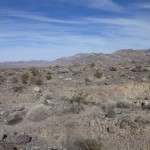 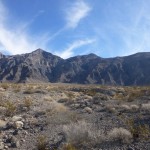 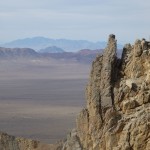 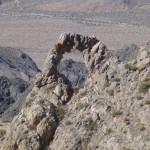 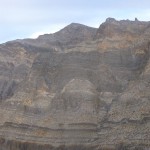 Looking across at ascent from descent 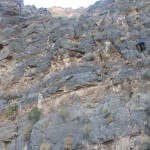 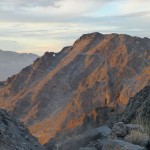 Dusk near mouth of wash, with another arch.