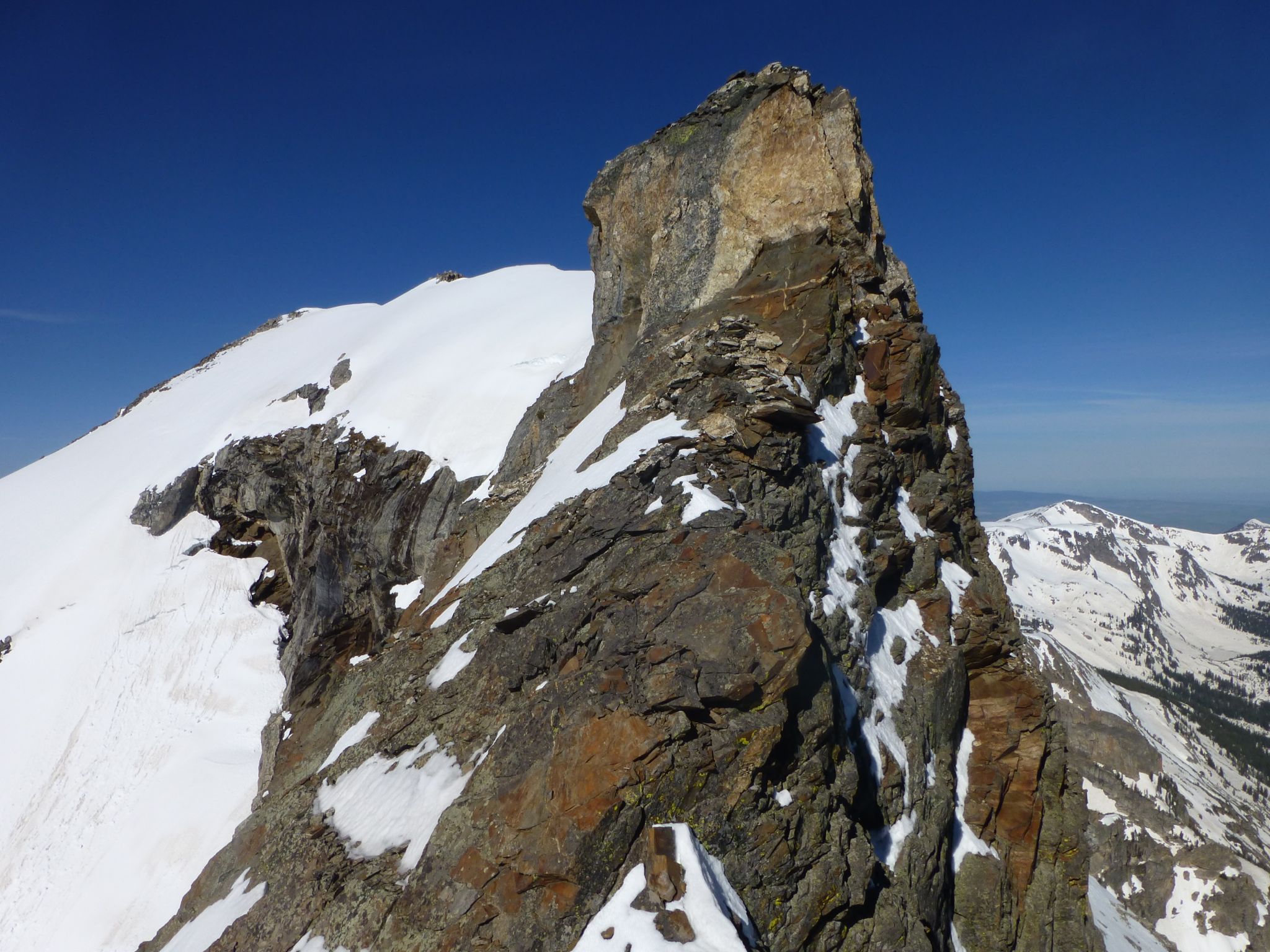 With an unexpected day off, I had to quickly come up with something to climb. The previous day’s early-morning jaunt up Teewinot had left me too tired to do anything too big, and the short notice gave me too little time to prepare mentally for anything serious. I had yet to climb Woodring, which Ortenburger describes as a nothing-burger, but which has a non-trivial east ridge. The summit has views of some of my other objectives, and I had yet to see Paintbrush Canyon, so I threw some stuff in my pack and set my alarm for a “lazy” 4:00 AM.

After breakfast and a drive up to String Lake, I got started a bit before 5:00, using my headlamp for only a few minutes in the woods. The Paintbrush Canyon trail is about 1.5 miles around either side of String Lake, and by sheer luck I chose to go around south, avoiding the northern route’s lack-of-bridge. As the trail turned west up-canyon, I looked north at Leigh Canyon and Mount Moran and wondered again why the preferred non-canoe approach goes around the north side of Leigh Lake. While the bushwhack from Paintbrush to Leigh is supposedly horrid, it is much shorter both on- and off-trail than the northern route, which is itself fairly awful.

Continuing up-canyon, I met a few patches of snow, then crossed the bridge where Ortenburger says to leave the trail. With almost no bushwhacking, I reached the base of a partly-melted snow chute. Avoiding the gaps and waterfalls via slabs and steep ground to the left, I regained the snow through some krummholtz, then put on my crampons and chose a line up a narrow, steep rightward branch of the main chute. Much of the snow was too soft to require crampons, but the snow in the avalanche runnels was still hard. I was sweating profusely in a t-shirt and, feeling yesterday’s effort, stopping to rest more often than I should have.

I finally reached the ridge at a notch with a view down into Leigh Canyon, and found most of the rock to be bare and dry. There were several minor sub-summits between me and the summit, a few of which were annoyingly vertical on their west (back) sides. While I gratuitously 5th-classed one, they were easily passed on the north without losing unnecessary elevation. The one seemingly-unavoidable difficulty was a steep, golden face near the summit. After pulling out several loose flakes and blocks, I climbed it via the short, angled 5th-class crack on its right.

From the summit, I took in some views useful for future objectives: upper Leigh Canyon and Grizzly Lake, and the north faces of Owen and the Grand. I looked over at Paintbrush Divide, and briefly contemplated coming out via Cascade Canyon. Then I saw a nice flat rock, and the warm sun and my early start got the better of me, causing an hour nap in just my t-shirt and overshirt.

I had noticed what appeared to be a fat snowfield southeast of the summit, perfect for the descent. The upper part was knee-deep slush by the time I started down, but mostly painless. Unfortunately, it hid a smooth cliff-band partway down. After some moments of unease, I found my way around the left side on outward-sloping but (fortunately) dry slabs. The snow became firmer as I descended, with excellent boot-skiing near the bottom. After a final altercation with 3rd-class bushes, I was back at the popular trail less than a mile above where I had left it in the morning, and a couple podcasts from the trailhead. 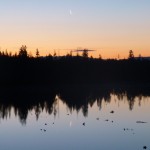 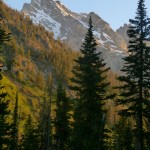 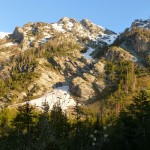 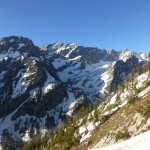 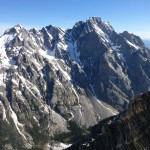 Thor and Moran from SW 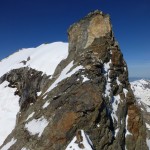 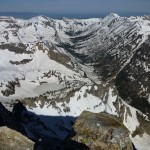 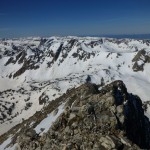 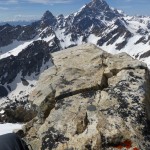 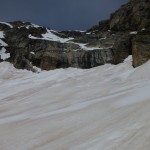