Broads Fork Twin Peak is yet another Wasatch 11k’ peak named “Twin.” The efficient peak-bagger tags it along with three (or five) of its neighbors along the ridge between Little and Big Cottonwood Canyons, coming from the north (Big Cottonwood). I had originally planned to take this approach, but it didn’t quite work out. However, in the summer or with a good overnight freeze, this looks like it could be a fun traverse.

Having experienced slush-wallowing lower down on the approach before, I hoped an earlier start at a later date would let me reach the ridge before things got bad and that, once there, the wind would have created decent conditions. So: crampons, not snowshoes. With a decently early start, I reached the beaver ponds at the end of the trail at a reasonable hour. A large avalanche had cleaned much of the old snow out of one chute to the ridge, so I was able to continue on dirt and rock most of the way to the ridge. (The Wasatch are uplifted at a sharp angle, creating slabs on one side of some ridges, which in turn create avalanches.)

The snow I encountered near the ridge was soft enough that my crampons were pointless (har!). Too soft, in fact, so I meandered upward between patches of harder snow and exposed rock. I had hoped to find a mixture of bare rock and hard wind-crust on the ridge, but even above 10,000′ it had been too warm: the wind crust broke unpredictably, and the uncrusted snow was calf- to occasionally hip-deep slush. It was rough going along the long north-south ridge, with its underlying mix of boulders, short cliffs, and trees.

After a brief stop at the summit, I allowed myself to hope that perhaps conditions would be different on the remaining east-west ridge. Alas, it was not to be. While the next two peaks, Sunrise and Dromedary, are only a short distance away, I had had my fill of misery for the day. After I sketched my way down some loose, steep rock to skip a bit more of the ridge, I reached the avalanche debris and snow in the valley. The return to the trail was not so bad, with a few glissades to reach the flat canyon bottom, and somewhat more solid snow once there. I generally don’t mind a downhill slog; with slightly colder overnight temperatures, I think the 3- or 5-peak traverse would have been fine.

End of the trail 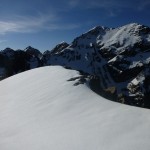 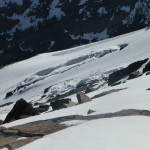 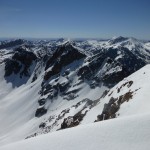 Rest of the traverse

Garbage rock on the return