Still recovering from what turned out to be a long recon trip along the Evolution Traverse, and faced with a dubious weather forecast, I needed something not too long. I also wanted something different. Though I wasn’t sure about conditions, I dusted off my tools, stuffed my crampons and boots into my pack, and took off for the north couloir on Feather. I had planned to climb it with some partners who bailed, but figured it would also work as a solo. Though the ice was soft after a warm night, and fairly sandy and nasty in places, much of the couloir was actual ice. Not having to carry extra gear, it only took me a bit over 8 hours car-to-car, of which 30-35 minutes were spent on ice, and another 30-35 talking to a friendly Scotsman.

The previous day’s rain had tamed the Pine Creek pack-trail’s dust, and I waited for first light to start, making for a pleasant approach. Someone has recently added cairns to the cross-country route to Royce Lakes, making the semi-familiar approach even easier. I met a few campers along the way, but didn’t stop to talk. Traversing up below Feather’s east face on some easy slabs, I reached the base of the couloir and stopped to put on suitable gear. Though carrying my boots and hiking in with trail runners required a larger pack, it made the long approach much more pleasant.

After briefly looking one gully to the right, I headed up the left side of the couloir, taking a line over a steep ice bulge to spice things up a bit. With the warm night and the previous day’s rains, the ice was fairly soft, though still hard enough for good placements most of the time. Above the first bulge, the angle was shallower but more sustained, meaning easy rests were relatively far apart. This made me aware that I was over-gripping my tools, a common ice-climbing inefficiency.

After about 30 minutes’ climbing, I topped out on sand and loose stuff just below the notch, stowed my tools and crampons, and scrambled up the short class 3 pitch to the summit. I found a “register” this time — a small bottle of paper scraps containing some familiar names from the past two years. The clouds to the west finally seemed to be coming my way, so I ate quickly and scrambled down the south face to the Royce-Feather col. While I had expected to need my crampons again, I managed to skirt the snow to the left until it flattened out enough to kick steps and boot-ski down to the upper Royce Lake.

Back in trail runners again, I made my way back to the trail, then put on some NPR podcasts and zoned out for the hike out. I was apparently paying too little attention, since I was thoroughly startled by a couple having a snack by Pine Lake. The husband asked if I was out dry-tooling, and I explained where I had managed to find my little patch of ice. He had done some ice climbing back in his native Scotland in the 60s, cutting steps and using 10-point crampons. We talked for awhile and, among other things, he explained how to use one’s piton hammer to make a Dulfersitz rappel less painful. Old school!

Seeing the clouds approaching, I bid the couple farewell and took off again down the trail, getting rained on intermittently on the long descent. These Colorado-style afternoon thunderstorms are sure frustrating. 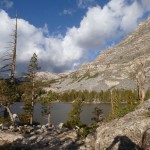 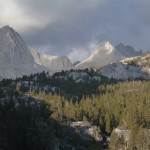 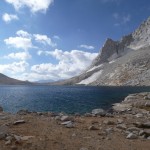 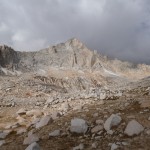 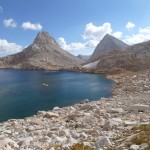 Back to approach from Royce Lake 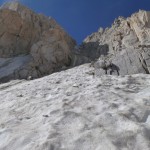 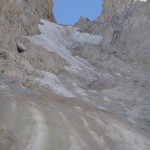 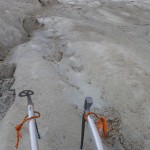 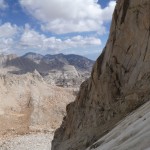 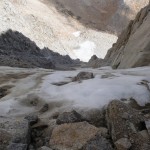 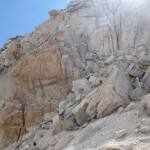