In many ways, Lone Pine Peak looks lame: it is more the end of a ridge than an actual peak; its summit is the highpoint of a broad, sandy plateau; and its easiest route is a disgusting class 2 scree chute. However, it has some redeeming features: sitting east of the crest, it looks good from Lone Pine; its south face has many long, hard trad routes; and, most interesting to Yours Truly, it has two long, moderate ridges extending to the north and northeast. I did the north ridge from Meysan Lakes last year, a short climb with a somewhat intimidating crux.

This year I came back for the northeast ridge, a 5.6 route rising 6,200′ from the valley floor. While most of the route was far easier than 5.6, I was glad to have my rock shoes, which made the slabs and small knobs go much quicker. The rock was somewhat crumbly in places, but not bad enough to be dangerous. I stayed fairly close to the ridge crest, but did not follow it religiously when there were obvious ramps to one side or the other. Though it was long, none of the climbing felt as hard as the crux on the north ridge. My car-to-summit time was about 5h25, of which a bit under 3 hours was spent on the rock-shoes part of the ridge.

I left my camp on the dirt road past Lone Pine Campground around 6:10, when there was enough light to pick a smart route up the initial sand and brush. Following a network of game trails minimized back-sliding and bush-whacking; the climb out of the desert was far less painful than I had feared. I eventually gained the ridge, and fought some trees and rock outcroppings until it narrowed and the climbing started.

While the climbing was probably only 4th class, I put on my rock shoes at the base of the first tower to make the my life easier. Much of the climbing is on slabs with small crystals, which are much easier in rock slippers than worn-out running shoes. Whatever the footwear, it is worth climbing somewhat carefully, since some of the crystals will break off.

This part of the ridge seems endless, and even if I could describe the route I took, it probably wouldn’t help. I freely took ramps below the ridge, usually on the right, when I could use them to avoid slow, blocky sections on the crest. However, the crest is often an efficient path, either via slab sidewalks or hand-traverses, and I found some of the trickiest climbing when regaining the crest after deviating to one side or the other. The best approach is probably to stay close to the crest, while avoiding most difficulties to the right, where the rock is usually less crumbly.

The ridge ends at a gap just short of the headwall. After cleaning up an old rap station and examining some bad downclimbing options to the northwest, I retreated a few yards and found an easy 3rd class downclimb on the southeast side. I changed back into running shoes in the gap, then followed the obvious ramp right to a 3rd class gully leading to the summit plateau.

The standard descent is the East Ledges route into Tuttle Creek, but it can supposedly be hard to find, so I just took the standard chute down to the Meysan Lake trail, then took all the sand shortcuts to make the trail bearable. After a half-hour wait, I was able to hitch a ride back to the campground and walk the road to my car. Even without the ride, taking the Whitney National “Scenic” Trail from the Meysan Lake trailhead back to the campground seems like a reasonable way down. 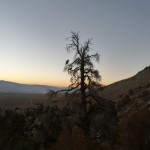 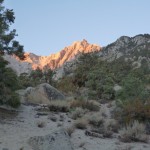 Ridge from the desert 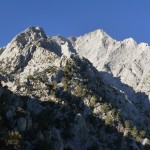 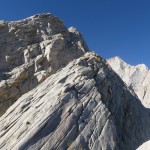 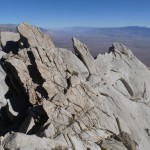 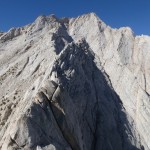 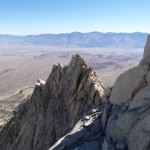 Back from upper ridge 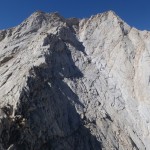 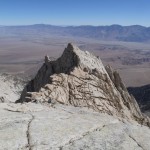 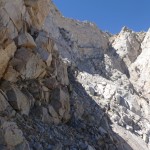 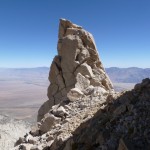 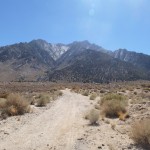 Ridges from the desert