I don’t rope up much, and camp out even less, but can muddle my way through both when necessary. I have wanted to check out the aretes on Temple Crag for awhile, but they’re a bit too hard for onsight solos. I met Jen at the Challenge, and she seemed fast and competent, and was interested in doing one of these routes, so I put on the big pack full of heavy stuff to climb Moon Goddess, the better of the two easier aretes. We did the route as six pitches with some soloing and simul-climbing at the start, and found a bit of 5.7, lots of easier terrain, and quite a few large loose blocks.

The approach sometimes requires an ice axe to cross a permanent snowfield to gain the ledge at the base of the arete, but I found a 4th class chimney left of the snow leading straight to the ledge. Jen, starting a trend for the day, found a more challenging route that involved scrabbling across snow and switching into rock shoes.

After regrouping, we turned the corner and started up a broad face from which several aretes gradually emerge. I headed right, toward the one we wanted to climb, and was rewarded with fun 4th class climbing on steep, narrow ledges and flakes. The rope, carried in a backpack coil, added some spice as it flopped around on my back and dug into my shoulders. Jen, finding my route too easy, followed a gradually-steepening chimney in the gully left of the arete until she got stuck. While I have done my share of failed exploratory climbing, it can be unnerving watching someone else do it. She backed off, I belayed her up to my ledge, and we simul-climbed to the base of the first tower.

I led P1, which started out interesting, then quickly devolved to class 3-4 down through a notch to the belay, with much rope drag. Jen led P2, up a lichen-y gully, then through a clean left-facing dihedral. The latter was probably the crux, with some tricky moves at the base protected by no fewer than 3 fixed cams.

I was up for P3, another pitch with a short, interesting start followed by lots of easier traversing. A bit lost on the right face of the arete, I belayed from an anchor before and below a notch and subsidiary arete near the end of our 50m rope. P4 followed the near side of the side-arete to the ridge over mostly class 4 and 5.easy terrain. P5 had a slightly tricky start, then traversed some blocks on the spine of the ridge to some long slings and a rap station. We actually rappeled, though it hurt me to do so just to avoid a whole 8 feet of 5.8 downclimbing. From a platform after the rappel, P6 led to the southeast talus slope.

We scrambled across to the use trail, stashed our gear, and tagged the summit before returning to camp via Contact Crack. Coming down from Temple Crag is a bit of a downer. One starts on the summit, looking down at the Dark Star arete and glacial lakes, and across at the Palisades. After a long talus descent to the lakes, the trail follows Big Pine Creek through pleasant woods, then abruptly enters the desert for a long, dusty descent to join the creek’s south fork. Finally, it becomes even dustier as it parallels the road for an eternity, past the pack stables, to reach the overnight lot.

I still don’t see the point of simul-climbing rather than soloing: a fall by either partner, especially the follower, is Bad News for both, and one has the added weight and hassle of dealing with gear and a rope. But I can find the patience to enjoy roped climbing more often, and there are worse places to spend one’s time than Nth lakes. This McDonald’s, with its unholy 50s muzak, comes to mind. 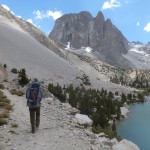 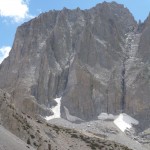 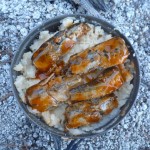 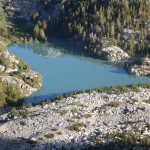 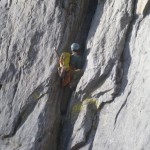 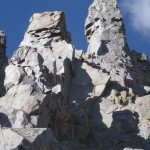 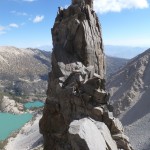 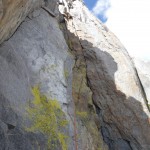 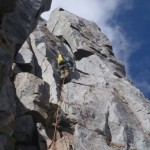 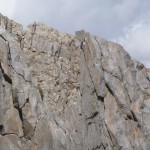 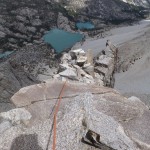 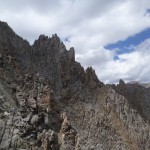 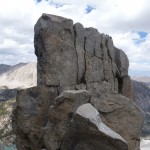 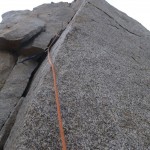 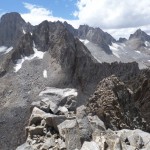 Gayley and Sill from summit