Every recent Sierra Challenge seems to have one day that sucks. Last year had the mosquito-infested sand-slog up Mount Alice; this year had the deservedly notorious bushwhack up George Creek. After the pain, we had several peak options, from Carl Heller to the south, to Williamson to the north; I chose Carl Heller, because its east ridge has been on my to-do list for several years. While it was indeed an interesting feature and a fun climb — sort of “Wolf’s Head for beginners” — it was not worth the approach.

The George Creek “trailhead” is actually a few pullouts near where a rough 4WD road turns into a trail, then all but disappears entirely. I drove there the night before via Foothill Road (the road to Shepherd Pass), and was reassured to find JD’s enormous Suburban at the end of the various roads. Others tried to come in on another road near Manzanar, which had recently washed out; Rick successfully used another approach starting south of Manzanar. Jen, making a surprise return, simply drove her compact as far as it would go on Foothill, then slept next to the road hoping for a ride.

The 5AM start gave us over an hour to enjoy George Creek’s tender caresses by headlamp. We almost immediately plunged into thickets of some kind of deciduous river-dwelling trees. There was an intermittent use trail, and also stream crossings on wet rocks. After the second time I slipped into the stream, I stopped to wring out my sock, while the rest of the group flailed on. I spent the next hour or so making up the five-minute gap to the others in my own personal hell: alone and off-route, thrashing through angle-of-repose sand, slide alder, and spiny shrubs.

I finally caught them at the fork where the route to Carl Heller splits off, and Jen, Tom and I turned left, while the others thrashed through more brush and sand to the right. The terrain almost immediately changed to open forest, talus, and slabs on the left side of the stream. We crossed to the right below a cleft, then went around the left side of the scenic unnamed lake north of the ridge, where Tom managed to twist his ankle on some easy slabs.

The route was obvious on the approach, and looked intimidating: a long ridge extending east into the cirque, with a steep start and end, and a flatter middle section. After a long hike up slabs to reach it, I found the first steep section to be made of crumbly but manageable class 3 slabs. From there I stayed mostly on the ridge or just to the right (north) on class 2-3 terrain; notable sections included a narrow ledge traversing around a large block to the left, and a v-shaped trough inelegantly climbed in a frog-walk. The crux was probably a climb up the right side of the ridge past a fixed pin near where it steepens again toward the top.

Carl Heller has two summits, the lefthand one being higher; we finished by climbing up a chute full of loose rock between them, then around the west side and up some blocks. Jen was briefly stymied by the blocks, but found her way to the summit as I dug into my fish; Tom arrived a few minutes later, slowed by his ankle. Stormclouds covered Mount Whitney’s summit to the south, but we saw no lightning.

Tom thought descending the ridge would be easier on his ankle than going down and back over Vacation Pass, so we retraced our steps. It rained a bit on the descent, making the rock on the ridge less trustworthy, but the weather mostly held. I led the way down to the George Creek junction, then let Jen take over, figuring I would just get us lost. Rick, a George Creek regular, caught us partway down, and daylight and experience made the route much easier, if still not pleasant.

Bottom line: There is no reason to use George Creek, no peak worth the pain. It is far more pleasant to take scenic Cleaver Col over to Wallace Creek from Whitney Portal when climbing Carl Heller, Barnard, or Trojan. 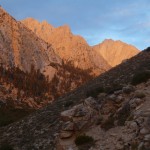 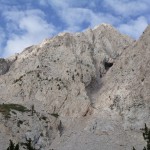 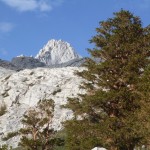 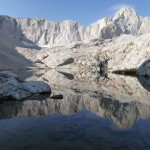 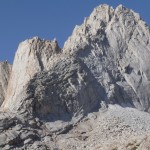 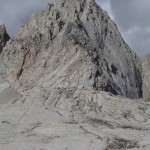 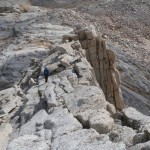 Sidewalks on the flat section 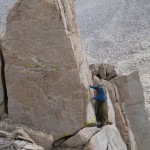 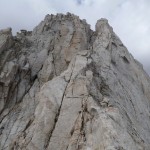 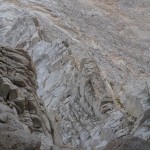 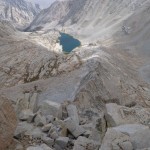 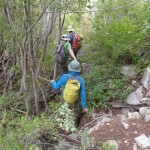 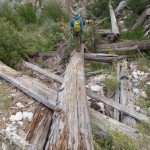 Brief respite from the pain