Thompson Ridge is connected to Mount Thompson by a jagged ridge, and extends north from “Ski Mountaineer’s Peak” to a broad plateau with three other minor summits. Each summit counted as half a Sierra Challenge peak. There was a sizable crowd for the start, though many were climbing alternate peaks in the area.

Remembering my trip to Thompson last year, I left the Treasure Lakes Trail at the “no fires” sign, while others followed a GPS track (or each other) farther up the trail. After the remembered steep climb between slabs through pine needles, I emerged near the base of the valley leading to the Gilbert-Thompson talus bowl, and followed its left-hand side over slabs and talus. Looking down to my left for the others, I was surprised to see Jen, who quickly caught up and accompanied me for the rest of the day.

If you pick a good line, Thompson’s talus-bowl is not that bad, and we were soon climbing the sand and boulders to “Ski Mountaineer’s Peak.” From the summit, the ridge south to Thompson looked hard, as did the one north to the other half of the day’s challenge peak. We considered our options, then headed down a sandy chute to the right of the northward ridge. While most of the chute cliffed out, I found a narrow, steep, loose gully on the left with ice in the bottom. I carefully stemmed my way down past the ice, then hid behind a rock as Jen cleaned out some of the loose rocks I had left behind.

From here, we traversed to the ridge, then enjoyed some fun class 3 climbing to the plain with the remaining summits. The first, evidently the high point, was easy, while the next one north had a tricky summit block. The obvious way to climb it is a hand crack on the west side with bad feet, but I was not confident enough to solo that in running shoes. Fortunately, I had brought my rock shoes for exactly this reason, and reached the summit after a couple of desperate moves. Jen, in her worn-out tennis shoes (i.e. shoes that will not mark up your tennis court), was not up for it; nor was Phil, who showed up a few minutes later in hiking boots. However, Bob and several others managed to climb it without rock shoes, so maybe I was just being a wuss.

From there, it was a short hike to the 4th class block on the northwest side of the plain, suitable for all footwear. Rather than searching for the “summit” of Table Mountain, we then dropped down some sand to a nice lake, then followed a watercourse through the woods to the west side of South Lake. The water being incredibly low, I thought it might be faster to go around the west side rather than rejoining the Treasure Lakes trail. While it turned out to be a slow talus hop rather than a fast beach hike, it was sort of fun to meet fishermen on the rarely-hiked side of the lake. 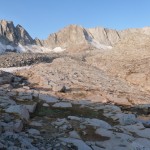 Gilbert (l) and Thompson (r) from the approach 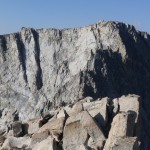 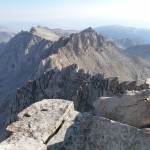 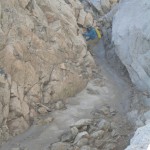 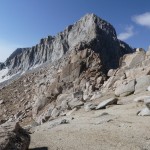 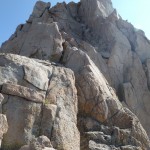 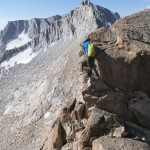 Dynamic move on the ridge 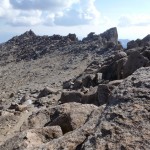 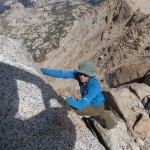 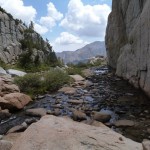 Stream down to South Lake 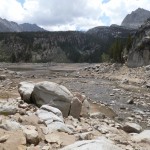 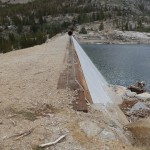 About to cross the dam