“Barrett” is the unofficial name of the nearly-14,000-foot peak southwest of Polemonium. It is fairly difficult to reach, with possible approaches including Bishop and Thunderbolt Passes from South Lake, and Scimitar Pass from Glacier Lodge. Bob thought that the South Lake approach would be least painful, and it crosses the scenic and pleasant Barrett Lakes region south of the Palisades.

A somewhat reduced group started off from South Lake at 5 AM for the long hike in. I pulled ahead to guide people onto the old, shorter trail, and at least Jen and Tom took the hint. Andrew, and later Jonathan, caught up before reaching the pass in about 1h45. Having just recently visited Thunderbolt Pass, I took the lead again to encourage people toward the higher route that avoids most of the painful giant talus.

After a break there, we dropped part-way to the large Barrett Lake, then tried to contour high toward Potluck Pass. This proved to be unpleasant, with nice slabs ending abruptly in short, overhanging cliffs, and a couple of talus crossings. I remembered from a few years ago that the lower crossing by the lake was a pleasant mix of slab and grass, and resolved to lose the extra elevation on the way back.

At Potluck Pass, Jonathan split off to take the class 2 route over the pass and up the valley southwest of Split, while the rest of us started up the ridge to the bonus Peak 12,698. This proved to be a fun but complicated class 3-4 scramble, with many large blocks to be overcome. I finished up a loose chute to the west, while the others found some large steps to the east. The summit had an old register whose first entry mentioned finding an even older jar of rust and decomposed paper.

After playing around on the summit a bit, we all dropped down the loose chute to regain the slabs southwest of the pass. A patch of snow saved us some talus-hopping, though it cost Andrew a bit of skin when he made a slight tactical error. The forecast had me in the mood for speed, so I put on some music and mercilessly left the others behind on the talus climb to Barrett’s summit ridge. Looking back from time to time, I could see Andrew and Tom making good progress, while Jen seemed to have bonked. 200+ cal/hr seems like a lot of food, but unless you have Bob Burd’s snake-like energy-storage ability, it’s what you need to keep going fast.

I met Bob and Michael just below the ridge on their way down, and they informed me that the right-hand side of the ridge was easiest. A bit of 3rd and 4th class climbing took me past Kevin to the summit, where I saw good weather above and badness toward Bishop Pass. After some time on the summit with Kevin and Jonathan, I opted not to tag Polemonium and drop down the U-notch, instead heading straight back to meet my watery doom. The rain held until below Bishop Pass, but there were signs of a ferocious hail storm earlier in the afternoon. I ended up enduring about an hour of garbage-bag-clad wetness, leaving Jen, Avery, and Bob to their fates as I made my way down the trail/river as quickly as I could. After dodging the weather for the first four days, I suppose it was only fair. 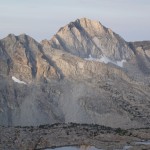 Giraud from near Bishop Pass 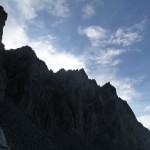 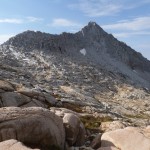 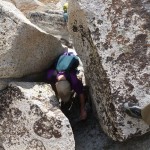 Tunneling up the ridge 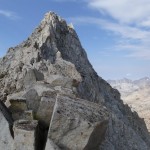 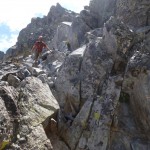 On the easy way down 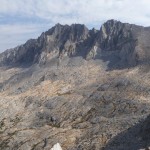 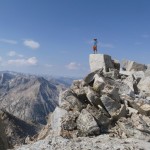 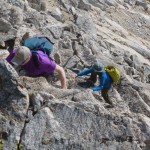 Topping out east of the ridge 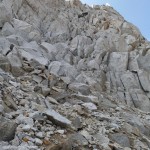 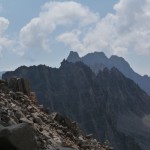 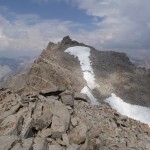 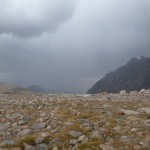 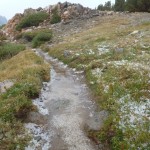 … but not as much as that did