A trip to the Minarets is rarely easy and often scary. In his quest to climb them all, Bob has been putting one minaret in many years’ challenges. Last year was Waller; this year was its neighbor to the south, Leonard. Tom and I, wanting to get more out of the multi-hour approach, also tagged the next two minarets to the south, Turner and Jensen. While we made our lives hard on the way up, we found an easier way down, determining that Jensen and Turner are class 4 from the east.

The Agnew dustbin approach was the same as usual, taking about 2 hours to Lake Ediza. From there, we headed toward the Gap before turning southwest toward the bowl at the base of Leonard’s southeast face. While much of the route to the Gap was on snow last year, this year it was almost dry. Though it looks cliffy, a series of grassy ramps and some easy talus lead quickly to Leonard’s base.

I started up some outward-sloping slabs at the high end of the bowl. While their angle was somewhat unnerving, one could follow cracks and edges to keep the climbing fairly easy. Near the top of the slabs, I exited to the left, crossing around a buttress, then traversed down and right across a system of ledges to the east-west ridge. From there, some scrambling led to the highpoint of… nothing. Finally looking behind me, I saw the obvious summit a few hundred yards to the west.

I retraced my steps to where I joined the ridge, then traversed left and up a short steep section. From there, I climbed along the crest to the summit, traversing onto the left face to avoid some difficulties, and found the summit register. As I enjoyed my edible aquatic life (smoked mussels), I watched the others make their way up the slabs, around the buttress, and up somewhat easier terrain to the ridge. Everyone eventually made it to the summit, though Michael was less than happy with the exposed hand traverse. As we sat on the summit, Bob noticed a stealthy climber approaching up the west ridge. This proved to be Kevin, slumming in the Sierra before moving on to more serious peaks.

Tom and I ended up ahead on the descent, crossing the snowfield to have a look at (read: climb) Turner’s east face. The route we chose tempted us with fun climbing on jugs as it gradually became steeper and more precarious. It was about at the limit of what I would downclimb in running shoes, so I would guess it was 5.4-5.5. We eventually moved left onto an arete and up to easier ground, both hoping there was an easier way down.

From there, we followed a sloping dihedral to the ridge, where a short scramble led to the summit. Perusing the register, we were encouraged to see that Bob Pickering mentioned a “class 3” ramp to the Turner-Jensen saddle. The climb from Turner to Jensen was hard class 4, with some tricky climbing to get past the short pinnacles in the saddle. We admired Dyer (the 5.6/5.8 crux of the traverse) from the summit, then retraced our steps to the saddle. A 3rd class downclimb trending north led to our ascent route below the difficulties, and some 4th class got us back to the snow and talus.

I led us on a suboptimal descent route to the outlet of Iceberg Lake, where we rejoined the main trail. We passed a wilted-looking Ron near Ediza, then caught Pat and Kevin below Shadow Lake, joining them for a pleasantly drizzly hike back to Agnew Meadows, arriving in 10h15. 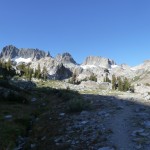 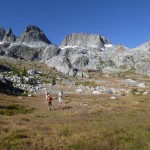 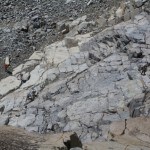 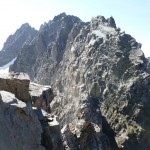 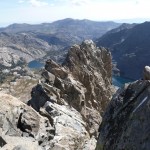 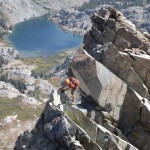 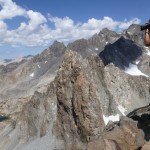 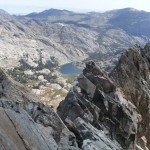 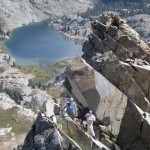 Roping up for a short stretch 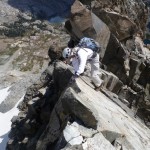 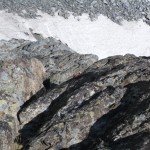 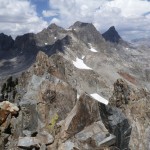 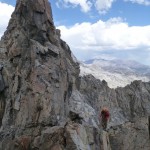 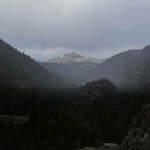 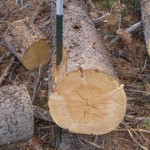 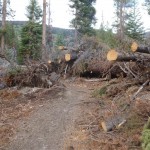 Downed timber on the trail