The high-point of a ridge southwest of Mt. Sneffels, Dallas Peak is known for having the hardest standard route of Colorado’s 100 highest peaks, a 5.3 summit pinnacle. It also happens to be an absolute miracle of balanced scree and talus, thousands of feet of mobile rock with just enough solid stuff to host a bit of mossy 5th-class climbing near the top.

It was yet another cloudy dawn start, this time from the Mill Creek trailhead just outside Telluride. The route follows the Deep Creek trail to the Sneffels Highline trail, then branches off cross-country for a pick-your-poison climb to Dallas’ east ridge. Both trails are moderately-graded and well-maintained, making for a pleasant cruise on the approach and a fun run on the return. There was some rain on the peaks south of Telluride and around Wilson, but the weather was holding in my part of the range.

From the south, Dallas itself is a mess of rounded, rotten, unclimbable cliffs and buttes mixed with steep scree chutes. The obvious weakness is a yellow talus fan leading to the east ridge. However, this talus is unusually unstable: stepping on one rock will often cause several feet of rock above it to slide, bashing your shin or ankle if you’re not careful. I made my way up the left side of the fan, staying near the edge of the gray cliffs where the rocks didn’t move quite so much. The weather continued to look iffy but stable.

I finally reached the ridge, and was amazed to see that parts of it were almost an overhanging wave of talus. From the saddle to the base of the summit knob, the route crosses a variety of talus and occasional steps of crumbly, 3rd class gray rock. One of the 3rd class pitches near the summit had a rappel station at the top; I almost removed it for being unnecessary junk, but kept if for the sake of people descending in the rain.

The summit knob is easiest on the north side, where the rock becomes more solid, though it is still covered in scree, lichen, and moss. I made my way up a 5.easy chimney to the left of what I later found was the standard route. Climbers’ passage has cleaned it off relative to the surrounding rock, but it is still chossy. The summit was, appropriately, a talus plateau.

I downclimbed the standard route, failing to booty a #2 friend (someone had an expensive climb…), but successfully recovering a #3 stopper. Rather than returning along the ridge, I followed some boot-tracks down into the maze of gullies. I eventually lost them, but a combination of game trails and likely-looking chutes got me down through the cliffs and back to the trail. I decided to run the trail back, and was rewarded for my choice by arriving at the car about 5 minutes before the “afternoon” rains started at 11:25. Ah, Colorado in July…

Telluride is somewhat more friendly than Vail: though it seems to consist mostly of overpriced boutiques, it has a decent coffee place and a public park with adequate parking. Ouray is, of course, much better. In particular, showers at the hot springs are $2 and reasonably clean. 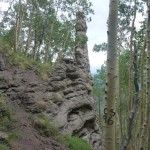 Rock thumb along the trail 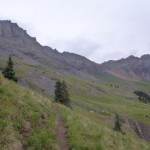 Dallas (l) and its east ridge from trail 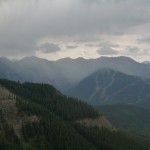 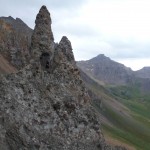 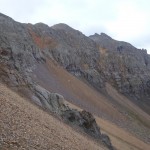 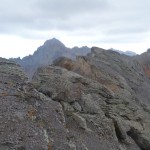 East ridge, with Sneffels behind 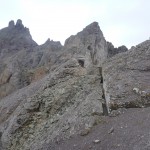 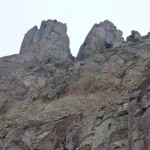 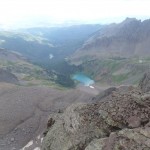 Lake to the northeast 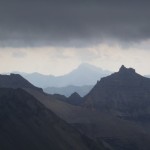 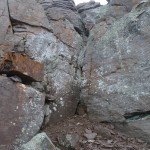 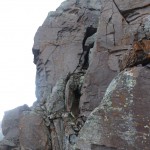 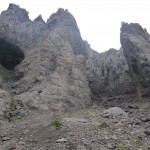