The Pinnacle Buttes are the cliffs that grab your attention driving over Togwotee (“TOW-guh-tee”) pass, a local highpoint in the southern Absarokas (“ab-SOR-kuhs”). As they are made of breccia (basically rubble held together by prehistoric mud), no self-respecting climber would deign to climb them. However, a self-abusing peak-bagger like Yours Truly will, after driving past them several times, set aside a morning to make the climb. Plus, there’s free camping at the trailhead.

I followed the Pinnacles trail to where it crosses a faint old road near a high-point, then followed a mixture of road cuts and animal trails to the northeast, looking for the break in Pinnacle Butte’s southeast ridge. The elk and/or goats led me past some vertical sections to the right, where I was able to reach the ridge via some horrible side-hilling across ball-bearing talus. From there, I followed another goat-trail for awhile, then made my way up solid breccia and lousy talus to the summit tundra, passing some cool and bizarre rock formations.

After tooling around the summit plateau a bit, I returned to the car wide awake for the long drive south. So long for this year, Wyoming. I’m not done with you yet. 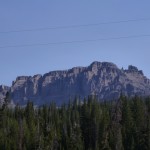 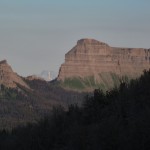 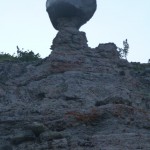 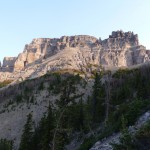 Route from near ridge 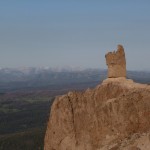 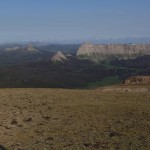 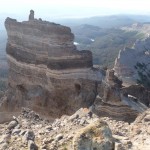 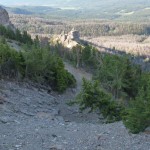 Aim for that knob on the way up/down