Or, more precisely: up to the col east of Gilkey’s Tower, up Gilkey’s, up the Ice Cream Cone, and around and up the South Teton; then back around the Cone and over Gilkey’s to the col, across Spalding and Cloudveil Dome to Nez Perce, and down the West Hourglass. It sounds like a long day, but most of the peaks are small once you reach the ridge.

I got a slightly pre-dawn start at 4:50 AM, more to beat the heat than because I expected to need daylight. Grinding up Burnt Wagon Gulch, I ran into a black bear for the second time this year. Far off in the gloaming he looked like an old snag, and even once I used my camera’s zoom to establish that he was a bear, he seemed non-threatening. He finally moved, taking a few steps toward me, and I experienced a brief moment of panic before realizing that he was just hiding behind a tree a few yards in my direction.

Stopping at the Lupine Meadows trail junction, I was immediately saddened to realize that mosquito season has begun here. After the usual grind, I turned left at the Meadows and kicked steps up the south fork of Garnet Canyon — even at 6:30, the snow was soft enough, and noticeably melted out in the past two days. The lower glissade from the Lower Saddle is still in, but very thin, and the summer trail is mostly exposed.

The standard route up the South Teton heads up the long valley to the saddle with the Middle, then heads up the northwest talus slope to near the summit. Bored with trudging up the valley, I noticed some skiers headed up a snowfield to an unknown point on the ridge. Since the rock to their right looked like more fun than talus, I cruised up in their direction to see where I landed.

I reached the top just as they dropped in for their few minutes of fun, and found myself just east of some pinnacle. I made my way to the summit on dry, moderate rock, and found myself on Gilkey’s Tower, with the Ice Cream Cone between me and the South Teton. This part of the ridge had the best climbing, with the most reasonable route staying close to the crest.

I climbed the Ice Cream Cone’s easier east side and, glancing over the west, saw that the guidebook wasn’t kidding about its being much more difficult. I retraced my steps, then found a narrow catwalk around the north side to the saddle with the South Teton. Snow and mud made things a bit more complicated but the climb to the summit was mostly 3rd class with a bit of 4th. I had been annoyed by the prospect of retracing my steps to do the traverse but, looking at the standard route, I saw that my way had been much more fun.

The return to where I reached the ridge went easily, except when I tried to bypass Gilkey’s Tower and realized that it is quite steep on both sides. I passed over a couple of other bumps on the ridge, one of which was probably Spalding Peak, before climbing Cloudveil’s short and easy west side.

The crux of the traverse for me was probably a slabby downclimb to the notch west of Cloudveil. The descent off Cloudveil’s east side was supposed to be 4th class and tricky, but it was mostly class 2-3 with patient route-finding, with a few 4th class steps mixed in. Rather than continuing along the ridge, I traversed across a series of ledges to intersect the standard route on Nez Perce.

Unlike last year, I had clear weather and snow-free rock, and it was easy to follow the cairns, bits of trail, and obvious line to the summit. I took some time to enjoy the view, watching four falcons circle overhead calling to each other. The summit has an informative view of both the Grand Teton and the long valley between the Middle and South Tetons. I managed to botch the descent again, but the downclimb next to the rappel was much easier when dry. After descending the West Hourglass on a mixture of scree, hard-pack, and slush, I jogged the trail back to the ranch to minimize boredom, arriving shortly after lunch. 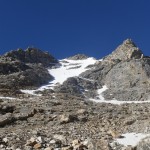 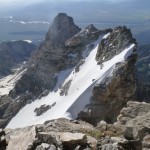 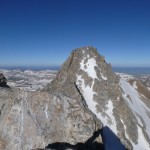 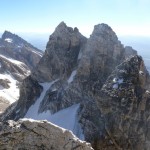 East from near the South Teton 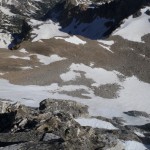 Standard route on the South 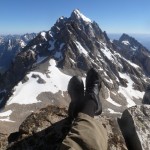 North from the South 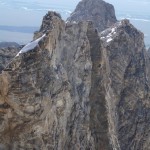 South side of ridge from South Teton 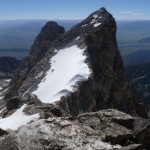 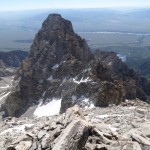 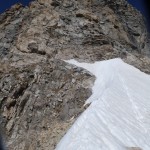 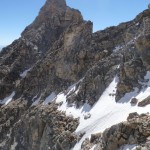 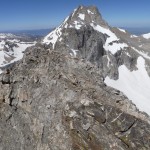 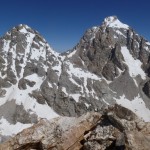 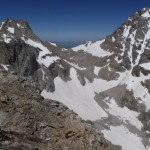