I had bigger plans for today, but a late start (from too much social interaction at the ranch), cloudy morning, and lack of energy reduced me to a re-run of something I did two years ago. Still, Koven is a great moderate route, and conditions were different enough this year to keep it fresh.

I got a “late” 6 AM start from Lupine Meadows, having driven there in case I returned via a traverse over Teewinot. Though I was not paying much attention to the too-familiar trail, I was at least aware enough to spot a marten to one side of the trail. After spotting me, it climbed out of reach up a tree, then watched curiously while I took pictures. A few minutes later, a male grouse made a much more obvious appearance in the middle of the trail. Sometimes it’s nice to start while the sun is up.

There is still a fair amount of snow on the trail to Amphitheater and Surprise Lakes, but the tourist hordes had created a good boot-pack. The climbers’ trail down to the glacier, however, was less clear, and I wasted some time in the steep woods before finding it. I saw old tracks from a few skiers and at least one person doing the Koven route, but no recent traffic.

Unlike last time, the lower half of the couloir was not dry. Instead, it was filled with a variety of ice, from white aerated stuff, to clear “cauliflower” or “bunch-of-grapes,” to a thin veneer over the rock on the left. This variable, low-angle ice climb was far more enjoyable than the dry rock to the left, though the icicles overhead were a bit treacherous on the descent.

The top half of the couloir was all hard snow, with progress limited only by my fatigue. As I climbed, the cloud layer dropped to obscure most of the higher peaks. While it had been cold overnight, the east- and southeast-facing snow was already getting soft, so climbing from the top of the couloir to the base of the summit knob was the usual slog. The final climb to the summit was much the same as before: chimney off the snow, make a slabby traverse to the left, walk along the northwest side of the summit, then double back to the chimney. I even bashed my head against the chockstone, which I believe I did last time as well.

I hung out for awhile, trying to get a decent shot of the Grand, then retreated to the top of the couloir. My enthusiasm for the traverse over Teewinot lasted past the summit of the West Prong, to the point where I saw the rest of the traverse. None of it looked especially difficult, but it looked long, and I would have to switch in and out of crampons several times before slogging up a talus slope. Lacking the energy for that much ridge, I downclimbed the Koven (dodging icicles) and returned via the trail.

Semi-encouragingly, I took almost the same amount of time as two years ago, when I was in 50-miler racing shape. Maybe I’ll be in good enough shape by August. 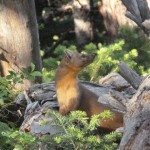 Marten on the ground 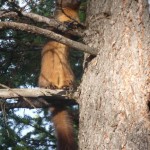 Marten in a tree 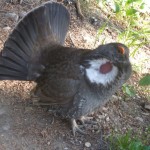 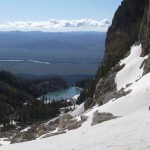 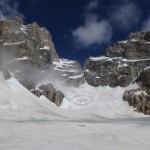 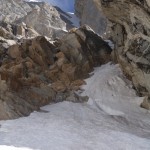 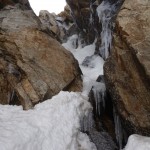 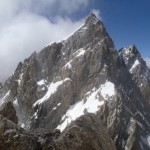 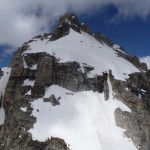 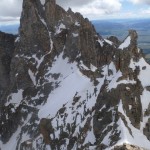