As the most remote and probably least-climbed 12,000-foot peak in the Tetons, Thor caught my attention as a worthy climb outside Garnet Canyon. Bill, who knows more Teton climbing history than I probably ever will, mentioned that Paul Petzoldt had climbed Thor and Moran as a traverse in 1935. I was immediately interested, not least because this would let me descend the Skillet Glacier rather than retracing my steps down Leigh Canyon and around Leigh Lake, a notorious bushwhack.

I woke to my alarm at 3:30, and was on the trail from String Lake by 4:05, talking to myself from time to time to let the bears know where I was. This was probably unnecessary, since the campsites along String and Leigh Lakes were all occupied.

It was light enough to hike without a headlamp by the time I reached the 4-way junction between Leigh and Bearpaw Lakes. I explored the left and center trails before deciding that the left one was the remnant of the old NPS trail around the lake. While it is obliterated by deadfall almost immediately after reaching the lake, I found remnants of the trail until just after it reaches a dry stream-bed.

As the lake-shore turns west, the trail seems to disappear entirely. I mostly bushwhacked, sometimes through stinging nettles, but was able to follow sporadic game (i.e. bear) trails. On the positive side, my cursing and muttering about the bushwhack probably alerted the bears. I eventually reached the approach to the CMC route on Moran and, after about 3 hours on the “trail,” truly entered Leigh Canyon.

Having followed the CMC approach up the north slope, I entered the canyon high, which proved fortunate. After dropping down to avoid some slabs, I found a line of cairns in a field of large, stable talus, which I followed to the base of Moran’s south buttress. From there, the approach to Thor’s southeast ridge climbs a long, relatively pleasant talus slope to the terminal moraine of the glacier below Thor’s east face.

Ortenburger’s guidebook mentions a pitch of rotten rock leading from the moraine to a 150-foot chimney. Instead, I found a steepish snow-slope leading to the edge of a broad, slabby 4th-class gully with a corner on one side. There might have been a short 5th-class step partway up, but it felt easier than 5.4. The ledge from the gully to the summit ridge was covered in steep snow with a bad runout, so after traversing the first part, I followed an easy 5th-class crack directly to the ridge, and traversed the dry side to the col. From there to the summit, the climbing was class 2-3 with occasional snow.

The traverse to Moran looks incredibly complicated, but I had little trouble with route-finding, even though Ortenburger’s notes are vague (e.g. “… following a ledge (apparently) on the left (northwest) side 50 to 100 feet below the crest until it seems wise to cut back up onto the crest.”) or out-of-touch. It is long, though, taking me about 1h45, and involves much loose rock and exposure.

In detail… descend on or near the crest to where the ridge flattens, then look for a ledge on the left. Follow this until the ridge broadens and you see a 3rd class ramp to a cleft. Stay on the ridge through an easy but airy knife-edge section, then climb black rock to the summit of “Peak 12,000+”. Cross the broad plateau, then descend right through terrible loose rock to the notch. Ortenburger suggests climbing the black rock, probably from farther down the notch, but I found it easier and more stable to traverse left, then regain the ridge via a gully. This section is steep with much loose rock, but the solid pieces have huge positive edges, so the climbing is easy. From the top of the black rock, it is a short walk to the notch before Moran’s summit, and an easy climb up to the plateau.

Unlike last time, conditions were perfect on top, and I was able to enjoy my fish on the summit. The Skillet Glacier was wet slush all the way down, and the bergschrund was starting to open, but I dropped from the top to the end of the snow (close to 5,000 feet) in exactly 30 minutes with a mixture of plunge-steps and boot-skiing. The bushwhack between the glacier and the lake is a major barrier to more people using this route, but after Leigh Lake and Canyon, it was nothing. I picked up the trail without much trouble, and jogged back to the car for an 11h30 day — not bad. 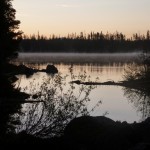 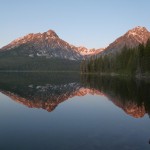 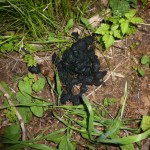 Bear scat on my trail 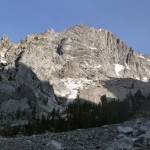 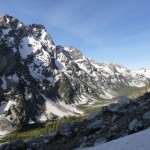 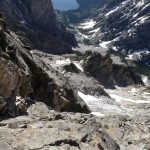 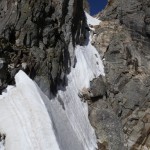 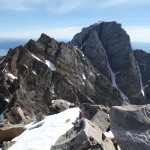 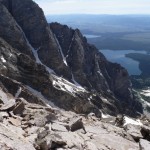 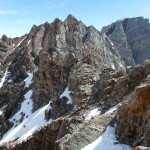 Below descent from Thor 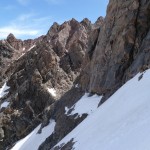 Ledge, with exit to ridge 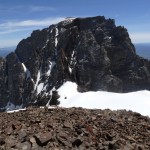 Moran from before steep black rock 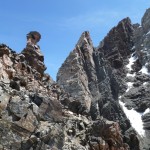 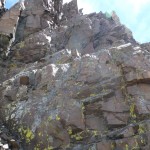 Steep and loose, but not hard 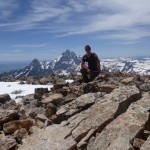 On top of Moran 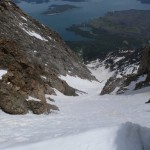 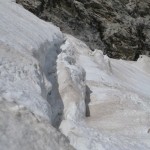 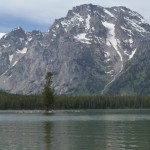