Low snow is not early summer

While there may not be much snow in the Tetons this year, that doesn’t mean that this isn’t the early season. Despite heavy snow last year, I had incredible luck with the weather; so far this year, not so much. After being faked out by some early morning rain and an overly-pessimistic weather forecast yesterday, Keith and I decided to get up high despite forecasts of snow, aiming for the Petzoldt Ridge on the Grand. Normally a moderate route (5.6 with a bit of 5.7), it seemed like it would be challenging but doable in adverse conditions.

We got a proper alpine start, with light snow falling at Lupine Meadows, and conditions were pleasant up to the Meadows, where we met two other work week volunteers camped out near one of the large boulders. The old snow was well consolidated and crusty, with only a thin layer of fresh powder on top. The climb out of the meadows, on the winter route, was a straightforward boot-pack, and while the new snow had been scoured off the flat moraine above, we were mostly sheltered from the wind.

Things got harder on the climb to the saddle, with stronger winds, colder temperatures, and drifts of fresh snow. I had heard that there was about 6 inches the day before, and that snow had been rearranged into drifts perhaps a foot deep. The combination of wallowing and back-sliding on the underlying steep snow slowed us down, but we still reached the saddle about 3h30 from the trailhead, a reasonable time.

Only the Exum shelter was up (and locked), so we sheltered next to it as best we could from the usual Lower Saddle winds to put on more gear and have a snack. In goggles and a down jacket over a shell (both with their hoods up), I was fairly comfortable except for slightly cold hands, but we couldn’t see much through the spindrift, and Keith’s pizza froze awfully fast when he set it down on a rock.

Hoping the wind might lessen away from the saddle, we headed up toward the Black Dike. However, the wind only seemed to get worse, and I wasn’t relishing the thought of belaying on a ridge in these conditions. While I think Keith felt at home, I was not eager to fight it out, so we headed back, quickly glissading back to the meadows, where the others had emerged from their tent and chosen a moderate climb more suitable to the adverse conditions. 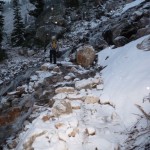 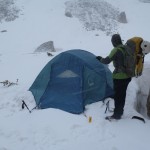 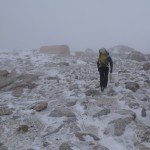 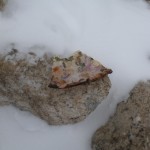 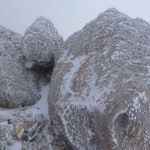 Rime on boulders near saddle 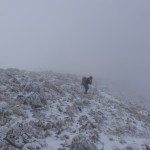 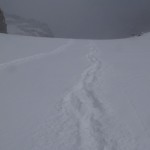 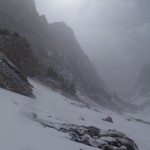 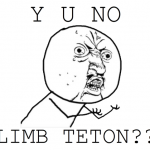