Today was another short, cold, windy day, but at least there was no smoke. Rather than coming back for the rest of the peaks around Hermit Creek, I did a nice loop out of the Comanche-Venable trailhead, tagging Comanche, Spring, and Venable peaks. Once again, I was impressed by the thorough network of well-maintained and generally well-signed trails on both sides of the range. This would be a great area for trail running.

I started out up the Comanche trail. There was a bit of snow in the trees partway up, but because the trail stays on south-facing slopes higher up, it was almost snow-free to the ridge. There, I was greeted by fierce, eyeball-freezing wind from the west. I made my way south to tag Comanche, then hid on its east face to thaw the right side of my face. This face, like the northeast face of Spring, holds a lot of snow, and looks like it might have some good moderate snow or ice lines around this time of year.

Returning to the saddle, I was too chilled and miserable to go on, even wearing all my layers, so I found a sheltered sunny spot to wait for the day to warm up. It never got truly warm, but it was at least bearable, and I had a tailwind rather than a frozen left eyeball as I left the trail to tag Spring and Venable. I dropped down Venable’s northeast ridge, catching my trail again above its intersection with the Venable Pass trail. Had I followed the trail, I would have cut improbably across Venable’s steep east face on a ledge.

From the junction, it was mostly a trail run back to the parking lot. I saw other hikers for a change, and stopped briefly to check out Venable Falls, but mostly just made a beeline for the tuna. 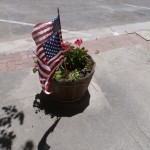 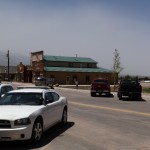 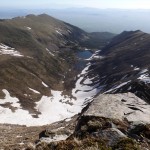 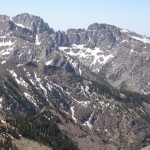 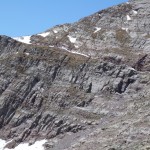 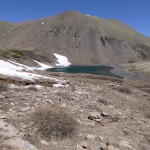 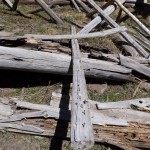 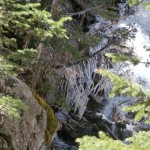