The difference between Mineral King and most east-side trailheads reminds me of that between their nearest city populations, the Bay Area and Los Angeles, respectively. Where east-side access roads are impressive feats of engineering, the Mineral King road is a feat of historical engineering. It goes from perhaps 1000 feet to 7800 feet via 25 miles of terrifying one-lane blind corners, hardly something anyone would think of building today. Driving to Mineral King requires an hour of white-knuckled terror and constant attention, as everyone drives 25-30 MPH in both directions, stomping on the brakes and swerving to the edge when there is oncoming traffic. Driving there is the most dangerous thing you’ll do at Mineral King.

Trailhead facilities feel like the “locals” (i.e. rich families with summer homes) tolerate and accept backpackers, rather than that someone has built huge parking lots for tourists. The trailhead parking is a primitive, too-small, overcrowded dirt lot. There are a payphone and an outhouse, but not much more.

The trailhead climate looks like northern New Mexico or southern Colorado, with aspens and pine trees, interspersed with open areas of sagebrush and scrub. Of course, the pines are huge sequoias rather than ponderosas, firs, and spruces. Unlike the east side, Mineral King features wildlife, with fearless (though not entirely creepy) deer wandering the parking lot. You get used to seeing curious eyes in your headlamp.

So it’s a nice place, if a total misnomer; it should be named Animal and Vegetable King, at least when compared to the east side. Though there were not enough minerals to keep the mines open for long, the place is teeming with plants of all sizes, deer, and at least some bears, though I only saw their scat on the trails. 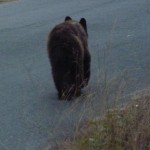 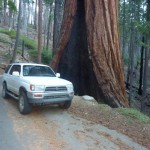 One response to “Hello, Mineral King”