While not as long as my recent foray to the Great Western Divide, dayhiking Black Kaweah was still exhausting. The former’s approach is all on a well-maintained trail, easy to grind out mindlessly by headlamp. The latter’s, however, involves significant cross-country travel by headlamp, requiring one’s full attention. Worse, crossing the Big Arroyo on the approach means climbing 3000 feet on the return, when one is tired and has no more peaks to generate enthusiasm.

I got a leisurely 3:50 AM start; while this increased the likelihood of evening headlamp time, it also meant that I was able to stow the headlamp at Spring Lake, climbing Hands-and-Knees Pass in the pre-dawn. While it is possible to follow bits of trail up Glacier Pass during the day, you will lose the trail at night. Even having passed this way the day before, I screwed up a bit, but since I understood where I had to go, I was able to reach the pass cross-country in about 1h40, the same time as by daylight, suffering no more than some loose talus-slogging.

As before, I had to make my way around the snowfield via the moat. I somehow had trouble picking up the trail on the other side, only finding it at the end of the first bench. On the far side of Spring Lake I sat down for a snack, and put away my headlamp. Hands-and-Knees was as easy as last time, though I nearly cliffed out trying to go straight down the west side of the Little Five Lakes valley. I eventually picked up the Black Rock Pass trail on the other side, and reached the trail junction at 7:15.

The rolling, then dropping, trail into the Big Arroyo was mostly runnable, and I was able to find dry stream crossings without wasting much time. I passed two backpackers while jumping the second piece of the stream, then hiked on to the cabin at the High Sierra Trail junction.

The 4000 foot climb to the summit began with a blind slog through the woods, with no landmarks to tell me whether I was heading up the right valley. I was fortunately more-or-less on-target, and as the trees thinned, I was greeted by Black Kaweah rising above the high plateau and the ridge separating Black and Red Kaweahs. It’s hard to describe with words and pictures just how intimidating it looks on this approach, with its many jagged fins and turrets.

I had come up on the south side of the valley, and continued a rising traverse on the slabs there, avoiding the nasty moraine as long as possible. Along the way, I stopped for water at a rushing brook that somehow came out of a small, lake-less cirque. From this side, the two chutes Secor mentions are not clear, but I made my way up the first chute that I found, and soon found both plentiful ducks and recent boot-tracks. Having spent more time recently on peaks that see only a few ascents per year, I was surprised to find this much traffic.

I easily found the cut-over into the left chute, and made my way up class 2 and easy class 3 rock covered with all manner of loose rocks. Even climbing carefully, I manage to let loose two significant rockslides, which would probably have killed or seriously injured anyone climbing below me. Sometimes it’s safest climbing alone. Mistakenly heading too far to the left (the summit’s on the right), I found some even looser terrain, a chute filled with “4 wheel drive” talus that had me scrabbling with hands and feet to make upward progress. Eventually realizing my error, I traversed back to the correct chute, which steepened to more sustained and difficult class 3 near the summit. While there were a few patches of snow and ice, they were easily avoided.

I reached the summit 6h50 out, faster than I had expected. I had planned, time permitting, to continue down Black Kaweah’s east ridge (class 4) to tag Pyramidal and Koonst Pinnacles, then possibly continue on to Red Kaweah. Time clearly did permit, but my enthusiasm waned as I viewed the route. The east ridge looked class 4, but probably over an hour of nerve-wracking climbing on sloping slabs covered with loose debris, possibly complicated by the snow hanging around on its north side. The pinnacles looked fun, but Red Kaweah looked like a long slog. I decided to make a short day of it, retracing my steps down the standard route.

I veered slightly north on the return, catching the HST farther north, then jogging to the Black Rock Pass junction. Here began one of the features of a Kaweah dayhike, its 3000 feet of climbing on the return. I still had energy to jog the flats below Little Five Lakes, but was noticeably slower on the climbs. The climb up the short, loose slope to Hands-and-Knees Pass was particularly unpleasant.

Climbing Glacier Pass, I was surprised to find quite a few fresh footprints in the dirt, and deep steps kicked in the snowfield below the pass. Topping out, I spied three hikers further down the pass. Mostly ignoring the trail, I caught them just above where the trail improves near the stream, and they recognized me from my stream acrobatics in the morning. When I introduced myself, the man recognized my name from the Sierra Challenge. I seem to have gained some notoriety among a select few. They were impressed by my speed in catching them; I was impressed that they had, with overnight packs, cleaned out the Kaweahs and several other peaks in that section of the Sierra.

Taking off again, I made it to the parking lot in 12h40, way faster than I had expected, for a surprisingly short day. I probably should have climbed more peaks, to get more mileage out of that heinous approach, but it felt good to be back before dark. I need to go back to the Kaweahs for a Red-to-Black traverse, and perhaps to climb Squaretop, but that will have to wait until at least next year. The days are getting short, and one can only climb Glacier Pass so many times in a week. 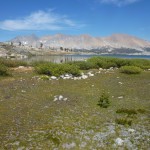 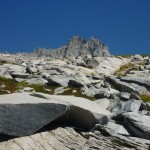 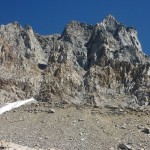 View across moraine to two chutes 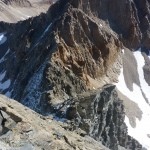 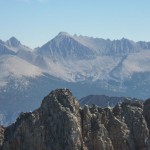 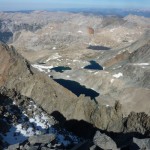 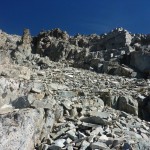 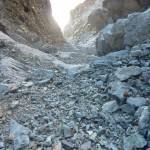 Just don’t knock anything down… 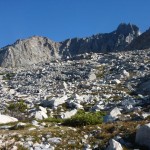 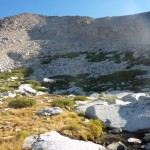 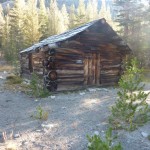 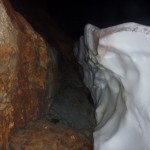