With yet more storms in the forecast, it was time to do another short peak, and Thompson fit the bill. Its long north face features a number of couloirs that can be good névé or ice climbs, including the Moynier, Harrington, and Smrz. My plan was to climb the Moynier and descend the Harrington, possibly traversing over to Powell from the summit plateau.

I found the right place to leave the trail this time — right at the “no fires” sign on the way to Treasure Lakes, and after a bit of thrashing in the woods, reached slabs and open country in the valley leading to the Gilbert-Thompson cirque. There was fresh snow on the ground, and plastered to the rocks above, but the couloirs looked grim: Gilbert’s north couloir had a big, exposed rock band in the middle, and Thompson’s Moynier looked like it might be mostly exposed rock.

The Harrington still had solid snow/ice, so I shivered in the overcast morning until the sun came out, then geared up to see what I would find. While there was a bit of fresh snow on the flats, 3-5″ had collected in the couloir, with more in some indentations. Underneath that lay various forms of not-ice. I could have climbed most of the couloir with crampons and ski poles; only near the top did I bother to sink the picks of my tools. This was fortunate, since doing so required also burying my hands in the fresh snow, and I did not have waterproof gloves.

The summit plateau had a consistent 1-2″ of new snow from the day before, but the storm had apparently been highly localized: other ridges to the south were snow-free, even on their north faces. I eventually found the pile of rocks that form the high point on the plateau, signed the register, and looked around at the gathering weather.

The traverse to Powell looked long and annoying, especially with the fresh snow on the rocks, so I retreated down the Harrington. Going down felt quite a bit harder than going up, and I ended up downclimbing much of the way facing in before I could plunge-step near the bottom.

I overshot the cut over to the Treasure Lakes trail on the way down — don’t go all the way to the stream! — and had to thrash my way upstream through some brush. It turned out that my laziness in not continuing to Powell paid off, as it started raining just as I reached the parking lot. 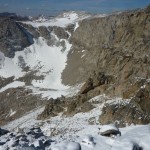 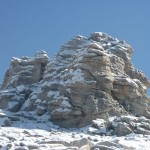 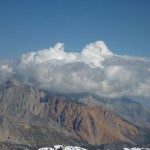 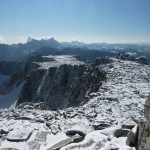 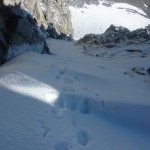 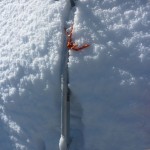 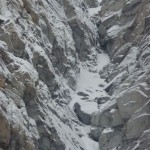 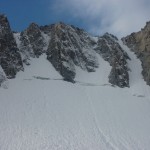 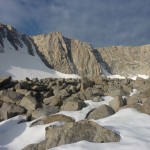 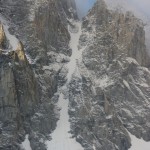 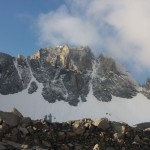