In my continuing quest to climb Sierra couloirs the non-Real-Man way (i.e. when they’re not completely filled with water ice), I raced the weather to climb the north couloir on Red Slate Mountain. Maybe I should give the peaks a fair chance by using hobnails and cutting steps, the way Real Men in the 1800s, when they believed crampons were “cheating.” Oh, well…

For once, I put in almost an hour of headlamp time making my way around Convict Lake and up the canyon. I couldn’t have done much more unless I wanted to take on the famously treacherous river crossing in the dark. While the Forest Service has taken the time to add a useless switchback and a “no wood fires” sign, their maintenance has not extended to repairing or replacing the bridge. Or even marking the trail beyond the “no wood fires” sign, which has almost completely disappeared.

Humorously, they also have not bothered to remove a note about Mildred Lake being 4.5 miles away on the trailhead sign for tourists (“remember to bring water!”). In fact, on my return, an older woman with a Slavic accent, a dog, and completely inappropriate (in multiple ways) clothing asked me how much farther it was to Mildred Lake. I pointed out that she had to cross that without a bridge, but was not sure why she wanted to go there. Now I know.

While the off-trail hiking was mostly easy, the approach took much longer than I had expected — nearly 4 hours — partly because I found myself on the wrong side of Constance Lake. Traversing around required putting my crampons early to cross some steep snow leading directly into the lake, then crunching painfully across a few strips of rocks with crampons on. Eventually, I managed to orient myself at the bottom of the couloir, facing up.

The snow was consistently hard, but not yet ice: thoroughly enjoyable, as long as you avoided the most annoying suncups and piles of rocks embedded in the snow. Like most mountains in this part of the crest, Red Slate is a big, decaying pile of rubble. I put in my angry music, took out my other tool, and got to work. The bergschrund had not yet opened, but there were several big steps to either mantle or avoid.

From below, it looked like I could reach the summit on solid snow if I continued to bear left. However, I saw no significant splits until I reached a notch in the white left-hand wall. From there, it looked like either class 3 rock or a crampon-dulling crunch across broken rock to another snow-patch that led a bit higher. Having already dulled my spikes enough, I opted for the rock, and maybe 500′ of climbing saw me on the summit. In retrospect, I think the snow, after turning the corner, led to the rest of the couloir.

I lounged around on the summit for awhile, nonchalantly watching the thunderstorms form to the south, but eventually thought better of it. The descent to the west would have been hell going up, but had large stretches of good scree-skiing. The suncups were still too hard for a glissade as I turned north, but it went quickly enough. Good thing, too — the clouds had finally decided to build in earnest.

I picked up bits of the trail, then lost it, but it wasn’t hard to drop straight down to the marsh/meadow above Mildred Lake. While it looked threatening enough to the north and south, I heard no thunder and felt only a few drops of rain, despite the dire forecast. The whole thing was a bit over 8 hours car-to-car. 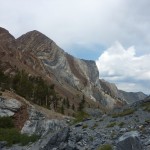 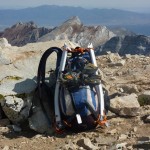 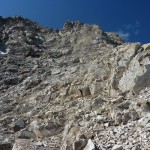 Rock from snow to summit 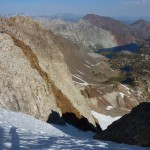 Down from top of couloir 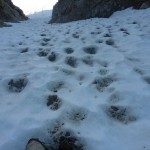 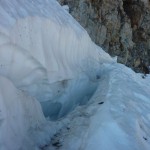 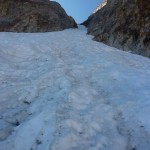 Up from the bottom 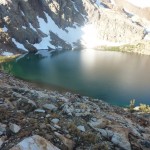 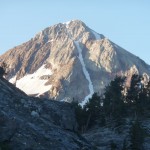 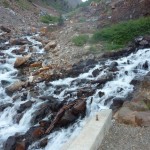