Continuing my minimal-hiking streak, I blew the dust off my snow gear to do the right north couloir on North Peak (named for Somebody North, a member of the first summit party). Later in the season, the couloir is a favorite moderate ice climb, with a short approach from high-altitude, free-camping-friendly Saddlebag Lake. This time of year, one can hope for névé or “styrofoam” snow. However, I woke up to partial cloud cover and insanely warm temperatures, and realized that I would probably find slush.

Not having paid much attention to the route description, I circled well north of the peak on the approach, avoiding some slabs that looked steep and impassable. The few patches of snow I crossed were soft enough to easily kick steps, hardly an encouraging sign. As I reached the base of the three north couloirs and donned crampons, I thought about trying the steeper left couloir. However, the ridge between there and the summit looked tricky, and I heard a roped party shouting back and forth from partway up. Not wanting to be bombed, I settled for the right couloir.

Right as I was negotiating the bergschrund, it began to rain. Expletives ensued. Fortunately, it soon stopped, and I made short work of the slush couloir, even finding a few patches of ice hard enough to swing a tool and get a real stick. Most of the time, though, I could just dagger my tools and kick my way up, barely needing crampons.

The roped party was coming around a buttress on the south side of the peak just as I topped out, and they asked if I knew the way to the summit. I thought the class 3 terrain to the west looked good; as it turns out, it also led to the summit. The other party took the next gully over, arriving a few minutes later to report similarly soft conditions in their couloir. In talking to them, I learned that the U-notch on North Palisade was in last week — half ice and half styrofoam, with a bergschrund that could be crossed with only a bit of gymnastics.

Dropping down the easy sand from the saddle between North and Conness, I saw a crowd of 10-15 people wandering across the snow between the Conness Lakes, but never got close enough to find out what they were doing. As always, the mosquitoes were out in force, but seemed to be satisfied biting the many stationary fishermen.

Since I was back to the car well before lunch, I had to think of something nearby to fill the afternoon. I had heard of the northwest buttress on Tenaya Peak as a long, moderate slab romp, which seemed perfect for the afternoon. After waiting in line at the entrance station, I drove down to Tenaya Lake and, amazingly, had no trouble parking.

After wandering toward the lake, I eventually found the climbers’ trail north of the peak, and followed it to the toe of the buttress. My running shoes were useless on the slabs, but after putting on rock shoes, it was almost too easy. Most of the “climb” is a hands-optional walk up a variety of slabs. If you don’t like the one you’re on, just move left or right. The climb steepens toward the top, where some moves required some thought. After passing a roped party with a detailed route description (14 pitches if you rope up!), I went left around the headwall, then back right and up some ledges to the summit ridge.

On the descent, I found a well-traveled use trail heading down the southwest ridge. However, it petered out at some too-steep slabs, so another unfortunate party and I ended up sagebrush-whacking down to the lake. The whole outing was about 2h30 car-to-car, with a nice long break on the summit — perfect for an afternoon. 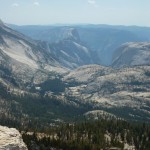 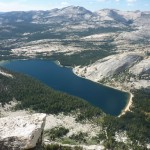 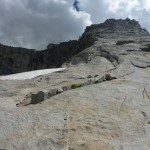 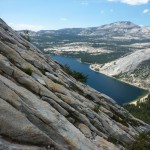 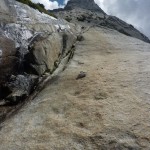 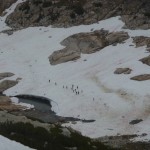 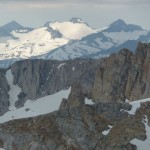 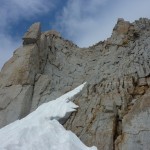 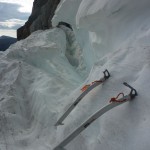 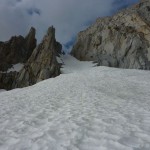 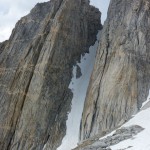 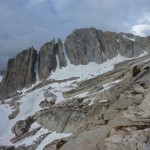 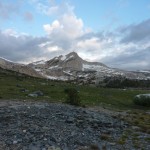 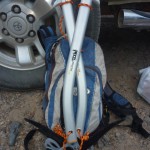