Birch, "Ed Lane," and the Thumb

Birch Creek trailhead, south of Big Pine, has to be the worst east-side trailhead: it sits at the end of an unmaintained dirt road, with no parking, no outhouse, and not even really a trail. What it does have is cows, cow pies, and cow paths. I slept near the trailhead almost by accident, while others with less clearance or more concern for their vehicles slept at pullouts farther down the road. At 6 AM, about a dozen of us convened near my car for a picture, then hiked another 50 yards to find a shiny new trailhead sign. Where most such signs have a topo map showing the trail and its surroundings, this one had a blank, white square. Joy.

As the truck tracks and cow paths diverged, our group split up into smaller search parties. My group followed a relatively nice-looking truck track that faded out at the northern edge of the Birch Creek ravine. From there, Bob started trail-hunting along the creek, while I headed straight up to the ridge to avoid side-hilling. The brush is thin enough in this incredibly dry stretch of the Sierra that bush-whacking is almost as fast as on-trail hiking. I eventually spotted another group on a prominent trail to the north, and shouted for Bob before angling in their direction.

Once we found the trail, it was easy to follow except when it passed through a seep, where it was overgrown by grass and split into multiple confused trails. Other than a patch of willows just below Birch Lake at 10,800′, this arid trail has absolutely no tree band for shade, and the water is poisoned by cows most of the way to the lake. After plowing through the “unidirectional willows” (you can only pass through them in one direction), we quickly arrived at beautiful Birch Lake, surrounded by rocks, rock-hard snowfields, and our peaks for the day.

Those who had brought crampons headed for the snow, while I, having none, resigned myself to the loose moraine. Much to my pleasure, however, once I reached a ridge south of the lake, I found a mixture of stable talus, slabs, and flat snow, and quickly made my way to the base of the saddle. The snow here was too steep to kick steps, but the rock to one side was no worse than class 3-4, and I soon faced the long sand and talus hill to the Thumb.

The contrast between the Thumb’s southeast and northwest sides is impressive: the former is a broad talus slope to the desert, while the latter is a precipitous drop into the south fork of Big Pine Creek, surrounded by the southern Palisades. As promised, Laura had left “treats” the summit, but since it was a bit early in the morning for such things, I took one with me to enjoy on Ed Lane.

After suffering across the sun-cups to the low point of the ridge connecting the two peaks, I found a nice surprise. Some ridges punish you with pinnacles and gaps for staying near the crest, while others reward you with exposed class 1 catwalks; this was one of the latter. I thoroughly enjoyed myself traversing the long ridge, enjoying the views of Upper Basin to the west and the Birch Lake valley to the east.

I had hoped to share my “treat” with those who had gone directly to Ed Lane, but I had both the summit and the “treat” to myself. It went well with fish, but I had to hang around the summit for a half hour for its effects to dissipate.

The ridge to the Birch saddle looked intimidating, with numerous broken towers. I dodged most of them to the west, then the east, and finally arrived at the sharp gap before the broad saddle. After briefly exploring a cool chimney in the point of the ridge, I retreated 20 yards and dropped into the gap on class 3 slabs to the west, then climbed out onto the plateau. Amazingly, I saw another hiker making his way toward me through the talus. It turned out to be Rick, coming the opposite direction from Birch. I told him how I got past the gap, and we each headed our own ways, though surprisingly none of the Challengers met him on Ed Lane.

While Birch is a nasty heap of brush, sand, and scree from most directions, it is a pleasant class 2 (or 3, if you prefer) scramble from the plateau. After a short break on top, I took off down the loose talus and sand of the southeast side, glad I had not come up this way. As the face flattened, I contoured over a few ridges to the north, then dropped through fields of lupine to the nasty desert plants below. Much northeastward bushwhacking later, I found myself one valley south of the trailhead. It was easy walking along the flat, however, and the reflection off my car windows guided me to the trailhead. The final stroll was spoiled only by a total foot-soaking crossing Birch Creek, when a large rock I stepped on proved livelier than it looked. 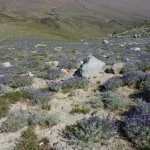 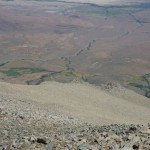 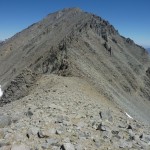 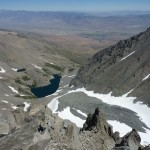 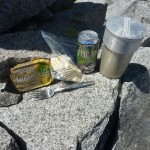 This is how we do it on the East Side. 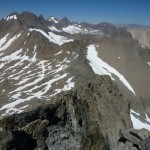 Palisades and Thumb from Ed Lane 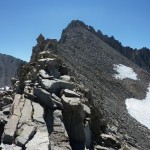 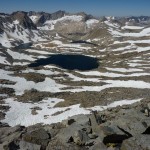 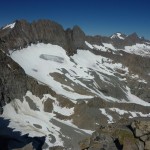 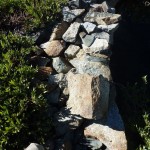 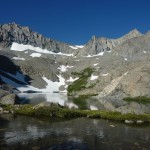 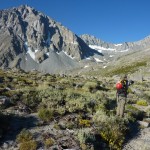 Birch, “Ed Lane,” and the Thumb 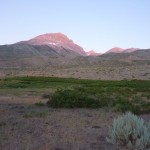 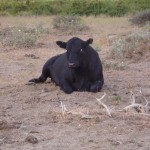