For the last day, the Challenge entered the Dread Whitney Zone. Thanks to Laura we were fully legit, with a permit and official poop bags for everyone. The day’s official peak was the Miter, a summit Bob had missed in the 2009 Challenge, when Adam, Matthew, and I were the only ones left standing on day 10. With permits, it is best reached via Arc Pass, a generally unpleasant climb from Consultation Lake. Since I had already climbed it, I planned to climb Marsh and McAdie, and possibly stop by the Miter on my way back.

As usual, we started off moving quickly as a group, and after an hour I found myself alone and ahead, without feeling like I had picked up the pace. Once on my own, I put in the headphones, turned up the pace, and motored by backpackers and Whitney day-hikers to the base of the long switchbacks to Trail Crest. From near Consultation Lake I spied a likely-looking ridge just right of the old Whitney Pass, which would cut off both the maddening horizontal switchbacks and a long, intricate traverse south of Trail Crest. The ridge turned out to be mostly slabs and stable talus, and I soon found myself at Whitney Pass, with a short and mostly class 2 ridge leading south to Marsh.

I reached the summit 3 hours from the trailhead. The register was so well-hidden that apparently no one has found it since 2004, but the standard cylinder contained some cool older scraps dating back to 1940. Looking south, the supposedly-very-class-5 ridge to McAdie looked as scary as expected. I almost went back north to drop down the west side of the ridge, but there was a tempting chimney and series of ledges that looked like it might lead to the notch. I couldn’t resist giving it a try.

After an initial downclimb on cracks to the left, I headed right on sandy, outward-sloping slabs, carefully lowering myself down steps and jamming hands and feet into cracks. As I made my way down, backtracking and trying increasingly difficult paths, I periodically looked over the south edge to the gap, finding only impassable-to-me cliffs. Traversing west, the gully dropped off almost as fast as my ledges descended, and I found myself contemplating a retreat over the summit. Finally, I found a narrow, upward-sloping ledge leading back left toward the ridge, and followed it to the bottom near the gap. Overcome by relief and self-satisfaction, I let out an uncharacteristic, joyous whoop.

Having read that McAdie is class 3 from Crabtree Pass, I traversed downward, then across ribs and miserably loose gullies to the south. Once again, I was surprised to see someone else in an obscure Sierra backwater, also apparently headed to McAdie. Coming closer, I recognized Laura, and shouted a greeting. Since she couldn’t hear me over the loud music on her headphones, I had to scare her at close quarters to get her attention. She saved me some time on the way up, pointing out that the north summit was the higher one (I was headed elsewhere), then cost me some on the way down, sending me on a fruitless route-finding mission up the middle summit. While the route is terribly loose from either Arc or Crabtree pass, the final 100 feet to the summit is interesting, traversing around the west side of the peak on an unlikely ledge.

The summit was unusually cold and windy, so we didn’t stay long before descending to Arc Pass, where I managed to scare James as he sheltered behind a boulder, studying his map. The wind was just as annoying here, and the Miter looked far away, so I took off down Arc Pass, sliding down a snowfield that was almost too steep to boot-ski. More hiking led to another short ski into Trail-side Meadow, where I rejoined the trail for a hike-run to Lone Pine Lake.

The last part of the Whitney Trail is a miserable series of sandy, sun-baked, nearly horizontal switchbacks. Fortunately, I know a couple of shortcuts. I startled some hikers by jogging straight off into the woods below Lone Pine Lake, where I picked up some slabs that deposited me many switchbacks down. After some more trail jogging, I picked up the old trail near Lone Pine Creek. The old trail is still partly maintained, and is both more direct and more shaded than the new one. It is yet another example of Sierra trails getting worse over time.

And that’s all. As always, Bob did a great job as the organizing force controlling so much potential chaos. It was another fun year, and I hope to see some of you out in the mountains. 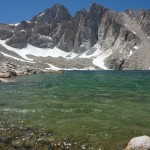 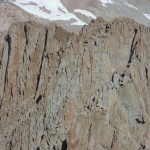 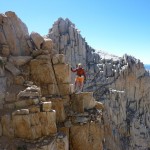 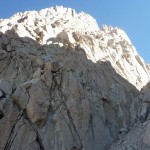 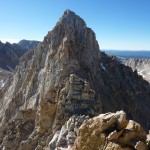 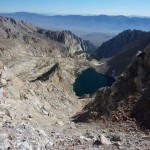 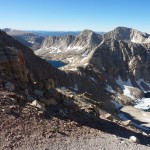