Some mountains just plain suck. Naturally, I try to avoid suck peaks, but I somehow found myself climbing two of them, Alice and “Buck”, and repeating Contact Crack on Temple Crag. Alice and “Buck” are two of the sand-heaps east of the Palisades, on a ridge extending east from Temple Crag. Since I have climbed all the possible alternate peaks out of the North Fork of Big Pine Creek, and any South Fork peaks require fording a wide, deep stream, I felt that I had little choice but to accept the suck.

We started out along the South Fork trail, then turned north a bit above where it crosses an old road. At first, the climb was bearable, with sand, brush, and cactus on a moderate slope. As the slope increased, so did the misery. Michael, Ron, and I tried to the right of a drainage, while Bob and a few others tried to the left. I soon found myself on all fours, grabbing at large-ish rocks that didn’t move too much so I could make progress with my feet. Ron, shirtless, struggling along with me in a similar fashion. All the while, I had to dodge or whack various bushes, some with spines. The occasional granite protrusions were invariably rotten. The southeast slope was baked by the morning sun. Oh, and there were mosquitoes.

Telling myself that the misery must end if I kept heading uphill, I put on some angry music and got to work. Some time later, I looked up and realized that I was probably headed for Alice rather than “Buck,” my intended target. However, since it was too late to easily change course, and since I would never be this close to the summit of Alice, I chose to finish it off. More sandy misery ensued.

From Alice’s summit, it was clear that Buck would be much less painful. Dropping down to the saddle on sand, I followed mostly-stable boulders along the ridge to the high point, where I found a cairn with a bone inside. I expected to meet some of the people who climbed Buck directly, but evidently the route they chose was both more fun and slower.

Descending Buck to Contact Pass was annoying, but fast and straightforward: I dropped down a series of loose gullies, occasionally crossing ribs to the west to get closer to Contact Pass. I landed almost directly on the pass, to find Tom and Ephrat resting up to climb the crack. I had planned on trying to catch them on a traverse from Temple to Gayley, but did not expect to see them so soon.

I scampered up the crack while they put on rock shoes, then stood around to take some pictures. Once they were done, I took off again up the long talus climb to the summit ridge, and the brief, exposed traverse to the summit itself. There I met Tom G., JD, and Adam, all of whom had gone directly to Temple Crag. Tom G. soon took off for Buck and Alice, but I hung around until Tom and Ephrat arrived. Both disappointed me by contouring along the summit ridge instead of going directly along the top and jumping the small gap.

It was getting late, and none of us felt much like heading to Gayley, a long, intricate traverse with much class 3-4 climbing and some bits of easy 5th. I retraced my steps down the talus and crack (making it look harder than necessary), then had a good boot-ski down the north side of Contact Pass, evidently impressing Matt, who watched from below.

I ran the North Fork trail until I met up with Evan and Jeff, then slowed down to talk with them for the rest of the trip. Evan has been backpacking in the Sierra for a long time, and knows many trails that used to be maintained and well-used, but have since deteriorated. For example, the trail up to Dragon Lake and Dragon Pass used to be signed and maintained. Sadly, the efforts of both hikers and trail workers are now mostly focused on a few overused areas. 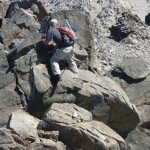 Adam on the summit ridge 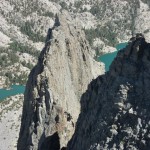 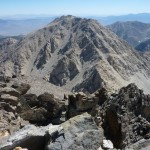 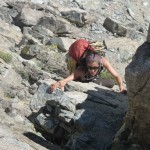 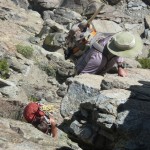 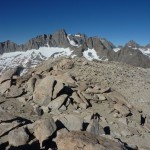 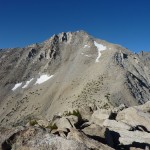 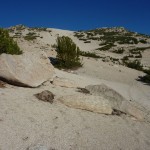 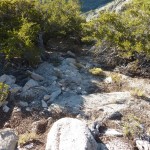 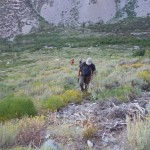