Bob seems to be on a mission to climb as many of the Minarets as he can, and Waller was next on the list. It stands apart from the main Minaret ridge and, at 5.2, is one of the easiest left. A healthy crowd snuck through the Devil’s Postpile entrance shake-down for the 6 AM start, with six of us doing Waller and the rest aiming for Volcanic Ridge, last year’s challenge peak.

We shared the endless, dusty, horse-dung-strewn approach to Shadow and Ediza lakes, then went our own separate ways. I guess the views were spectacular as usual for the area, but I have been on this trail too much to take note. For Waller, we headed along a maze of use trails south of Ediza toward Ritter Pass, a low point in the ridge south of Ritter. A few hundred feet above the lake, we donned crampons to fight the bullet-hard snow (I stepped on a nearly flat patch and instantly fell). The sun-cups were noticeable but tame.

Rather than circle over the pass, we short-cut over the ridge to the south and across another rock-hard snow-patch. Here we faced a typical Minarets scene: horrid loose talus and blocky basalt ridges, fractured at odd angles, forming a vertical maze with few distinct landmarks. The guidebook suggested climbing a gully to a white slab, but that was less than helpful; in fact, it was unclear which fin was Waller’s west ridge.

Bob and I chose the first suitable gully and scrambled to the ridge, trying not to knock rocks down and kill those below. The view was less than encouraging: steep-looking climbing to the south, a smooth face west, and a cool overhanging pillar north. We retreated a bit and tried a scree gully over the ridge to the south, which allowed us to make more progress up a partly snow-filled chute.

The terrain and route description finally began to agree near the top of the chute, where a short chimney (supposedly the 5.2 part) led onto the ridge. Though it was steep, it had the pleasantly positive blocky holds that make you feel like a real hero, and we soon found ourselves on a flat, clean section of the ridge.

Another bit of steep climbing on positive edges got us up the west side of the ridge, and from there it was a fun, exposed class 2-3 scramble to the summit. The register was a real treat: an old metal SRC box containing a nice booklet signed (in the ’90s) by Eichorn and Waller, the first ascent party, and unsigned since 2004. It was strange to find such a rarely-climbed peak in the middle of one of the most heavily-trafficked areas in the range.

I felt bad returning to the trailhead after a single peak with such a long approach, so Tom (a surprisingly fast scrambler) and I explored the ridge southeast to “The Gap”. The original (5.4) route supposedly climbs this ridge, but we found nothing after a bit of exploring, and returned over the summit and down our original route. The Smart Thing would have been to climb from the gap and descend either it or our ascent route.

By this time, the snow had softened nicely, and once past the suncups, I enjoyed some lovely shoe-skiing. Then it was just miles of dust, tourists, and backpackers to the car, which I reached a few minutes after Bob. Happily, a national parks pass will now get you past the shake-down station (it didn’t last year), so I was able to leave the valley before 7 PM and sate my hunger for Taco Bell. 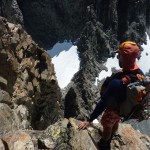 Tom not liking the options 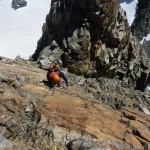 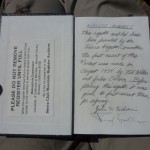 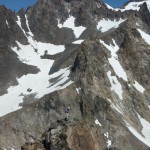 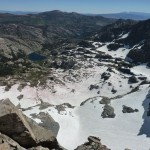 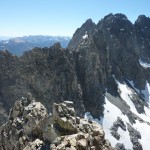 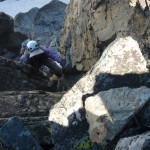 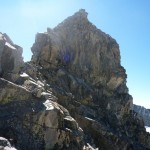 Avoiding snow in a chute 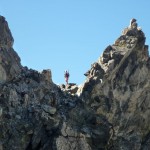 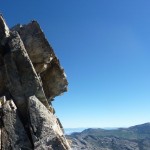 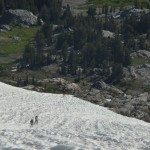 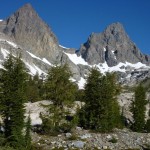 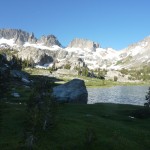