(I’m catching up on some backlog, Challenge day 3 was less-than-stellar.)

Rising 6,000 feet from the valley to its east, Mount Eddy would be a fine-looking mountain if it were not dwarfed by Shasta on the valley’s other side. Done with Shasta and locked out of Lassen, we looked around for other nearby targets and came up with Eddy, the highest point west of I-5.

We started from a PCT trailhead north of the peak, down a long, paved, single-lane Forest Service road. This section of the PCT travels through pleasantly open forests, with views of rolling hills to the west and the Trinity Alps near the horizon. The area seems to be popular not just with PCT through-hikers, but also with locals out for a hike, and we met a number of groups hiking and camping.

Shortly after an unpleasant encounter with a large dog — it barking with raised hackles, us looking apprehensive, his owner stupidly telling us “oh, he’s nice” and the dog “come here and be quiet!” — we met a large group with a whippet. Like all other greyhounds and whippets I have met, she was friendly but not annoying. Unlike the others, she followed us a good half-mile up the trail; I was a bit disappointed when she finally turned around and headed back to her owners.

Deliberately or not, the trail is constructed so that you do not see Shasta until you are on the summit. Such a prominent peak to the east being hidden on switchbacks up a south ridge seemed improbable, so I like to think that it was done on purpose. We sat for awhile on the summit ruins (probably a mine or forest lookout), trying to convince two local women that Shasta was a straightforward climb, then headed home for part of a long drive back to Reno, made longer by some “interesting” route choices. 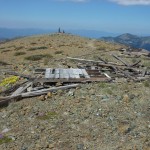 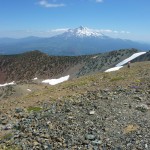 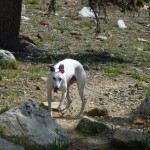 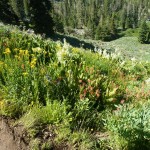