With bad weather forecast for the next couple of afternoons (it’s raining steadily as I type), I could either do something short, or do something quickly. I chose the latter, running Pilot Knob from North Lake. The route climbs 6 gradual miles to Piute Pass, then follows the Piute Pass trail for awhile before leaving it to head cross-country across Humphreys Basin to a saddle east of the summit. The total round-trip distance is somewhere around 23-25 miles, and I hoped to take around 6 hours.

My bowels woke me with their displeasure before my alarm — never a good sign — but fortunately remained largely uncomplaining for the rest of the run. I ate, filled my belt pack with two power bars and a cookie, and was off by 5:05, stopping at the campground to fill my single bottle.

After a gradual start, I found that I was moving well, jogging more than walking on the trail to the pass. The sky was gray and partly cloudy as dawn reached me, but it looked like the rain would hold off for awhile. I reached the pass in 1h15, and stopped to tighten my shoes before heading down into the basin. Although most of the snow had melted, the ground was often wet and boggy, and streams flowed across and along the trail. When it looked like the trail was dropping too low, I struck out to the northwest into the basin, toward the low point east of Pilot Knob.

While it is impossible to get lost in Humphreys Basin, it is all too easy to make poor route-finding decisions. The basin sits above tree-line, with the impressive Mount Humphreys always visible to the east. It is crossed by rolling granite hills running mostly northeast to southwest, and filled with numerous bogs, streams, and lakes. Since Piute Pass sits at its southeast end, one almost always finds oneself hiking across rather than along the hills.

I aimed more or less straight for my goal, meandering a bit to try to pass through low points in the hills. My route wasn’t optimal, but the only really expensive mistake I made was trying to traverse high on Pilot Knob’s south side to the saddle. I saved perhaps 50-100 feet of elevation loss, but ended up struggling through steep slabs and forest instead of flat, runnable grass.

I finally reached the open terrain below the saddle, from which class 2 boulders led to the summit. Checking my watch, I saw that I was less than 3 hours from the trailhead, so I turned up the pain and reached the summit — at the far end of the ridge — just before the 3-hour mark, feeling way too pleased with myself.

Like Columbine, Pilot Knob is an undistinguished peak surrounded by its betters: Humphreys to the east, the Glacier Divide to the south, the Sawtooth and Seven Gables to the east, and Merriam and Bear Creek Spire to the north. A normal July sees several visitors, but I was apparently the first person to summit this year. I took in the views while “fueling on” (ultra-runner-speak for “eating”) half my cookie, enjoying the summit for 15 minutes before heading back. I had only half a cookie left, but only needed enough food to last to the pass — I rarely bonk running downhill.

From the summit, I had been able to plan a better route for the return: drop to the meadow below the saddle, then stay to the southwest, on or near high ground along the edge of the basin. The return proved much more efficient than the way out, and the run across rolling grass and granite was glorious. Staying near the edge of the forest at the basin’s south edge, I ran into the Piute Pass trail as it crossed a particularly large stream.

I passed my first hikers of the day as I jogged the trail to the pass, three men either camped nearby or fishing for the day, and hoped they enjoyed being rained on. I started feeling tired near the pass, but still had enough energy to jog most of the flatter terrain, and to make decent time down the other side. Many sections east of Piute Pass are full of rocks and awkward, giant steps, limiting me to a careful jog, but I was able to open up on flatter sections near the lakes, and on the smoother, lower trail, reaching the car again in 5h40, better than expected. The rain, forecast for 11:00, came at 11:30.

Two power bars and a large cookie are far less than one can digest in 6 hours (1500-1800 cal), and far less than one consumes in 25 hilly miles (over 2500 cal). But apparently larger-than-usual meals the previous day made up the difference, topping off my glycogen stores, as I was never truly lethargic. Something to think about. 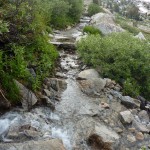 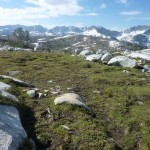 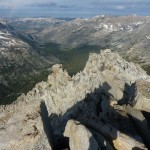 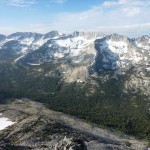 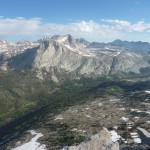 Merriam, etc. to the north 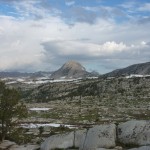 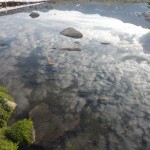 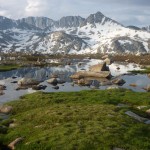 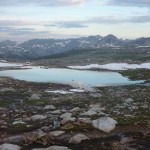 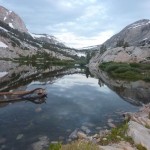 This entry was posted in California, Nutrition. Bookmark the permalink.