Columbine was a last-minute, “what-do-I-do-now” peak. I had planned to check out the notorious Farquhar route on the west side of Middle Palisade, but the bridge over the south fork of Big Pine Creek was destroyed last winter, and the stream crossing was more than I felt like doing at 6 AM, especially with no spare shoes.

On the hike back, I thought of other useful things to do with a shortened day, and settled tentatively on dragging rope and rock shoes up Thunderbolt from South Lake to figure out the summit block. On the drive, however, I thought better of this. Giraud, Columbine, and Isosceles are all in Dusy basin, and therefore afford good views of the south side of Thunderbolt and Palisade Basin. Columbine being the highest and easiest, with the best view, it seemed the obvious choice.

Thanks to the late snow, Bishop Pass was not the mindless cruiser it is when dry. There were several snow crossings, and two submerged water crossings. The first can be avoided via a use trail to the left; the second by crossing a snow bridge downstream. None of the snow crossings was particularly treacherous, and one of the pack companies even had two cowboys out shoveling a path. They had been at it a few days, but hadn’t made much progress.

The standard route up Columbine is a class 2 scramble from Knapsack Pass, the obvious low point of the ridge southeast of the Dusy Basin trail and a landmark along the Sierra High Route. I followed the trail for awhile, then struck out cross-country for the pass. Cross-country travel is easy in Dusy, so I probably should have left the trail sooner.

As the route to the pass turned to sand and blocky talus, I stopped angling south and headed straight up the slope. I eventually spied a gap and, with a bit of class 3, gained the ridge midway between the pass and summit. The ridge was slow going though a maze of large talus, but I soon spied the large, phallic summit block, and climbed to its tip. There were two registers: a film canister containing an amusing case of mistaken identity from 1961-1962, and a notebook with more recent visitors, including a few familiar names.

The views were as great as advertised, including the Palisades to the north, the Black Divide from Devil’s Crags to Black Giant to the southwest, and more. After lunch, I decided to try out the traverse to Isosceles. It is supposedly class 3-4 from the northeast, and harder from other directions, but getting to its eastern ridge did not look hard. After a false start along the ridge crest, I dropped to the east on terrain that was either terribly loose or terribly steep — but thankfully never both at the same time — and made Isosceles’ east ridge without much difficulty.

I found plenty of difficulty crossing gaps on my way west toward the high point. After negotiating some 4th-class goodness, I was finally stymied by the last gap, which looked like it required climbing two exposed, parallel cracks, mantling onto a block, and various other treacherous nastiness. I later found that Bob Burd had been defeated by this same gap several years ago, and that it’s supposedly 5.4 with correct route-finding.

Oh, well. Down to the huge unnamed lake below Thunderbolt Pass, up the benches and slabs to Bishop Pass, back along the endless trail to the car. 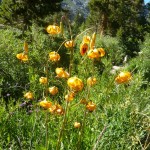 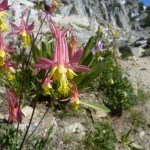 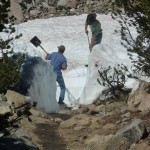 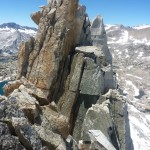 Isosceles’ summit from the east 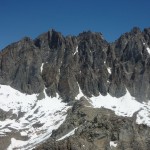 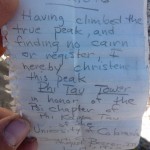 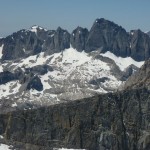 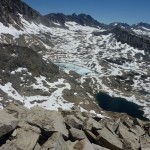 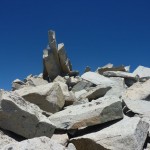 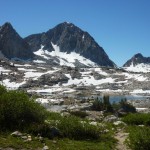 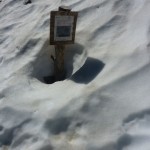 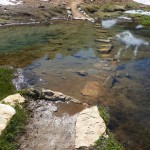