Regan Peak is what you see on the other side of Sawtooth Lake, at the northern end of the Sawtooth wilderness. Since it was advertised as a 4th class scramble with a trail approach, I figured I could make it to the top and not get lost.

While getting ready at the trailhead, I saw a man walk by with a dog and a gun. Not a hunting dog and a rifle, but a pet dog and a medium-sized pistol. That’s legal, of course — even in national parks these days — but it hardly put me in a good mood towards my fellow man. I assume he was himself against his fellow hikers, since I doubt it would do much to a bear or an enraged elk, and he probably couldn’t brain a grouse with it for dinner.

Moving on, the trail was snow-free until just below Sawtooth Lake, where I was accosted by someone’s “friendly” dog. The snow was hard-packed in the morning, so I traveled quickly around the lake, and on to the second small lake beyond, where I believed the climbing started. It looked like I could crampon up a snowfield, then scramble along a minor ridge to the skyline.

Alas, beyond the snowfield I ended up on trouser-filling terrain consisting of loose rock, steep dirt, and small patches of snow. With much nervous sweating and swearing, I reached the skyline and found walk-up terrain on the other side. Figures.

There was a bit of a fun block-maze to the summit itself, but nothing too difficult. The register canister, a thin-sided aluminum thing, contained only a note from a previous climber that the original register had been stolen, so I signed the note, then looked for a different way down.

I made for the large snowfield that slanted directly back to Sawtooth Lake and, after a bit more loose rock and some treacherously steep and soft snow, had a nice plunge-step and glissade descent to the lake.

There’s a lot to be said for the Sawtooths: They have fairly good trail access, and since they are a desert range, there is little undergrowth to get in the way of bushwhacking. Not many visitors seem to venture beyond the trails, and many of the peaks have no easy route, providing awesome solitude.

On the other hand, they are not far above treeline, so much of the approach can be in the forest. Also, they have a nasty mosquito season, which seems to occur exactly when I timed my visit.

The Sawtooth Wilderness get a few things very right. For example, the trailheads allowing dogs also have a supply of leashes (cords with a loop at one end). Most people break the rules because they are lazy, not malicious: they left their leashes in the car or at home. Pieces of cord cost almost nothing, and make it easy for everyone to choose to do the right thing.

However, it’s among the most annoying National Forest Wildernesses I have visited. The popular campgrounds, and even some picnic areas, have been franchised out, so you now pay up to $16 for a campsite (picnic table, fire ring, shared outhouse), or $5 for a few picnic tables together. Things are better outside the Redfish Lake area, but still not great.

The developed trails are built for pack animals, with absurd near-horizontal switchbacks that eat up miles to gain relatively little elevation. I prefer not to cut switchbacks, but it was impossible to resist in many places.

Finally, note that while it no longer requires fording the creek, the upper Hell-roaring Creek trailhead is thoroughly hosed. A survey turned up that the parking area was about 200 yards into the designated wilderness area. The easy solution would have been to redraw the line. What actually happened was: they closed off the road a whole mile before the wilderness boundary, and have temporarily provided parking for perhaps 4-5 vehicles. Parking won’t be an issue — I found a slot in the woods — but the extra road-hike is a pain.

Stanley’s not bad for a town of 100 people. The library has free, donation-supported wireless and a small selection of current magazines. The Chamber of Commerce has a sparkling public bathroom, friendly staff, and some genuinely useful information. 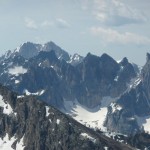 Classic Sawtooth peaks to the south 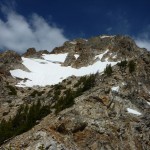 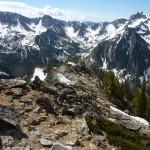 …and the easy side. 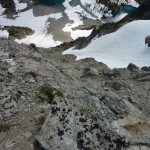 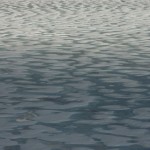 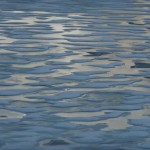 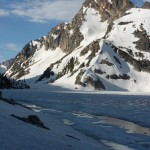 This entry was posted in Idaho, Logistics. Bookmark the permalink.