I’m not really a high-pointer, but when I realized that both tagging Borah and visiting the Sawtooths would only cost me about 200 driving miles, I couldn’t resist the chance.

Some farmer with a herd of maundering insomniac cows decided it was a great idea to turn them loose near the trailhead; I never knew there were so many ways to say “moo,” or that some cows are nocturnal. I still managed to get an early-ish start, and blasted the super-steep trail to treeline. I got a clear view of the rest of the route where it first levels out at the ridge: a long, slowly-climbing “C” curving south. I also got a face-full of miserable wind.

I tried to strike up a conversation with a friendly high-pointer from Chicago, but the wind made it too frustrating, so I gave up and moved on. The use trail through the talus was mostly clear of snow, and where it crossed snow-patches there was a good boot-pack. I tried to drown out the wind with loud, angry music, but I still wasn’t loving life.

While “chicken-out ridge” was slow class 3, the climb was much easier above that. I managed to lose the trail, but it didn’t really matter, since it was only marginally better than climbing the mixture of talus and rock ribs.

I thought I might do something really cool and tag Horstmann in the Sawtooths in the afternoon, but a combination of bushwhacking and total unfamiliarity with the area left me with a long, hot walk. Oh, well.

Borah rose seven feet in a 1983 earthquake, which also left an unvegetated stripe separating the valley floor from the range. I seem to have a knack for running across unexpected recent earthquake sites. 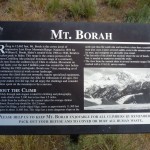 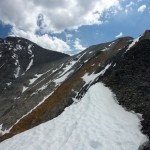 Upper route from below chicken-out 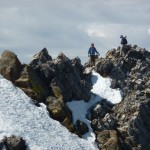 Father and son on “chicken-out ridge” 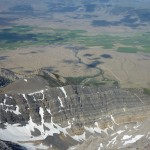 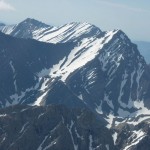 Layers to the SSW 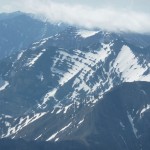 Layers to the SSE 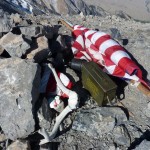 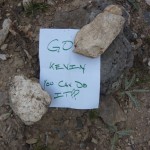