Being more of a peak-bagger than a climber, I don’t often climb the same mountain twice in a week by different routes. But I also like to take advantage of opportunities to become a less-bad trad climber, so when Keith suggested we climb the classic lower Exum ridge, I quickly agreed. As it turned out, the climb finally got me to the Grand’s summit in clear weather.

A cold night made for perfect snow up to the lower saddle, where we waited around awhile for the sun to reach at least part of the ridge. The Exum guides were out for a photo shoot, so their tube tent was empty, but we could see them standing in a gap in the farthest buttress.

The route description said to head toward the foot of the next ridge, then scramble back up a left-facing ramp. After an initial 5.6 chimney pitch, the route continues over easier terrain to the 5.7 second pitch. We chose a left-facing ramp and, after a long and spicy scramble over rock, snow, and ice, reached a gap in the ridge’s spine. There was no sign of a chimney, but we eventually figured out that we had scrambled up a ledge to the base of the second pitch. Oh, well.

Keith offered to do the leading, and I wasn’t entirely comfortable leading 5.7 in mountaineering boots, so I settled in for a cold belay at the base of P2 while he made his way up a hand crack and onto the ridge. Being thoroughly cold, I started climbing in gloves, and made it about half-way before having to remove them. Climbing in both gloves and boots totally changes the game: your feet have no feel, but edge better than you expect; your hands still jam well, but you can only use large and/or positive face holds. The result is that while you have to pay even more attention to foot placement, you climb more on your arms, with more jams, liebacks, and counter-pressure.

P3 was a miserable, cold, snow-choked, shady chimney. Keith writhed for awhile leading it, kicking bits of ice in my general direction as he looked for tool placements, stopping periodically to warm his bare hands. I opted to climb it with gloves rather but no axe; this was probably a mistake, as the extra reach might have helped. After way too much time spent flailing around in the crux, I somehow got through, and stemmed up through a hole to the belay.

P4, the “black face,” was probably the best of the route. It wanders right, then left over near-vertical black rock with many cracks and sharp edges. Whenever you seem stuck, a bit of feeling around will reveal a jam or some big, positive hold to yard on. The face is littered with old pitons, some of which are actually useful.

P5, which leads to the Wall Street entrance for the upper Exum, was surprisingly spicy. It climbs lower-angle but smoother golden granite, with more distance between possible gear placements; Keith had to run it out somewhat on rounded nubs between pieces. Other than one traverse where a fall would have meant a nasty, scraping pendulum, the pitch wasn’t nearly as bad to follow as to lead.

Wall Street was still snowy, but the step-around looked much less intimidating from above than I remembered it from last year. We repacked our gear and soloed the rest of the ridge. I was finally back in my element, moving unroped over moderate rock. The gullies were filled with snow — some useful, some useless slush-over-ice — but there was enough exposed rock that the climb was probably not much more difficult than when dry.

I was surprised how much I remembered from last year’s cloudy climb. The “golden staircase” seemed easier as I moved more confidently over the rounded, knobby granite. The “wind tunnel” was, again, windy and partly filled with treacherous ice (Keith nearly took a wind-propelled icicle to the face), but the worst could be passed on the right.

Getting to the “friction pitch” was harder than I remembered due to the additional snow, but the pitch itself was blessedly snow-free. Rather than traversing right into the gully as I did last time, I opted to go straight up the ridge. I can’t say which way is easier; both require a few balance-y moves near the beginning, but neither requires true friction climbing.

After that, it was mostly a boot-pack up a snowy ridge to the point where you can cut over to the Owen-Spalding rappel. Keith bonked hard around here, probably because he wasn’t eating enough; I brought and consumed around 1600 calories, while he had a couple of sandwiches. We stashed our packs and went to tag the summit.

The snow added the most difficulty on this last section, normally an easy scramble. With holds and ledges covered with snow in various conditions — and even some surviving rime — it required some thought, but we eventually figured it out, and even followed a nice skiers’ bootpack for the last 20 yards. I enjoyed finally seeing the view, though I was disappointed that Owen is barely visible from the summit, and the Owen-Grand ridge is entirely hidden. The climbers’ ranch, 7000 feet below, looked discouragingly far away.

We found an easier rappel straight down, with an intermediate rap station on a tiny hidden ledge for making two single-rope rappels. We returned to the ranch via one hellish slush-slog, one short hike, two epic glissades, one boot-pack, and one longer hike.

Oh, and one black bear (sorry, no pictures). Trudging down Burnt Wagon Gulch, we came around a corner to find a foraging bear maybe 50 feet away. We reacted to the surprise by looking big and shouting, while the bear reacted by taking a few steps toward us, intending to do I’m-not-sure-what. Evidently he thought better of it, but rather than running the other way, he simply turned his back and continued foraging, with an occasional glance over his shoulder in our direction. I was more irritated than frightened: it was only a black bear, but its total habituation to humans seemed neither natural nor healthy.

Purely as a climb, the lower Exum is not as long or aesthetic as Irene’s Arete. On the other hand, it is not just a climb, but a route to the top of the Grand. Now that I know where to go, I think I would be comfortable soloing it with rock shoes when dry. 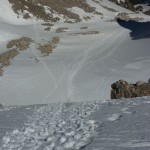 Bootpack down from lower saddle 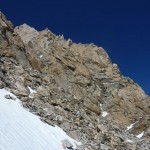 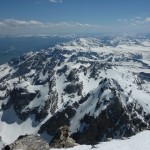 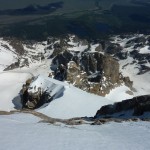 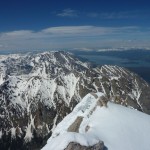 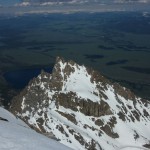 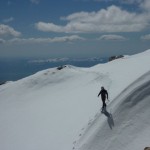 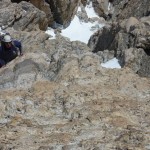 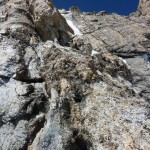 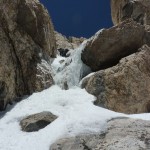 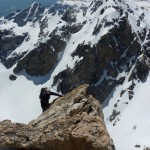 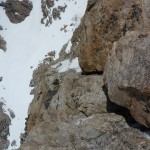 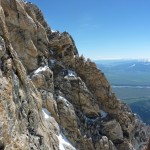 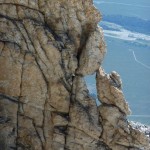 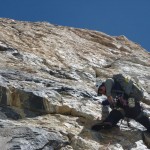 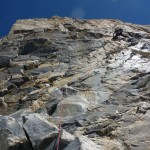 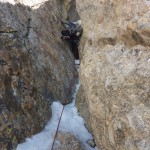 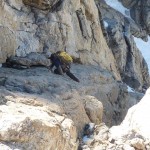 Scramble to base of P2 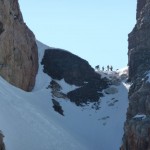 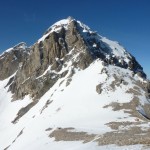 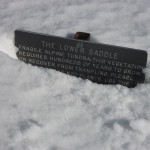