Mount Moran’s long and notoriously bushwhack-y approach and difficult standard route (the 5.5 CMC) discourage many climbers. However, a low snow-line and a partner who knew the approach (ranch old-timer Erin) made the easier Skillet Glacier route (moderate snow) seem reasonable, so I scraped myself out of bed before 4:00 AM for the attempt. This being the first good weather day in awhile, I had plenty of company at the cooking shelter, with others seizing the chance to attempt the Middle and Grand Tetons.

We started on the Skillet Lake trail a bit before 4:30, and by 6:00 we reached the end of actual trail and the start of the notorious bushwhack. Erin’s knowledge from previous attempts saved time here, as we followed a game trail across one small and one larger stream, then turned up a ridge, avoiding most of the underbrush and downed trees on the way to the old moraine and avalanche run-out. Unsurprisingly, we were not the only users of the game trail: we followed what I believe were mountain lion tracks most of the way (four-toed with a pad, larger than my palm). I silently took comfort in my possibly-mistaken belief that mountain lions prefer to eat women for their higher calories-per-effort value.

The ridge and bits of game trail led easily to the old moraine, where we donned crampons and began the 5000-foot-plus snow climb around 6:30. The snow was perfect for cramponning on the flatter run-out, but softened quickly as we entered the warm, sheltered couloir. The old slides from side-chutes afforded easy climbing, but unconsolidated sections had deteriorated to knee-deep postholing through a thin crust.

Surprisingly, there were three other parties on the glacier: one guide/client and two pairs of skiers. We chased the skiers up the steeper part of the skillet’s pan and handle, catching them at the summit ridge. Thankfully, the pan was mostly covered by consolidated old slides, and the handle had both a solid runnel down the middle and a decent boot-track from the previous parties.

At the summit ridge, we went straight from calm t-shirt weather in the couloir to frigid wind for the 100-yard jaunt to the summit. We spent a few minutes taking pictures and admiring the thoroughly-rimed Owen-Spalding route on the Grand, then retreated to a spot in the warm, sheltered skillet handle for lunch. From this perch, I looked over to the Falling Ice glacier and the standard CMC route, which seemed to be in awkward condition.

Thanks to some epic glissades, we caught the skiers at the base, then promptly lost time thanks to my decision to cut the corner on our approach route and head diagonally southeast to Bearpaw Bay. It turned out that the ridge we climbed bypasses dense undergrowth on the moraine and a swamp below. So we scratched, squelched, and suffered our way through the suck to the bay. Lesson learned. 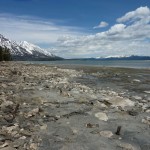 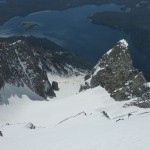 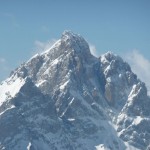 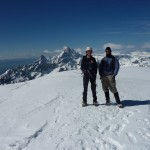 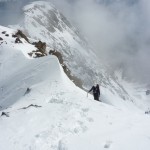 Topping out on the skillet 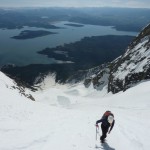 A long ways down 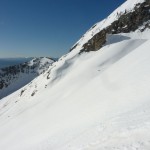 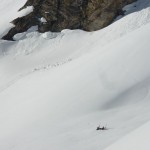 Skiers taking a break in the pan 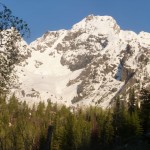 One response to “Moran (Skillet Glacier)”