The day started out promising, with clear skies to the south, so I packed up some sandwiches and headed for Garnet Canyon. The trail had melted out amazingly in the last week, so it made sense to take the first couple of switchbacks rather than kicking steps straight up the snow. There were also a few more sets of tracks, so I was able to find the cut-over to Garnet Canyon without too much effort.

I crossed a huge slide on the way along the canyon’s north side, with rocks and trees mixed in with the snow, and noticed some smaller slides on the south side. Farther up, I met the source of the fresh tracks I had followed, a Jenny Lake climbing ranger named Jack, checking out the snow conditions. He was impressed by the amount of remaining snow, and wary of impending avalanches; when pressed, he thought that a week of stable weather would be needed to settle things down.

I had originally planned to make a loop, going up one side of the hourglass and down the other, but I opted to both climb and descend the easier west couloir. As the “snow” (i.e. thoroughly waterlogged, calf-deep slush) steepened, my progress slowed to a pathetic flounder, and it felt like it took hours to reach the point where the east and west couloirs split. Conditions improved slightly in the couloir, but I was still forced to use my hands in a sort-of crawl to prevent my feet from sinking and sliding. While the underlying rock is supposedly rated 5.1, the slope was moderate enough that I doubt the couloir itself is more than 3rd class.

From the top of the couloir, I climbed a dike to the east-west ridge between South Teton and Nez Perce, eventually finding myself on Nez Perce’s annoying west sub-summit. A short, spicy downclimb on snow- and ice-crusted rock brought me to the notch, and more careful climbing and backtracking brought me to the summit just as the clouds closed in. I took hasty summit shots, layered up, had a snack, and started thinking about getting back down.

I vaguely remembered that the standard route traverses past the summit to come at it from the east, so I descended the moderate east slope, found a cairn, and proceeded to waste time trying to downclimb wet, snowy rock to the next shelf in a worsening blizzard. When I paused to think, I wrung the water out of my wholly-inadequate fleece gloves.

Some other cairns led me to a rap station which, while it lacked a downclimb alternative, was at least somewhat sheltered from wind strong enough that, when I spit into the void, the phlegm hovered in space for several seconds. I put on the rest of my clothes, put in my headphones, and thought about how long I should try to wait out the storm. (As it turns out, that wouldn’t have worked — as of 9:30 PM we have steady rain and thunder.)

At the next break in the storm, I headed back west, and eventually found a path to the next lower shelf and my tracks from the ascent. After that, it was not difficult to downclimb the ridge and glissade the couloir, riding a tame little wet slide into the valley. Then it was just a long, wet walk back to the ranch, with its showers, roofs, and other amenities. 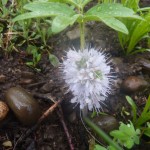 Random flower in the valley 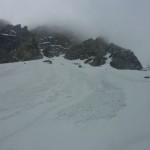 My contribution to avy control 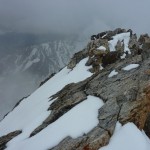 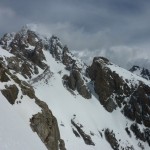 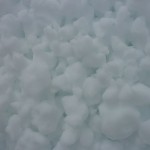 Close-up of a wet slide 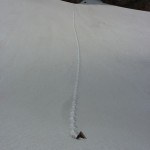 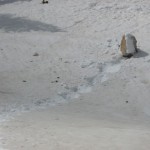 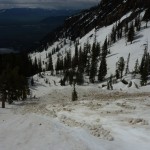