Other than a brief taste on Owen last summer, I have not had a chance to climb ice, so I decided to take in the Ouray ice festival and at least start to fill this hole in my knowledge. Ouray has a narrow, deep, faintly sulfurous canyon running into town from the southeast; during the winter, a line of sprinklers creates frozen cascades on its southwest side, about a quarter mile from town. This is the Ouray ice park.

I showed up at the park Friday, geared up, and hung around for awhile looking for a partner. There were clinics, but that’s not how I roll. After some fruitless loitering, one of the people running a sponsored (i.e. “free”) clinic took pity and offered to belay me a couple of times on the baby wall. As expected, it was pretty easy. Loitering again afterwards, I ran into Dirk, who I knew from the Sierra Challenge, and his friend Eric, and we headed out to the real ice. I ended up climbing some long WI3 or WI4 routes (the park map is less than helpful) in the “grad school” area with Eric, combining our 50m and 60m for a giant toprope.

Saturday, I caught some of the competition in the morning, witnessing some truly crazy mixed climbing on a route that was more rock than ice, and more overhanging than not. I gather that it’s impossible to create ice routes hard enough to challenge top climbers with modern gear. I did a bit of my own climbing in the afternoon, surprising myself by climbing a steep route that started with a pull-up onto a free-hanging icicle — without any hang-dogging.

So now I can say that I’m not a novice, and that I “climb WI4.” Despite having more gear, ice climbing seems simpler than rock: ice tools can hook just about anything, and can always be bashed into the ice if there’s nothing to hook; and once you get them set, they’re solid positive holds. It’s a lot of fun, and I hope to do more of it in the future.

Dirtbag notes: Ouray is pretty laid back about people parking around town or sleeping in their cars. However, it’s irksomely cold, with average lows in the teens and cold spells in the single digits or below zero. Plan accordingly, and be prepared for everything in your car to freeze solid. Mouse’s Chocolates and Coffee is open late-ish, and has wireless and coffee in addition to the high-calorie goodies. 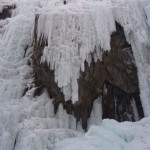 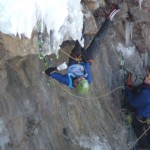 …or in your mouth. 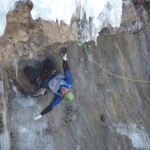 When the going gets tough, leave a tool on your leg… 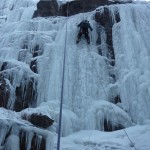 Eric on a steep section. 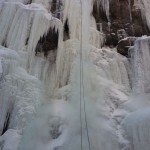 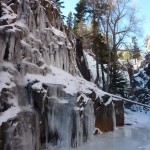 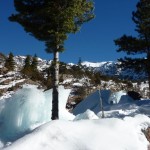 Top of ice park, with ice-makers. 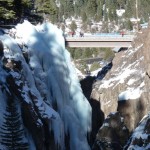 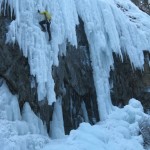 This entry was posted in Climbing, Colorado. Bookmark the permalink.