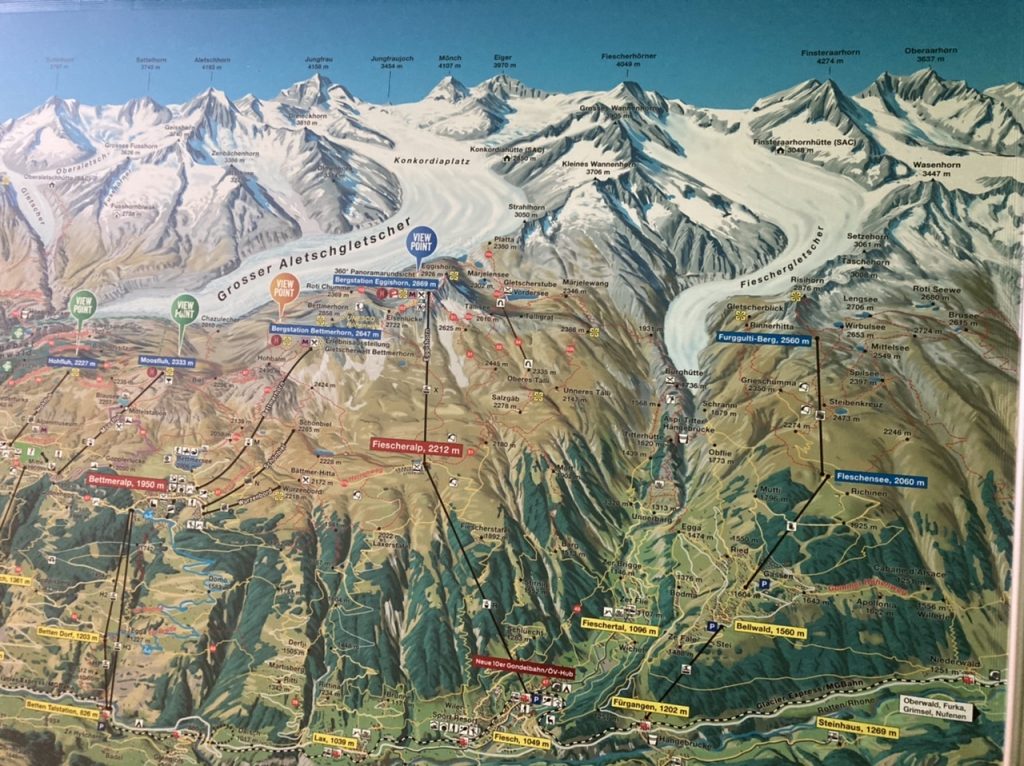 All this could have been yours

I really should not have let it bother me. My day from Fiesch over the Nufenen Pass was a mild and completely predictable version of what happens when money meets mountains, and Switzerland has plenty of both. It did not help that I had to defend myself against a thunderstorm at midnight, covering my gear with my rain jacket and huddling in my bivy. This worked as planned, and I survived with some discomfort and slightly damp things, but I would normally be living better on a bike or in my car. Because of my previous mission, I am traveling with the absolute minimum of gear for bike-packing and mountaineering, so when things get tough, I make up the gap with experience and suffering.

I lazed around much of the morning, waiting for my gear to dry and the weather to clear. There were lots of cyclists around, but none I wanted to talk to. There are two kinds of cyclists: adrenaline and endorphin junkies. I am the latter, but Fiesch has lots of gondolas, so the others were the former. They milled around the campground in their armor and full helmets, sometimes bouncing the suspension of their ridiculous downhill bikes, perhaps waiting for the trails to dry so they could go forth and shred. I was beneath their notice, and tried to ignore them in turn.

I finally managed to get started around 10:00, rolling back through the ski village to the main road, a winding two-lane artery. It leads to the head of the valley, then splits into three passes, the Grimsel, Furka, and Nufenen. The Furka is the most important, and has a railway tunnel beneath it to remain open year-round. I was headed for the Nufenen, which crosses the Alps’ spine into a valley that is geographically and culturally Italy, but for some reason politically Switzerland. Near the junction, I was curious to pass what looked like an enormous ren-fair, though I did not dare stop for a $20 turkey leg.

The Nufenen Pass is not as steep as the Iseran, nor is it gentle like the Grand Saint Bernard, so I found myself comfortably in my lowest gear for long stretches. I saw several cyclists, mostly roadies passing me, but it was more popular among motorists. None were overtly rude, but they were playing with their expensive toys on a weekend, and so could not help but be annoying. I did notice one large “hoonigan” decal, the international term for “unrepentant douchebag with a loud car.” I was riding into a bad forecast, and the clouds over the pass looked threatening. I looked around for possible shelter as I crossed treeline, and saw few likely prospects. So I pushed on as best I could, switchbacking to the col left of a small dam and several large wind turbines.

Fortunately the weather held, and I reached the pass to find sports cars cooling off and a horde of tourists milling around a small pond. Not wanting to take chances, I immediately put on a layer and headed down, bombing the descent to Airolo. The signs were all in Italian, but the road was striped and in fairly good shape, a jarring contrast reflecting the area’s Italian/Swiss nature.

I had a late lunch in Airola while deciding what I do. Part of me wanted to turn around and head back over the famous Gotthard Pass, but that would be foolish given the weather. Instead I headed down-valley on the winding local road, catching glimpses of the Autostrada as it passed in and out of endless tunnels. My plan was to head down to Bellinzona and over the San Bernardino pass, but by the time I reached Biasco I was sick of low elevations and main roads. I had noticed a road going up the Brenno Valley to another pass (the Songta Maria), and decided to take that. I made it as far as Acquarossa, where I decided it felt Italian enough to just camp out of the way. I sheltered from the evening thunderstorm below a shallow rock overhang, then eventually drifted off.

Switzerland has been a hard place for me to love, with everything more expensive than it “should” be and highly regulated. Sometimes it lives up to its stereotype as Mountain Disneyland. The closest I’ve come is to recognize that the Swiss like to do things right and follow the rules, two precepts with which I tend to agree. Things worth doing are worth doing right, and recognizing that you are not exempt from general rules is the basis of moral behavior (see the golden rule or categorical imperative). If you want to camp in the Swiss way, there will be clean restrooms, hot showers, and a comfortable shelter in which to play board games or even complain about the Swiss on your phone. That will also cost $25 per night, but camping right isn’t cheap. My problem is that I think some things, like campsites and trail food, aren’t worth the effort and expense to do right, and I don’t get that choice here. But I can at least respect the other approach.

All this could have been yours

This entry was posted in Biking, Europe, Meta. Bookmark the permalink.