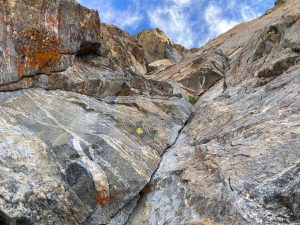 Like the Snaz, the Open Book is another one of those climbs that has been on my to-do list for years due to a lack of climbing skill and/or partners. I had planned for a solo day (more on that later), but when Ben asked if I was interested in climbing, I saw an opportunity, and dug into my bag of unfinished things. Ben, one of the interns, is young and strong, seemingly more interested in Real Climbing than the kind of stuff that I can do, but he seemed game for a moderate trad route. Given its name and description, this one seemed likely to be even more un-gym-like than the Snaz, with lots of stemming and a finger crack. Predictably, it turned out “the way it always does,” with a fair amount of thrashing and bleeding. 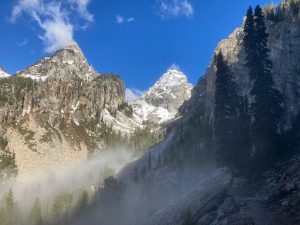 It was a cold morning, so we didn’t leave the Ranch until about 6:30. We passed the usual bear on the Garnet switchbacks, ignoring us as she fed on some plant. Based on the giant pile of green bear manure I had found earlier, plants seem to be the majority of their diet this time of year, an impressive digestive feat that can’t yield many calories. Just above, we saw a cub safely up a tree. The bears frequenting this hillside are disturbingly accustomed to people, and while they have not been aggressive, I wish they felt a more normal degree of fear. Preemptive use of bear spray would probably fix that, but I doubt the Park Service would approve.

Despite our late start, we reached the base of the climb while it was still in the shade and quite cold. I had hear of others having problems finding the route, but it was easy to identify, and required no shenanigans to reach. I happily gave Ben the first lead, and he chose the direct 5.9 crack start, soon regretting this decision as he wedged his hands into the frigid rock. I kept my running shoes on until the last moment, then followed, grateful to be on a toprope. I found myself consciously staying out of the crack where I could, and unconsciously using my palms and elbows for counter-pressure to spare my fingers. 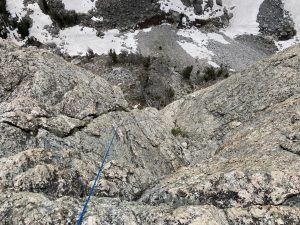 We were climbing on a 50-meter rope, and the first pitch as described was supposedly 60 meters, so Ben belayed at a stance somewhere below the official belay. Unlike the Snaz, there are no bolts on the Open Book, so it can be naturally split up like a normal trad route, with pitches where one runs out of rope or gear, accumulates too much drag, or reaches the base of a crux. I led our second pitch, featuring a “5.8 undercling/layback” that felt hard and insecure to me. I put in a couple of good cams as I went, trusted my feet, and was surprised to be able to pull through it. However, I was unable to find a good placement above that section, and couldn’t quite make it to the next stance. I tried out a few things, then went for it and took a nice 15-foot slow-motion fall before the rope finished stretching. I have a pretty good sense for when I am secure on rock, but am willing to go for it on gear. 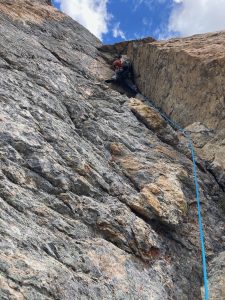 I thought about giving it another try, but my arms were tired and I was disappointed with myself, so I built an anchor and belayed Ben up. After taking over, he thoughtfully made his way through the layback, then up the namesake pitch, a greater-than-ninety-degree corner with a finger crack. I enjoyed following that part, but was definitely glad not to lead it. While my technique is mediocre and I usually bleed, I am fairly comfortable with hand jams, but trusting much weight to torqued fingers still feels like a terrible idea to me. I managed to stupidly fall right off the belay, but did the layback and the rest cleanly, albeit not always securely.

My head was not quite in the right place, but I don’t believe in being an animate haul bag, so I set off on the next pitch, traversing right under a roof before coming back left on easier terrain above. I struggled a bit with the first part: a crack below the roof offered all the protection I could wish for, but it was also seeping, making the hands and a few of the otherwise-nice feet wet and slick. Teton rock is stickier than it looks, even when wet, but I am still adjusting to what I can trust on steeper ground. I finished the pitch without incident, building an anchor where I thought the guidebook suggested.

Ben led the next, opting for what I think was the “5.9+ roof move,” a sketchy-looking thing around the right of a bulge. I screwed around for far too long following, trying another route left of the bulge in part because it looked easier, and in part because that was where the rope ran. I finally figured out that it was harder, backed off, moved the rope over a bit, and pulled the roof without taking what would probably have been a fairly harmless pendulum fall. 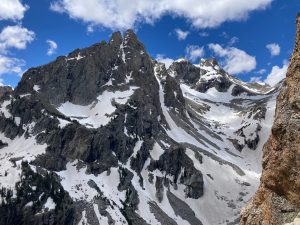 I led the final 5.7 (?) pitch, making it look harder than it was, then we packed up and traversed right to pop out at the base of the Lake Ledges above Amphitheater Lake. We had carried ice axes all day, and used them for the five minutes it took to descend to the lake. I suppose mine could have been helpful for self-arrest, but most of what I did with it was hack away at the slush to free my leg from a self-filling posthole. Axes stowed, we followed the beaten-in path through the snow back down to the summer trail, then fast-walked home to the Ranch. My shenanigans made Ben a bit late for his evening shift, but I don’t think he got in too much trouble.

Having done both recently, we agreed that the Open Book was better than the Snaz. While it is not as long (6 vs. 8+ pitches) or as hard (5.9 vs. 5.10), it is cleaner and more sustained. I was surprised that the highly-rated Snaz involved as much walking while dragging a rope through debris as it did, especially on its first two pitches. While the Open Book had a walking finish, it was rarely low-angle enough to collect debris, or to be dull (at least for me). An efficient team should be able to climb both it and neighboring Irene’s Arete in a day, making for a truly spectacular outing. Thus endeth my trad climbing for the summer.