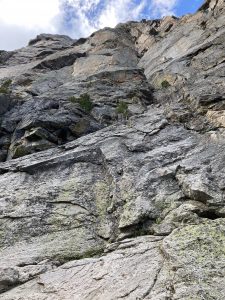 (Photos featuring Yours Truly, and some others, courtesy Robert. There was some other stuff in the Bend area, including more skiing and cycling, but that’s too far past and mostly of too little interest to write about. It’s a great place to visit, and I miss skiing from the car in June, but I wouldn’t want to live there.)

The Snaz is a Real Climber climb in Death Canyon, which has been on my radar for almost as long as I have been coming to the Tetons. I have failed to do it in the past because I haven’t had a capable partner, and because I have never been a good enough climber. This year was different in the first respect, with Robert emerging from his SoCal bouldering lair, and I hoped that four weeks of intensive climbing gym work would change the latter as well. Robert sadly had little time to spend at the Ranch — he is also a solid all-around mountaineering partner — but Saturday’s forecast of moderate temperatures and wind up high would at least be an opportunity to finally tick this classic Chouinard climb. 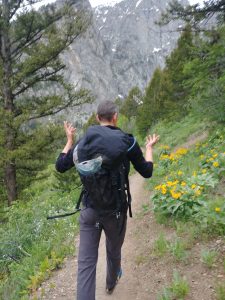 We started reasonably early from the Ranch, driving down to Death Canyon and up the rough dirt road to the trailhead. The road is rocky and has some deep puddle-holes, but it is perfectly drivable in a van or sedan with caution and patience. I have a bit of gear these days, but we used Robert’s: a light 70-meter rope and an absolutely massive collection of protection, with two cams from 0.1 to 3, a 3.5, a 4, and a set of nuts. In retrospect this was too much: the large pieces were nice, but most of the small pieces’ uses could have been covered by nuts. Also, since we did not rappel the route, the 70 was too much rope: the wind and roaring stream below made communication difficult, and it was tricky to link pitches without creating terrible rope drag. The short version is that I am not good enough to use a large rack and a 70m rope. First, I lack the judgment to eliminate rope drag on a long pitch. Second, the things I am able to climb are not steep and straight, but lower-angle and varied. This means that there are long sections of easy terrain that do not need to be protected, and twists and bulges that prevent the rope from running straight. This could just be old age and familiarity speaking, but I would have been happier with my old setup of a light 50m rope, nuts, single cams from 0.3 or 0.5 to the largest required, and maybe a couple of doubles or link-cams. 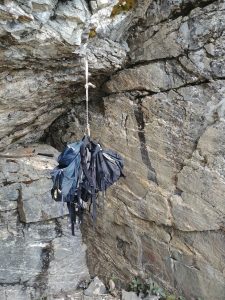 Be that as it may, the approach was pleasant and easy, hiking the familiar Death Canyon trail up to the edge of the moraine, then down past Phelps Lake and up the canyon along the creek, raging with snowmelt from the unseasonable warmth. The climbers’ trail was trivial to find, continuing off the end of the last switchback below the marshy, pond-filled flats of the middle canyon. I was not sure what to expect, but The Snaz and neighboring Caveat Emptor are popular climbs, suitably equipped with a good approach trail, bolted belays, and even a loop of cord in a sheltered alcove to hang your packs away from the waiting marmots. 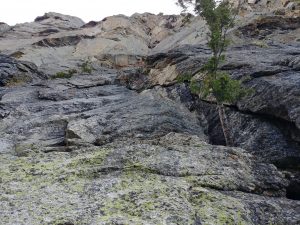 The actual climb is preceded by a short low-fifth-class scramble, which I assumed we would scramble in rock shoes. We divided up the gear, me with the rack and pack, Robert with the rope, and started up the approach pitch, an angled crack along the edge of a slab. At only 5.5 it should have felt easy, but I found myself unnerved, unsure of my feet and insecure. I backed down, tied in, and Robert belayed me as I climbed it again, this time having no trouble and placing useless protection. I was unnerved and unbalanced by the experience: it was moderate climbing that should not have given me any trouble, but my head was not in the right place. 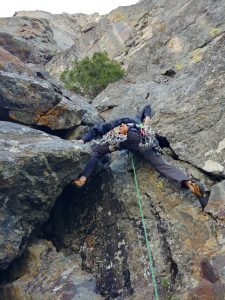 We walked up to the base of the real climb, and I led off again, linking the first two 5.7 pitches with our long rope. This climbing felt much easier, with mostly scrambling terrain and only a few steps that deserved the rating. I placed gear from time to time, trying to avoid creating drag, but was still dragging up slack by the time I reached the belay, the gear on my harness clanking and occasionally catching on protrusions. Trad often feels like climbing while fat and clumsy, making easy things hard and hard things possible. I reached the second anchor with a few meters of rope to spare, clipped in, and belayed Robert up to the start of the harder stuff. 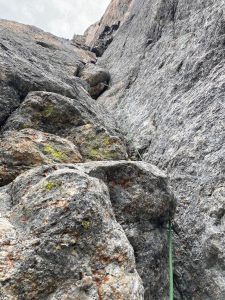 I was embarrassingly inefficient on the transition, slowly remembering the tricks and details, then Robert took off up the first harder pitch, which continued up the dihedral past a bulge and a roof. It did not look so steep, but he was taking his time, and as is often the case on the slicker golden Teton rock, it was harder than it appeared. The first crux required an odd layback to the right, while the second was passed by steep moves on black, positive rock to the right of a roof. I watched Robert steadily at first, but my neck soon tired and I spent more time looking across the canyon and down at the hikers below. 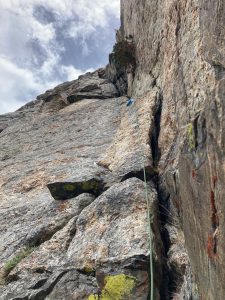 On belay from above the roof, I started up this first pitch of actual harder climbing, and was soon disappointed to find that I am, for the most part, the same awkward, thrashing, bleeding climber I have always been. I often feel that it makes no sense for the same grades to apply to face, crack, and slab climbing, since they require such different techniques. The same goes for training: while my time in the gym gave me noticeably more power and grip on the steep moves past the second bulge, it helped me hardly at all elsewhere. I was determined to climb the pitch clean, without hangs or falls, but it was a slow and awkward process. I worked my way up the first bulge, hesitating before committing to the layback, chewed my ankle a bit torquing a foot in a wide crack, took an odd backstep when I felt that I had the wrong side facing the rock, and generally made things look harder than they probably were. 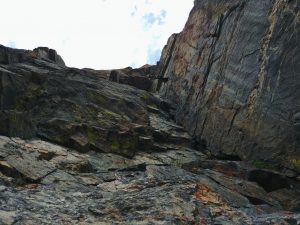 It was a discouraging performance, reinforced when I handed Robert the rack to take the next pitch rather than swapping leads. Here we had the option of taking the Snazette, a long 5.10 finger crack, but neither of us seemed in the mood, so Robert continued up the original route, proceeding carefully as before. Another party had started up the first pitch, but there seemed to be little danger of them catching us. My mind was elsewhere, so I don’t remember much about the pitch other than I was glad I did not lead it, despite again managing to climb it clean. 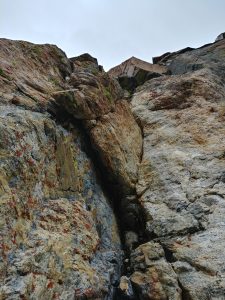 The climbing was easier above, so we returned to swapping leads. I led up a crack to a broad alcove, where the route description said to “step left to a double crack.” Though I knew it would create problems, I clipped a fixed blue cam below the roof to the right before traversing left and placing another cam to hopefully direct the rope around the rock. I looked at a spot in the middle of the roof, backed off, and explored around the corner to the left, but found only rounded, lichen-y rock there. Returning to the middle, I got myself as high as possible, then pulled over a bulge to find a sort of double crack. I got in another piece, then continued a short distance to a sloping shelf where I could build an anchor, unsure which direction to go next, but tired of leading. 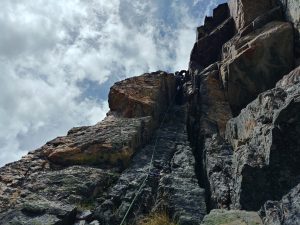 It turns out that I should have continued up and right another fifteen feet, where there was an anchor consisting of two fixed pins and a nut. Robert led past these, then into an easier chimney with an awkward entry. He seemed to find the pitch somewhat beneath him, but I enjoyed it for making me feel somewhat competent for a change. I took the final lead, another short pitch leading left of the 5.10+ triple roofs to easier terrain, where I belayed him up from a slung block. I was cheered by the view and by having acquitted myself well on the last two pitches, and grateful that Robert was willing to come out and make the climb possible. I felt that if, as in previous years, I had a partner and a full month in the Tetons, I would enjoy making some real progress as a trad climber, but that unfortunately will not happen this year. Perhaps I will find myself in the right circumstances here next June, or somewhere else this Fall. 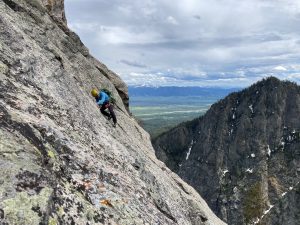 I at least felt smooth and assured on the walkoff, an ascending traverse on class 3-4 slabs followed by a steep and often faint use trail down a gully. Fortunately I found the correct route the first time, because another promising ledge below the one it follows cliffs out at a waterfall. We returned to the trail, and crossed a couple of minor snowfield on the short hike to the start, where I went back up the climbers’ trail to fetch our packs. The group below us had rappeled after the hard pitches, and there was another pair on the route likely planning to do the same. I suppose this is faster than topping out and walking down, but I felt that the upper pitches were still enjoyable, and it is not much of a hardship for the follower to carry a pack with shoes, food, and water. But I’m not a climber…

It turned out to have been an excellent day to climb the route. Though it is on the north side of the canyon, it faces southwest and is therefore shaded for most of the morning. High clouds kept the temperatures reasonable at lower elevations, and the strong west wind was mostly blocked by the crest. The route ended up taking something like ten hours car-to-car, more than either of us had expected, but not an embarrassingly or exhaustingly long day. We both had the energy for another solid outing the next day, but unfortunately the forecast called for wind and rain, and Robert was leaving that Monday. This one climb may be enough to keep my trad skills from completely atrophying, but not enough to lead to any improvement.

South side of Death Canyon

View from a belay

Is this the right one?