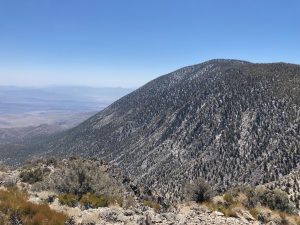 After repeating some terrain in the Inyos near Lone Pine, I was headed north when I remembered Waucoba Mountain, a prominent mound near Big Pine at the northern end of that range. Its approaches normally require quite a bit of dirt road driving, but I had my bike with me, so after some quick research, I turned southeast on 168 and the initially paved Death Valley road, then pulled off to camp at the junction with the Saline Valley Road’s northern end. There I had no cell service, passing a quiet night before watching the full moon set and the sun rise on the Sierra. 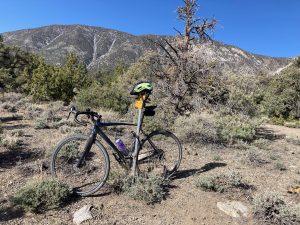 The road into Saline is graded smooth enough for a passenger car, but too washboarded for any car you care about. This is almost as miserable on a bike, but at least you can weave back and forth or hug the shoulder to find the smoothest lines. My mapping program directed me up a rougher, steeper road in a wash to shortcut a bend, but I made it to the “trailhead” without incident, locking my bike to the wilderness sign before taking off up the fading roadbed. 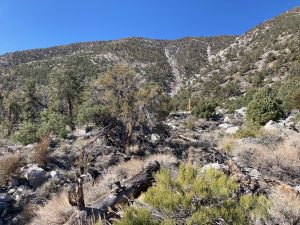 Though this seems to be a standard route on a DPS peak, and I saw a few cairns, there is no trail, but fortunately the terrain is mostly easy travel, soft dirt dotted with piñons, prickly pears, and granite boulders. Dodging these, I made my way generally uphill and left toward an indistinct east ridge, occasionally checking that I was roughly following the track I had downloaded. Where the ridge steepened and became more defined, I put out more effort, enjoying the workout as I climbed a mixture of open slopes and game trails. There was some snow lingering on north and east slopes, but it was still firm in the morning, and mostly avoidable. 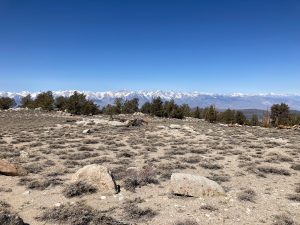 There are two similarly-high boulder-piles on the summit plateau, with one having a large cairn and ammo box containing the register. I leafed through to find a few familiar names as I admired the Palisades to the west; the view east to Death Valley was hazy and unremarkable. I checked the time, then decided to follow my track and add on neighboring Squaw Peak, shorter but better-looking as befit its name. 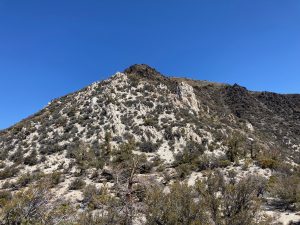 I ate the last of my food as I hike-jogged down easy terrain to the saddle, then ground out a hot, steep, loose, brushy climb up Squaw’s ridge. There were fewer entries in its register, and therefore a higher proportion of familiar names. I am no desert rat myself, but have been playing the peak-bagging game long enough to recognize them. I briefly admired the similar views then, thinking of the rising heat and my uphill ride to the car, followed the track down Squaw’s southeast side toward the trailhead. This was steep and loose, with brush, short cliffs, and miserable talus getting in the way at times, but still fast, with stretches of boot-skiable dirt and scree.

Back at the bike, I drank some water, then set off for a jostling ride home. I followed the main road around its bend, passing one of those huge overlanding vehicles built from what looks like a surplus military vehicle. I saw a few more vehicles on the climb out, mostly Tacomas, likely headed to and from the Saline Valley hot springs, and finally reached my car around 2:00. I had just enough time to wash the disgusting dirt and sand from my feet, put my bike back on the car, and grab some snacks before driving back to Big Pine and cell service to catch up with the world, glad to have finally checked this minor landmark off my list.

Garbage Lands to the east