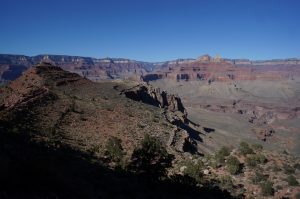 Grinding out the South Kaibab climb, jogging some flatter sections but not wanting to put in maximum effort, I reflected on the fact that it will be 40 years this fall since I first hiked down that trail. The Grand Canyon is therefore a special place for me, so while I prefer mountains and generally dislike deserts, I always find excuses to return. I will never be a Canyon obsessive like Harvey Butchart, who sussed out all the Redwall breaks allowing passage from Rim to River, but the place has enough intrinsic interest outside the nostalgia.

In this case, I realized that several of the buttes are climbable at grades I can manage without a rope, including Brahma Temple, Zoroaster (“ZOE-roast-er”) Temple’s easier, higher, and less popular neighbor. While it may be approachable directly from the North Rim, the most common route takes the Zoroaster approach from the Clear Creek Trail. A couple of people I follow on Strava had recently done it in a day from the South Rim, confirming my belief that doing so was reasonable, and I even found a decent map on a blog I had run across before. 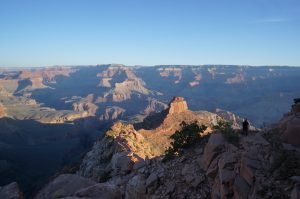 Not knowing how long it would take me, but also not wanting to waste time running the initial descent by headlamp, I decided to start around dawn and bring a headlamp just in case. I camped off one of the Forest roads just outside the east entrance, then drove into the park around 6:00. Given the popularity of Rim-to-Rim-to-Rim, I expected the picnic area parking lot across from the Kaibab trailhead to be full, but there were only a half-dozen cars. I took my time getting ready, then set off in a light overshirt, with 2500 calories and a cup of water in my pack. I passed the expected backpackers at the trailhead, then took some guy’s birthday photo before starting down. 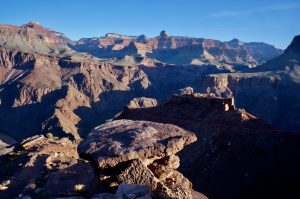 I had jogged the road to the trailhead, and felt good taking the descent at something like a genuine run, though the average grade of about 13% makes it a bit too steep to be comfortable. While some of the surface is pleasantly smooth, much is either rocky and chewed by mules, or split by endless equally-spaced steps. Because every man and beast falls into the same rhythm on these steps, they quickly develop hollows filled with dust behind them. This means that the best way to run without tripping is to land on the wooden retaining logs themselves, placing extra strain on one’s calves. While the trail no doubt sees more traffic than ever, there was less (mule) urine and feces than I remembered, a pleasant surprise. 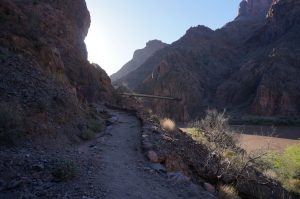 I made the descent from Rim to River in about an hour, mostly enjoying the descent, then was hit with a concentrated dose of my least favorite parts of the canyon. First, I got off the bridge to find a mule train stopped at the Bright Angel ruins while a Navajo-looking guide talked at length about the former inhabitants. Since they were stopped in the middle of a narrow part of the trail between a cliff and the ruins, I could not pass. The cowboy at the other end said they would be moving on in “a minute,” but it was more like ten before the two guides and their line of soft, bored-looking dumplings trundled past. I ate a sandwich and stewed about the oblivious entitlement shown by packers everywhere as they harm the vast majority of trail users. Shortly after finally starting, I passed a fat, sullen ranger packing a pistol. I was initially irritated at her, but soon transferred my ire to a system that takes caring for one of the world’s most beautiful places, and turns it into a soul-crushing menial job attracting and creating the attitude of boredom and petty authority found in mall cops. 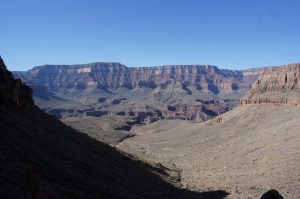 Stopping at Phantom Ranch, I drank as much as I could, then filled up my two-liter bladder for the dry, hot part of the day before jogging up-canyon to the Clear Creek trail. I was tired of the trodden and familiar corridor trails, so it was pleasant to head out into the Park’s less-traveled regions. I passed a surprising number of backpackers (as in “three”), who had taken in enough solitude to be cheerful meeting a stranger. Near where the trail crosses the first major wash below Zoroaster Temple, I left it to follow the west branch toward what I thought was the correct break in the Redwall. 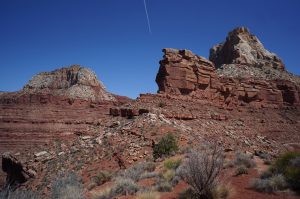 I found enough cairns and footprints to reassure me that I was on the right track, but it was still essentially cross-country desert travel, either in the rocky wash, or up the mixture of limestone choss and thorny plants to either side. It turns out that a trail emerges left of the wash as it steepens near the gap, but I missed it on the way up, instead slogging up the loose slope. The route’s first difficulty is a dryfall in the Redwall gap, avoided by third class climbing to the right. To my irritation, I found a rap anchor above this detour, nylon trash left by Real Climbers too incompetent or lazy to scramble down easy terrain they had previously ascended. Oddly, I found no similar detritus above the more difficult terrain above, a bit of class 4 on the left wall bypassing a second step.

Two large cairns marked the top of the break, at a saddle between an unnamed butte and Zoroaster’s long west ridge. Here I found an intermittent use trail, as climbers approaching the butte were forced onto a single feasible path. I also found two well-used tent platforms, though I would have preferred starting earlier from Phantom Ranch to carrying gallons of water to this dry camp. The trail disappeared above the platforms, but the terrain suggested trending left to get around the first Supai cliff bands. While it is not one of the Canyon’s steeper sections, the Supai has enough hard layers to force one to weave back and forth looking for weaknesses. Most of these seemed to be on the left/north side of the ridge, requiring much side-hilling on packed dirt. 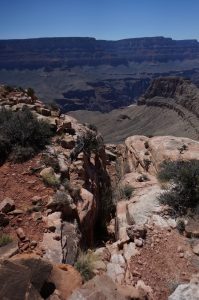 I eventually found some cairns leading to the first break, two low fifth class corners leading back and up to the ridge crest. Not having done any climbing in awhile, I was hesitant on the gritty sandstone, but eventually found my groove. Above this cliff band, I looked again to the left, then found cairns leading right to an improbable slot leading through the next. From there, a long stretch of easy walking on the crest led to the base of the main obstacle, a tall layer of cliffs below the Hermit Shale and Coconino of upper Zoroaster Temple. 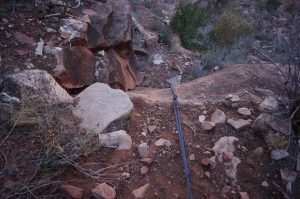 Here there was a single, clear path, boot-prints in the dirt and mud leading on a long left traverse to an amphitheater where the single high cliff was eroded into smaller, manageable sections. The route weaves back and forth to find their weaknesses, with two permanent hand-lines on the most difficult ones. I first tried to climb both without touching the lines, but quickly realized that the necessary smearing on gritty sandstone in running shoes was beyond my current skill and confidence. With the knotted ropes to grab, neither pitch presented much difficulty.

Above, I followed the main trail up loose garbage, then descended to the saddle with Brahma Temple, where I found only a single set of old prints. While the summit register suggested that 5-10 people per year climb Brahma, but it is far less popular than Zoroaster, which holds a destination route for Real Climbers. The near side of Brahma is too steep to climb, forcing another long side-hill on steep red dirt around its left side. Once the Coconino became more broken, another convoluted route with some class 4 bits led to the summit ridge, where some walking and a couple of short steps led to the summit. 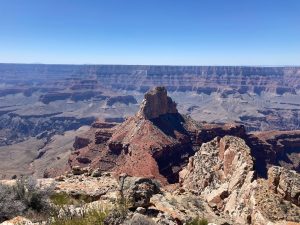 Brahma Temple is about as high as the South Rim, so it commands a fine view of Zoroaster nearby and below, Wotan’s Throne to the east, and the Gorge in both directions. It also has cell service, so I texted a couple friends as I huddled away from the wind and perused the summit register. It had taken me a bit over five hours from the South Rim, but nearby NAU is a strong running school, so I was not surprised to read that someone had done it in 4h07 a couple years earlier. I ate about half of my Mexican calorie puck (La Molienda Mazapan), then got tired of the wind and began retracing my steps. 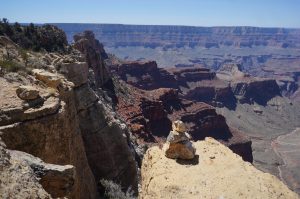 The off-trail portion was only slightly faster on the way down, as the loose desert ground, particularly the limestone, somehow manages to simultaneously grab at your shoes, remain unstable, and be dangerous to fall on. I had some minor trouble retracing my route down the Coconino, having to backtrack and take a slightly harder line in a couple places, then got back into the groove. I tried side-hilling around Zoroaster rather than climbing to the trail, though I doubt it saved me much time. I followed the trail below the notch, hiked the wash, then jogged what I felt like of Clear Creek on the way back to Phantom Ranch. 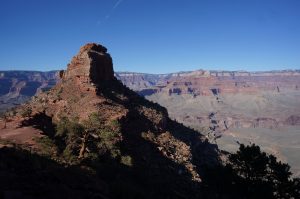 I lingered in the shade near the canteen, drinking a liter o water and filling up another two, then eating one of my last two bars while listening to the resting hikers. I suppose I could have tried to put in a fast time, but it didn’t seem worth the effort, so while I jogged the descent to the Colorado and parts of the climb, I mostly just walked. Two more mule trains passed me near the bridge, but I saw almost no people between there and the Redwall hut, giving my mind time to wander as I rhythmically climbed the endless steps. Above the hut I encountered the tourist hordes come to watch the sunset. The final switchbacks were a disgusting traffic jam, with the trailhead crowded enough that I did not feel like lingering. Instead I strolled back to my car, where I ate continuously for an hour before driving out of the park again in search of a place to camp.

Sidehill side of Brahma