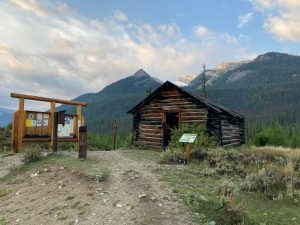 I woke to rain. Pounding, drenching rain starting around 2:00 AM and continuing until dawn. It felt like a repeat of the storm that had scuttled Renee’s big plans earlier by dumping several inches of fresh snow on the high country, making the talus treacherous and quick travel impossible. I lay half-awake in my car until it stopped, then emerged as it cleared to see how bad things looked. There was fresh snow on the peaks on either side of the Green River, but it did not look too deep, and I was already well into my record attempt. Sometimes sunk costs are a useful motivator. I stuffed more things in my pack, ticking them off on a checklist on my phone, the only way I could hope to pack effectively in my groggy state. I shoved my sleeping bag into my bivy with my pad, rolled the whole thing up, and strapped it under the topper, then started up the Highline Trail around 7:00. A mile or so up, I fortunately realized I had forgotten my down jacket. Dropping my pack, I muttered and jogged my way back to the car, where I grabbed the jacket and shoved another couple handfuls of trail mix in my mouth. It was the last food I would eat without carrying it on my back for… eight days? I was not sure.

This part of the journey was a big question mark. The thirty 13ers of the northern Winds, stretching from Ellingwood/Harrower in the south to Downs in the north, are connected by a network of ridges. Many have only a couple of known moderate routes, which are often highly condition-dependent. I had some link-ups in mind, but none was certain. All of the approaches are long, ranging from fifteen to over twenty miles. The shortest is from Elkhart Park, well south of all the peaks. Of the other two, from Trail Lakes and Green River Lakes, the latter is overall closest to the peaks, but requires a twenty-mile trail slog to reach the southern end, and a mysterious cross-country route via Clear Creek to reach the northern. I assumed that I could figure out Clear Creek on the return with a lighter pack, and could grind out the slog south along the Highline Trail with a full load. 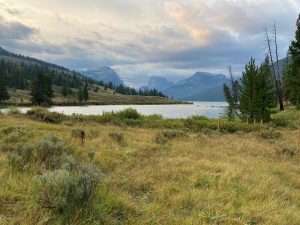 The Green River Lakes, and Squaretop beyond them, are built on an inhuman scale, so the first part of the hike feels endless. It does not help that the trail follows a rolling path nearer and farther from the water. The trailhead parking lot had been packed, so I was not surprised to meet a horse-packer and several backpacking parties on their way out. These hearty folk seemed in good cheer despite having endured a vicious soaking only hours before. I was already hating my load by the time I crossed the bridge and started up the switchbacks leading to Trail Creek Park, which bypass an impassably narrow part of the Green River gorge. I refilled from a rivulet where the trail levels off, then made a further climb to Vista Pass, where I stopped to eat some pop-tarts and admire my first view of a 13er, Whitecap Peak, across the Green. 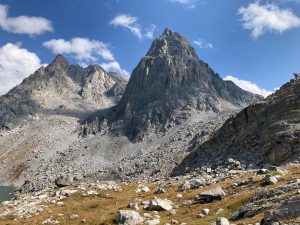 From here, the trail descends slightly as it returns to the Green, then climbs through talus to Cube Rock Pass. This was once apparently a built-up stock trail, but has decayed in places to a line of cairns. Shoulders sore from the unaccustomed weight, I descended toward Peak Lake and dropped my pack to look for a spot to camp, despite its only being mid-afternoon. Fortunately frustration at a lack of flat sites, plus time without a heavy load, caused me to remember my mission. I put the pack back on, hauled it south over Shannon Pass, then dropped it at a flat spot to tag Bow Peak. This would save me some time the next day, and make use of the unexpectedly pleasant evening weather. 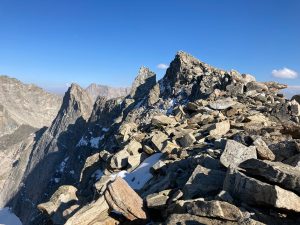 From the pass, I trended up and right on grass, then talus and slabs, finding nothing harder than class 2. I stayed right of the crest along the sloping summit plateau, only approaching the northwest ridge as I neared the top. The steep north sides of Bow, Arrowhead, and American Legion Peaks held some recent snow, and behind them rose the higher Titcomb and Dinwoody peaks in craggy, snowy glory. At last I felt I was in the mountains where I belong, and I reveled in the view, forgetting the day’s grind and the uncertainty ahead. Surprisingly, I also had cell service — the northern Winds are narrow enough that one often has line-of-sight to a Pinedale or Dubois tower — so I messaged a couple of people to share the views and my excitement before returning to camp.

My evening routine was reasonably efficient. First, roll out my bivy with pad and bag already in it, and inflate the pad. Second, boil a pot of water while putting breakfast in my thermos: half a cup of whole powdered milk, half a cup of oats, and a quarter-cup of trail mix. Third, add some of the boiling water to the thermos and use the rest for dinner: four ounces of pepperoni, a half-cup of grits, and a generous pour of olive oil. Finally, rinse the pot, brush my teeth, stuff most of my clothes into the inflater sack for a pillow, and wriggle into my bag for the night. I rarely sleep well while backpacking, and there was almost no moon, so I had plenty of time to admire the Milky Way and brilliant stars so high and far from civilization. Tomorrow the serious peak-bagging would begin.

Stroud from near Bow

Whitecap, Split, and Twin from Bow