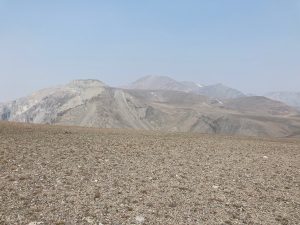 Francs Peak is the highpoint of the Absaroka Mountains of northern Wyoming, and the range’s only peak above 13,000 feet. It seemed to be the most efficient place to start my speed climb of Wyoming’s 13ers in terms of driving time, so I drove up the rugged road toward Kirwin to camp before beginning my ordeal. This, the first of several long drives on dirt roads, starts off smooth and gets progressively worse, ending with three stream crossings that were Element-able late in a dry year, but could be scary earlier in the season. Since the peak would not take a whole day, I killed some time in the morning turning my remaining bread into PB&Hs, then finally got impatient and started around 10:00. Francs is notorious among peak-baggers for grizzlies congregating on its summit to dig for moths, so I was pleased to see a backpacker in a monster truck park a polite distance away, then start up the trail ahead of me. 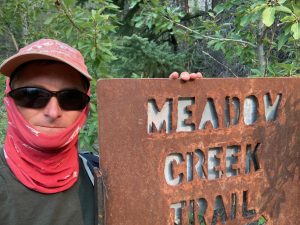 And so it begins

The Meadow Creek trail is obscure on the valley bottom, but becomes clear as it switchbacks up away from the Wood River valley, with views of impressive choss-cliffs to the south. At least, there are views when it is clear, as it was the afternoon I drove in. The morning I started it was heinously smoky in the valley, so I inhaled a bit of California with each breath and saw only outlines of the surrounding mountains. I passed a backpacker on his way down as I climbed the steep trail, and finally caught the one I had seen in an open meadow below the cabin ruin on the topo map. He turned out to be a sheep hunter headed up to meet some friends, getting a head-start on the next day’s start of the season. 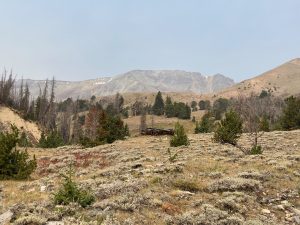 I lost the trail in the meadows, then regained it as it climbed out of Meadow Creek Basin along the south fork. I left it again where it switchbacks up toward Galena Basin, turning uphill toward the undulating 12,000-foot plateau leading toward Francs. I was entering grizz-land, and no longer had a decoy to follow, so I was on my guard. I found plenty of bear prints and signs of digging on the plateau, but it was apparently past moth season, because I did not see a single bear. Much of the terrain was runnable with a bit of care, but I did not try too hard, since I had much ground left to cover and my left knee was still a bit sore from my fun but ill-advised run up Wind River Peak some days prior. 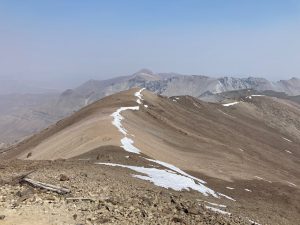 The plateau finally narrows to a ridge beyond a significant dip to the head of the Francs Fork, and a decent use trail appears, with the users seemingly more ursine than human. Trudging up the ridge while trying to avoid the worst of the fresh snow-patches and loose talus, I was surprised to see two other people descending the northeast ridge. They were probably returning to a vehicle parked at the end of a high jeep road on that side of the peak. Since neither my car nor my bike is nearly capable enough for such a road, I had dismissed it. I reached the summit around 1:20 PM, finding it windy, cold, and dismal, with barren slopes all around fading into smoky skies. The rock smiley face on the other ridge cheered me a bit, but I did not linger. 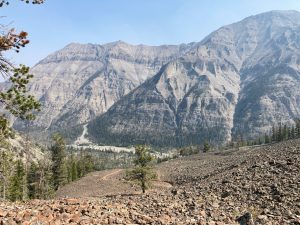 I made it back through bear-land without incident, and even saw a bull elk with thirteen cows and calves as I cut down to the trail. I spoke a few minutes with the hunter at his camp, telling him that I had not seen any sheep. He seemed somewhat pessimistic about his chances of spotting any in the smoke, but had a comfortable tent and enough food for a week, so perhaps he was around long enough for the smoke to clear. I jogged some of the trail down out of impatience, then jumped in the car for the long drive to the Bighorns. The first part of the drive was familiar, the middle part boring but the drive up through Tensleep Canyon was interesting, passing by limestone cliffs popular among climbers. The dirt road to the West Tensleep trailhead was somewhat washboarded but in good shape, and I arrived just before dark to set my alarm for 3:00 AM and get some sleep in the overnight lot.

And so it begins