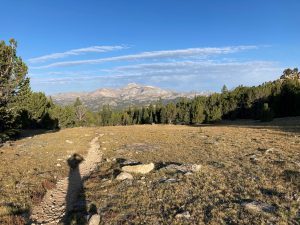 Wind River Peak is the Winds’ southernmost 13er, standing alone some 35 miles south of the rest, with only a handful of significant peaks between it and the high plain south of the range. I needed to retrieve my car near Lander, and Renee wanted to do something semi-big with her last day in Wyoming, so we settled on running Wind River. By historical accident, the traditional fastest known time (FKT) for the peak follows a counterclockwise loop from the high Worthen Reservoir, as the peak is a similar long trail and class 2 boulder-hop from both the south and east. The men’s record is far beyond my reach, but the women’s record (as usual) looked soft, so Renee went for that while I ran the loop clockwise. I wanted to see a lot of new territory, to hedge my bets lest another early storm ruin my future plans, and to see if I still had some speed in me despite advancing age and a lack of focused running this season. 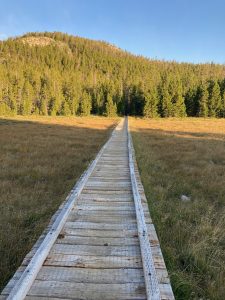 Temperatures felt ideal as the near-full moon set and the sun rose around 6:30 over the reservoir. I felt energized starting off in shorts and an overshirt, carrying my little running pack with about 3000 calories and a liter of water. As the trail gradually climbed through the woods, I stashed my overshirt on my pack, where it would remain for most of the rest of the day. What a contrast with conditions only two days earlier! There were two significant water crossings along the way, of Roaring Fork and Stough Creeks. Most locals seem to bring horses or wading shoes for such things, but I found acceptable dry crossings downstream of both, as it was too early in the day to splash through and soak my shoes. 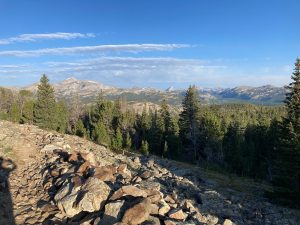 I got my first glorious view of Wind River Peak at the unnamed col around 10,600′, where the trail descends to Stough Creek and the Middle Popo Agie River. After an hour or so spent in the woods, the sudden sight of acres of bare granite was inspiring, though Wind River Peak looked distressingly far away. Feeling a strong runner’s high — those are some good drugs, self! — I took off at a respectable run down the other side of the pass, maintaining a decent jog through the flats past Stough Creek and down to the Popo Agie. This section of trail was moderately annoying, consisting of gradually-climbing rollers. The trail crosses the river in a meadow/swamp before Tayo Park, and here I did not find a dry crossing, though it looked like someone had tried to build one using some stepping-stones and a too-thin log. I made it to the log, then took off my shoes to cross the last bit, losing a sandwich from my pack as I bent over to put my shoes back on. 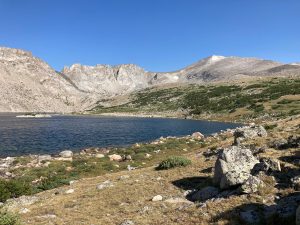 From here, I continued on a clear trail past mysteriously-named Poison Lake, then took the faint but signed fork up toward Tayo Lake. Here the climbing began in earnest, and while the trail was never hard to follow, it became little more than a use trail, with a faint tread in the woods and cairns leading through open meadows. I stopped for water at Tayo Lake, taking an extra couple of minutes to plot my route up Wind River’s south side and admire the sheer face and unnamed pinnacle to the west. From the lake, I found no more than an occasional and faint boot-pack weaving through the krummholtz and up the tundra, and a couple of cairns, which I destroyed. 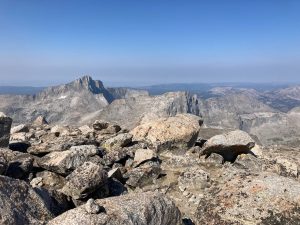 I made good time up the flatter lower slope to the peak’s eastern snowfield, then began to struggle as the steeper slope, bigger talus, and elevation took their toll. As I neared the summit, my eyes were drawn to Temple Peak, a more impressive-looking summit that falls just 28 feet short of being another 13er. Crossing the summit plateau, I was a bit surprised to see two guys sitting by the high point with overnight packs. They turned out to be hiking the Wind River High Route from south to north, just about to get into the Serious Business descending the peak’s steeper northwest side. I noted that I had made the summit in just under four hours, but felt sociable despite my steady effort to that point. We talked for “approximately” 18 minutes, and I learned that one of the guys had done the Great Divide Trail, a rugged route from the Glacier/Waterton border in the Rockies to Mount Robson Provincial Park. I was duly impressed, more so after learning that he had suffered near-daily rain. I must be lucky to have had so many clear days on my summer trips to the Canadian Rockies. 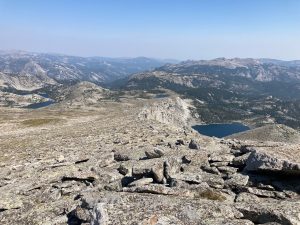 I thought I might see Renee after spending so long on the summit, but she had not appeared by the time I got antsy and started down the peak’s east side. The route circles around Chimney Rock, then follows a broad plateau down to the trail network at Deep Creek Lakes. The upper section is large talus that is slow on the descent, while the lower section is runnable tundra. Unfortunately this is a Wind Rivers plateau, so glaciers have taken a couple of deep bites out of its east side. Not looking at the route on my phone often enough, I strayed too far left and had to regain some elevation to get back on the correct path. In addition to losing some time, I must have missed Renee on this part, as she is generally better at paying attention to maps. 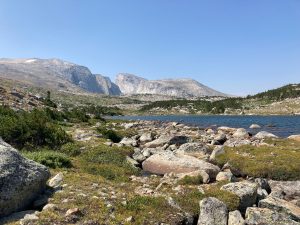 I refilled on water at the highest Deep Creek Lake, then spent another 5-10 minutes talking to a guy from Missouri out on a backpacking trip. He was trying to puzzle out his position using a printed map and compass, which was understandably difficult given that the lakes all look the same, and some of the trails on the USGS map have ceased to exist. Less-used trails in the Winds seem to be in constant flux, with new ones being created by fishermen and climbers while old ones quickly fade. Thus I found it helpful to load my phone with both USGS maps for older trails, and OpenStreetMap-based maps for newer ones. Of course, I also found trails both old and new that appeared on neither map, such as the one leading down from Middle Mountain.

The trail down Deep Creek and the Popo Agie to Sheep Bridge was largely pleasant running, with occasional climbs long enough to walk, cram down food, and look at the map. I was starting to feel my lack of running this summer, but kept a respectable pace. The 500′ climb from Sheep Bridge back toward Worthen Reservoir was a slog, but less than half the climb out of the Popo Agie going the other direction. It passed quickly at a determined walk, though I had to wait for a couple of minutes while trail workers from the Montana Conservation Corps blasted rocks to re-route the trail. This part is outside the wilderness boundary, and is therefore being made more comfortable for mountain bikers. I passed more hikers in the final mile, including a group of four women with identically-huge packs, a sure sign that they were with NOLS.

Reaching the parking lot, I was pleased to see Renee’s van was still there, and that she had not been forced to abandon the effort and drive for home. The whole thing was a bit over 32 miles the way I went — about a mile longer than the most efficient route — and took 7h43m. Subtracting my ~30 minutes of socializing, that is on the order of Gabe Joyes’ original FKTs in 2014 and 2015, though nowhere near his 6h19m 2016 effort, or the newer, faster times going up and down via Deep Creek. I was encouraged to see that while I am likely a bit slower than I was in my thirties, I am also uncompetitive on these kinds of courses because standards have risen. Running the route in the opposite direction would probably be faster because the east slope route is easier to follow on the way up, and because one can just splash through streams toward the end. However I prefer my way, for the sudden first view of the peak, and the more pleasant running down Deep Creek. In any case, the loop was worth doing, even if I did not stand a chance at a record.